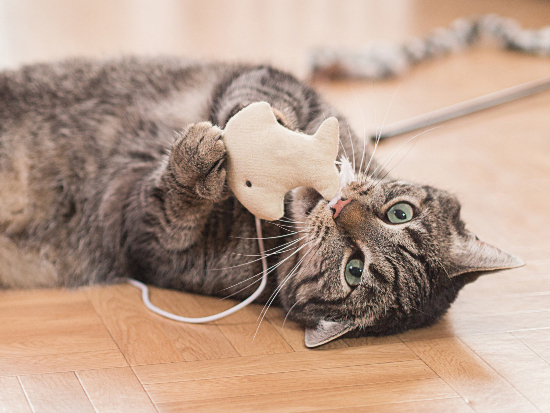 We still have a lot to learn about the feline species — it’d be so much easier if they could just talk to us — but over the years we have discovered quite a bit of new information. The reasons behind why they purr (it’s not always what you think) or why it seems like they give their prey such a rough go are a few examples. Today we’re busting some of the more common cat stereotypes and myths out there so that you can learn more about this adorable meowing species.

This is almost the truth, but not quite. Cats are what we refer to as crepuscular, which means they’re generally most active when the sun is rising or setting. In nature, this is the best time for them to hunt. Ever notice how they seem to have the zoomies at the crack of dawn or just as the night’s winding down? Also, you might have observed that cats sleep a lot — roughly 12 to 16 hours of the day. They’re happy to sleep during the darkest hours of night and especially midday.

Speaking of hunting, let’s talk about the way cats seem to “play with” and bat live prey around forever until, well, said prey is a goner. This is primarily a defense technique. If the prey is potentially venomous (like a snake or an insect) or if it has its own defense mechanisms (like a porcupine), then their batting motions ensure only brief contact while still maintaining some level of control. Also, by batting it around, they are able to see if the prey has already died (making it safer to consume). Finally, if the prey is larger than the cat, their goal is to wear the animal out so their ultimate attack is more efficient and victorious.

Cats are known for their agility and quick reflexes. In many scenarios, their bodies are equipped to get them out of the worst of trouble (this is partly where the ‘nine lives’ myth comes from). However, this doesn’t mean cats always land upright. If they’re too low to the ground before falling, their reflexes sometimes aren’t quick enough to get them into the right position for a feet landing. Also, just because a cat does land on their feet doesn’t mean that falls don’t hurt them. Falls can affect their joints, bones, and muscles no matter how graceful it looks.

Myth 4: It’s Impossible to Train Them

While cats certainly like to do it their way, they can absolutely be trained. At the very least, they can be guided away from bad behaviors — such as scratching furniture or begging for food — but cats can also successfully learn new tricks or be taught how to use a human toilet.

While it’s true that cats often do purr when they’re happy, that’s not the only reason. The truth is that we still have a lot to learn about why cats purr, but research tells us that purring can be a way for cats to express emotions (happy or otherwise) to their human owners, mothers, or other cats, and to bring themselves relief or calmness when stressed or hurt.

Myth 6: They’re Independent Creatures Who Prefer to Be Alone

It’s easy to paint cats as cold and sassy creatures — especially when you compare them to the never-ending loyalty and goofiness often associated with canines. Cats are actually social creatures, and though they generally fare better on their own than dogs, that doesn’t mean they don’t miss you. In fact, a study from September 2019 found that “cats display distinct attachment styles toward human caregivers.” Validation for cat lovers everywhere (who probably already knew this to be true)!

Giving your kitty the best health care with a full recovery can be expensive. Having pet insurance can help cover the cost (as much as 90%) on these infections and injuries, but also you’ll sleep easy knowing you can say “yes” to all treatments and medications.