An Inoperable Brain Tumor Is Vanquished with Radiation 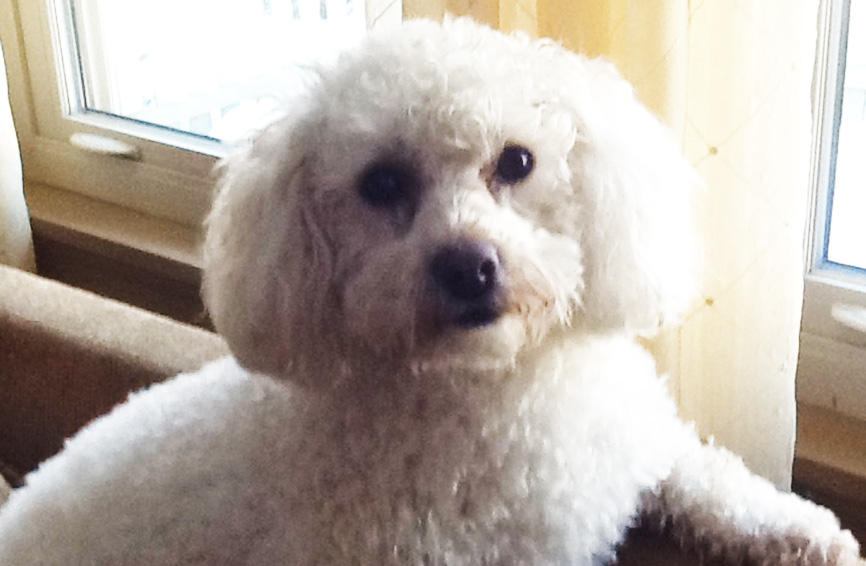 Haley is a six-year-old mixed-breed poodle who would be the class valedictorian and the star athlete if she were a person.

She’s a highly active little dog who loves long walks and outings with the family, where she’s known to chase rabbits and chipmunks if she gets the chance. She’s keen to show off her skills at amateur agility on a course set up in 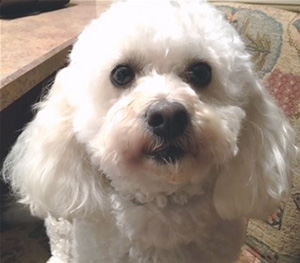 She is so bright that she passed both the Animal Protective Foundation Canine Good Citizen course and a Therapy Dog International test when she was little more than a year old. After all that activity, she settles into becoming a snuggler when she gets to know you, and she performed years of therapy visit work at a local hospital.

Healthy Paws customer Kathy and her husband Mike adopted Haley from a shelter when she was just a pup, and she’s been keeping them on the go ever since.

When Haley started having vision trouble in May, Kathy took her to the veterinarian, who recommended she go to a canine ophthalmologist for an exam.

They suspected a condition where the retina degrades and quickly causes blindness in dogs, which was scary enough.

However, her test for that condition came out negative.  She was then referred to a neurologist to investigate other causes for the progressive blindness. At this point, optic nerve damage was suspected, but Kathy was told there was a chance it could be a brain tumor.

The next day a magnetic resonance imaging (MRI) scan and spinal tap were performed, revealing that Haley did have a brain tumor.

“We were absolutely devastated,” Kathy said. “Her tumor was not operable, and the only hope to prolong her life with was radiation therapy.” 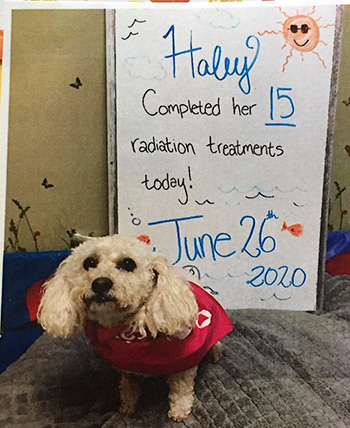 Kathy and Mike live in a rural part of New York state, and there were no veterinary hospitals nearby where Haley could be treated. They traveled to the closest vet hospital that could perform radiation – two and a half hours away in Yonkers, N.Y.  – and consulted with a vet radiation oncologist.

They learned that Haley needed three weeks or 15 radiation treatment sessions. Thankfully, they had family in the area to stay with during the treatment.

Haley handled the radiation well, and within the first week, her vision started to improve.

“We watched her track a bird that was in the yard. It brought us to tears,” Kathy wrote. “Two weeks earlier, she was bumping into us and furniture.”

After the radiation protocol was complete, the only other medical need was an anti-inflammatory medication, which Haley took for several weeks.

Back to spotting rabbits

A month after completing her treatments, she visited her neurologist, who was amazed at her progress. She was back to normal. Going forward, she will have follow-up visits with her neurologist periodically and another imaging scan in six months to ensure the tumor remains recessed.

Haley is back to spotting rabbits and chipmunks and, just like before, she chases them like crazy.

Cancer is the #1 disease-related killer of senior pets. The Healthy Paws pet insurance plan covers cancer care, including diagnosis, radiation therapy, chemotherapy, hospitalization, surgery, medications, and rehabilitation, as long as it is not pre-existing before enrolling in pet insurance.

“If we had not had Healthy Paws, we would have had to take a serious look at Haley’s options.  Having this insurance allowed us to seek out and do what was the absolute best for her.  Several of my neighbors and friends have said they could not handle the cost if it were their pet,” she said. “I am encouraging everyone to please get Healthy Paws Pet Insurance.  It could save your beloved animal’s life.”