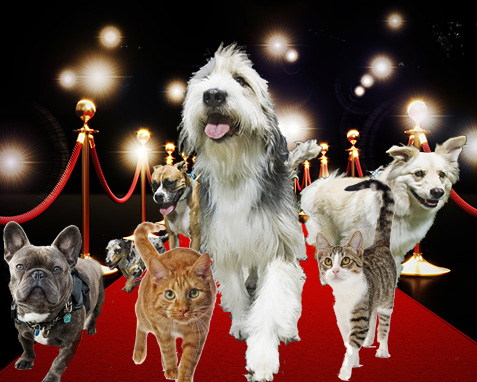 Will director Jane Campion’s Netflix drama “The Power of the Dog” sweep the Oscars with its 12 nominations when the 94th Academy Awards are presented in Hollywood on Sunday?

Will Ariana DeBose playing Anita in Steven Spielberg’s “West Side Story” carry the day for best actress, or will Kirsten Dunst finally get her due for her multi-layered performance in “Power”?

Will Kenneth Branagh finally win a directing or screenplay writing Oscar for his film “Belfast,” about the “troubles” in Northern Ireland, or will Paul Thomas Anderson win those prizes for the coming-of-age comedy-drama “Licorice Pizza”?

Before we cuddle up on the couch with our pets to find out who will be taking home the coveted statuettes, we wanted to imagine which stories, pets, and pet heroes from the past year deserved recognition.

So, roll out the red carpet as we present our own Academy Awards for pets – the Paws Awards, if you will, based on pets that made us laugh, cry or want to hold our furry friends a little closer.

This story about Bryson, an eight-year-old boy who sold his prized Pokémon cards to save his puppy Bruce from a deadly case of Parvo has the story arc of an epic drama. When Bryson sets up a stand outside his house to raise money to pay his Labrador puppy’s unexpected vet bills, it goes viral. Not only does he raise enough to save his dog, an outpouring of support from around the world ultimately raises $28,000. He donates the extra to help other dogs in need of medical care. That’s our kind of happy ending.

Casper, an adorable border collie who “talks” to his dad Ryan Dykta, has our vote for best soundtrack. We could listen to him “talk” about his canine sister Daisy and his stuffed unicorn Simon all day long. Of course, Casper is not really talking, but his expressive face and perfect synchronizing of his mouth with words sure make it look like he is.

A four-year-old hound mix named Boone survived heartbreaking treatment as a puppy, and the abuse was so bad he had to have two back legs amputated. Fortunately, a family with a soft spot for special needs pets took him in as a foster and were so moved by the pup that they adopted him two days later. They had him fitted with a wheelchair to improve his mobility, which immediately changed him. He wagged his tail for the first time —and he’s been a dog on a mission ever since.

The hound’s sweet nature and enthusiasm for life made him perfect for becoming a therapy dog. He now goes to children’s hospitals and wherever he is needed to help reduce stress in others, and he serves as an ambassador for all special needs pets. In addition to this pet Oscar we are bestowing, Boone was also voted the “Hero Dog” of the year by the American Humane Society.

Istanbul, Turkey is a city of 15 million people known for its relaxed attitude towards stray cats. A group of volunteers has built elaborate houses for their feline neighbors. Inside the cat houses, the cats find donated food and toys, cushions, and boxes to keep them out of harsh weather.

The project started in 2008 when an interior architect named Didem Gokgoz regularly passed through a park on her way to work and saw stray cats trying to find places to keep warm in winter. She had the idea to build small containers where cats could shelter from the weather. At first, people scoffed, but today, cat houses can be found all over Istanbul – in parks, outside hotels and shops, and on school campuses.

It turns out that eyebrow your dog so cutely raises when he hears the crinkling of a snack bag is a behavior that evolved because of how humans respond to it. The first detailed analysis comparing the anatomy of dogs and wolves found that the facial musculature of both species was similar, except above the eyes. Dogs have a small muscle that allows them to intensely raise their inner eyebrow, which wolves do not.

The authors suggest the inner eyebrow-raising movement triggers a nurturing response in humans because it makes the dogs’ eyes appear more prominent, more infant-like, and resembles a movement humans produce when they are sad. Researchers surmise that people’s preference for expressive dogs resulted in selective breeding of eyebrow lifters.

So while your sweet pooch may not know they are acting when they grace you with their “puppy eyes,” it’s the result of centuries of practice charming humans.

Last summer, a woman in Lehigh County, Pennsylvania was perusing the local Humane Society dogs for adoption website when she came across a photo of a tan pitbull-rottweiler mix. She froze, as the dog resembled a dog named Kovu that she had lost two years before. He even had a scar over one eye that she recognized.

Aisha Nieves had adopted Kovu when he was just a puppy. One day she came home to find him gone and, despite searching all over town, could not locate him. He was picked up by the Humane Society weeks later when he turned up in someone’s yard. A family adopted him in the fall of 2019. Two years later, he was returned to the shelter by the same family, who were then facing eviction. That was when Aisha spotted him on the website and recognized him.

By all accounts, Aisha’s reunion with Kovu was a tear-jerker. “I sat there, waiting for them to bring him out. Then, something made me look up, and I locked eyes with him and saw him wagging his tail,” she said. The staff said Kovu let out an excited squeal.

Darius Brown was eight years old when his sister taught him how to sew a bow tie, and he started making them for friends at school. After Hurricane Irma, he learned that hundreds of dogs and cats were left homeless in Florida and Puerto Rico.

Darius said he realized he could help them stand out in crowded animal shelters if he made them look hilarious and adorable by wearing a bow tie. He dropped off about 25 pet-sized bow ties at a shelter in New York City, and the ties reportedly helped the pets get adopted faster. Four years later, Darius is still sewing bow ties for homeless pets. He estimates he’s donated more than 600 bow ties for dogs and cats in shelters