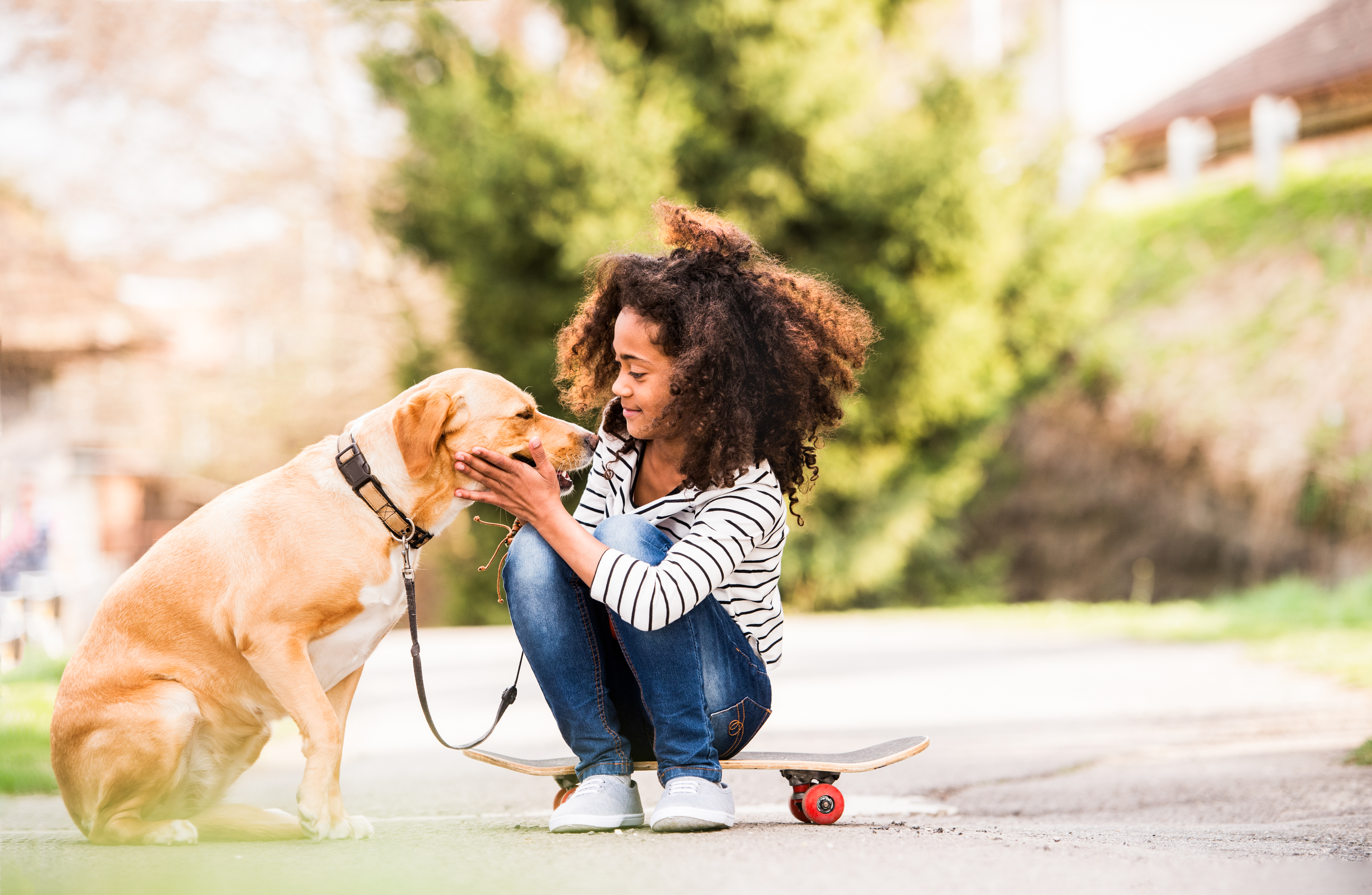 We receive so many emails from happy pet parents every day that we wanted to make sure all these pets got a chance to be featured on our blog! In our ongoing series, “Happy Tales,” we get to share a little bit of these pets that not only make their families joyful, but those of us at Healthy Paws too!

Already the parents of a healthy 2 year old Goldendoodle, Larry and Donna decided that “he needed a friend,” so they rescued a 12 week old Labradoodle (Lilly) from what can only be described as “a cold, terrible place.” Unfortunately, what followed was a veritable nightmare – Lilly was diagnosed with Parvo and stayed a week in the hospital. “We visited her as often as the staff would allow, but cloaked in gowns and not allowed to touch her,” explains Larry. “Then the vets called to us come in one evening and allowed us to hold her; in essence, to say goodbye to her but we would not give up on her!” Overnight, little Lilly rallied and began to improve, defying all odds. She went home and was by Larry and Donna’s side constantly, thriving in her recovery. They signed up Lilly with Healthy Paws in an effort to help protect her in the future, and unfortunately, it was a good choice. “She began having seizures occasionally which prompted a visit to the veterinary neurologist who diagnosed her with epilepsy,” says Larry. They’re maintaining her good health and report: “Every day is a blessing and every day I thank God for the two of them! Two ‘Doodles can only be described as ‘Twice the Joyous Mayhem!’”

Pet parent Carla writes: “Jake broke his leg in a freak accident running into a bench at the dog park. When the vet saw the x-rays he asked if Jake had been hit by a car. Jake is a greyhound and can run more than 40mph – he IS the car!” Jake’s fracture and follow-up was intense: “He ended up getting orthopedic surgery and now has a rod, a plate, 4 screws, and 2 wires in his femur. He does amazingly well and only limps a little at times. He’s 9 years old now and a little grey (pun intended), but he still loves to go for rides and greet everyone he sees.”

The Power of Brussels Sprouts

Pet parent Elizabeth writes: “My 8 year-old Dachshund-Jack Russell mix, Lola, was diagnosed with squamous cell cancer of the tonsils in early January. When I brought her to the vet, she had lost weight, had no bark, and seemed to have difficulty eating. The vet found and removed the tumor, but warned me that this is an extremely aggressive form of cancer and that it had most likely already metastasized to her lymph nodes.  I have [Healthy Paws], so I was ready to do whatever could be of help. I was referred to an oncologist. The oncologist did a CAT scan and told me there were lesions in her lung, so nothing can be done, other than palliative radiation should the tumor recur. Lola was given 3 months to live.”

“I could not just let her die, so I read all the veterinary and animal literature I could find on what inhibits or kills cancer cells in animals – and I read that broccoli, kale and brussels sprouts have been found to [inhibit or kill cancer cells in research on animals]. She is a very picky eater, but likes brussels sprouts as long as they have butter in them. Also [I read that] a diet low in carbs, high in protein and with healthy fats was found to be helpful. She has been eating brussels sprouts with olive oil and a little butter every day, as well as chicken breast. I’d like to get some other fruits and veggies into her, but she won’t eat them!”

Cut to today: “It is now 3 months post diagnosis. She has regained her weight and her bark, and to all appearances is symptom free, active, and happy. It’s too early to know if she will be a survivor, but I am sharing this in case anyone else’s dog is in a similar position. So far, she is defying the odds.  By the way, she may be the cutest and most wonderful dog on this earth— an unbiased opinion.”

Pet parent Kira writes: “I rescued Tiger when he was 6 months old from the local shelter in Baltimore. He was the sweetest pup, full of energy and love for people and dogs. Just before his second birthday, he started struggling to get up and down off the couch and sitting or standing up seemed painful. We went to the vet and he had a partial tear of his cranial cruciate ligament (CCL). Because he was young and active, the vet suggested TPLO surgery to stabilize his knee, removing part of the bone and implanting a metal plate.”

“I picked up a groggy confused little pup in his yellow surgical pajamas (which were the cutest) and we headed home for 12 weeks of hard, nerve-wracking recovery (during which human mom had her own surgery and recovery process)…. Week 14, Tiger took his first off-leash romp in over 4 months, overly excited to be playing with his best friend again, and tore his second CCL!”

“He was back in surgery a couple of weeks later (blue PJs this time) followed by another 12 weeks of recovery. Thanks to the incredible team of people who took care of him at Skylos Sports Medicine and with the help of Healthy Paws, Tiger is fully recovered, happy, and even more agile than he was before. He loves to go for long walks and romps with his best friend who has had the same surgery in her legs – we call them our bionic puppies! Thank you for all of your help, I do not think we would have been able to get him back to his full self without the surgery (and therefore without Healthy Paws insurance)!”