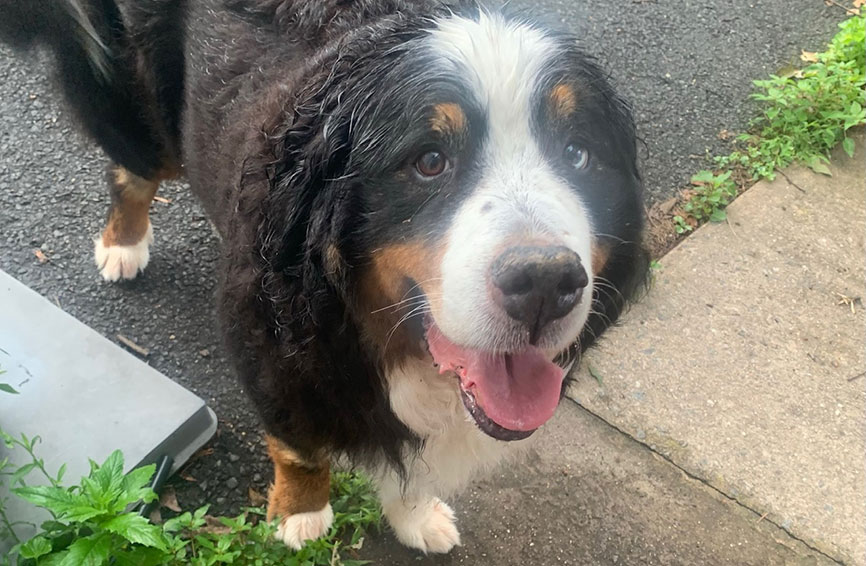 “A true ‘gentle giant’ family dog, he is endlessly patient and gentle, which has been a godsend since we had our daughter, who is now a toddler.  He loves nothing more than lying on the couch with his family on a rainy day and playing in the snow,” she wrote.

The seven-year-old loves going on long, but leisurely walks and sprinting off with giant fallen branches that cross his path, she added.

Last March, a friend’s dog knocked him over and he began having trouble walking on the hardwood floors.  She said his back legs seemed to have some lameness, and it was scary to see the big guy having trouble getting around.

Buster had a herniated disc – and something else

Michelle was able to get Buster to a veterinary neurologist and the vet diagnosed Buster with a herniated disc and recommended spinal surgery.  However, the images taken of the herniated disc showed something else – a tiny mass on his lung.

“We were fortunate to stumble on Buster’s tumor early, prior to him having any symptoms of cancer, while treating for another issue,” Michelle said.

They postponed his back surgery in favor of an oncology consult and found themselves quickly scheduling surgery to remove one of Buster’s lung lobes.  He got through surgery and his multi-week recovery went well. However, their ordeal was just beginning.

Tumor found to be aggressive cancer

They started Buster on chemotherapy immediately.  While most dogs don’t have any side effects at all from chemo, unlike humans, a small percentage (10-20 percent) of dogs have some side effects, and a tiny portion of those have a reaction that can be fatal.

Buster was one of those unlucky few that had a serious reaction.  While completely fine after his first dose, about two weeks after his second dose, he was less interested in treats and was leaving some of his food behind.

“Our extremely food-motivated dog had never found a food (or piece of garbage that smelled like food) that he hadn’t consumed instantly.  Soon, he was refusing all food and treats and we were unable to give him his arthritis medication,” Michelle said.

Back to the oncologist

Michelle and Buster returned to the oncologist, where tests showed that his liver was inflamed, and near failure.  He immediately went into intensive care, where he stayed for almost a week. He was hydrated and fed intravenously, hoping it would get him over the hump and allow his liver to heal.  While in the ICU, his liver values were so high they could not be read by the machine without being diluted, Michelle said.

Once Buster was finally able to come home, he still refused food.  Michelle and her husband Taylor took him to the vet daily for help getting his many medications down (anti-nausea, appetite stimulant, liver supplements, pain, etc.).

“This was all time-consuming, upsetting, and of course, expensive,” she said.

Finally, their patience paid off and Buster finally started eating, much to their relief.

How is Buster doing now?

Now, nine months after the treatment, Buster is eating well and his liver values are back to normal.  They take him in to be checked every three months, and so far, he is showing no signs of cancer.  Given his condition when he was in the ICU, that’s remarkable.

“The vet techs who cared for him during his emergency stay nicknamed him their ‘miracle boy’ since it is so rare for dogs to survive the poor liver outcomes of the dogs who have that negative reaction to the chemo,” Michele said. “Every morning walk, mid-day game of fetch, and evening snuggle reminds me of how grateful we are that our best boy is here with us.”

Buster’s health issues added to a stressful year for Michelle’s family, as they also are first-time parents to a one-year-old. Being able to act quickly and decide on treatment despite the cost, was one less stressor for the family.

“Our family is so thankful that we didn’t have to worry about the cost of his (very expensive) treatment and we could focus on helping him get better.  We have been with Healthy Paws since we brought him home as a puppy and recommend pet insurance to all our friends when they bring home new fur babies!,” Michelle said.

Michelle signed Buster up for pet insurance because Bernese dogs are known for having orthopedic issues, especially hip dysplasia, and she wanted to be prepared if he needed costly hip replacement surgery.

She chose Healthy Paws because her research indicated it had the best coverage for hip dysplasia. She didn’t expect to need insurance for cancer treatment, but she has been impressed by the coverage for the unexpected event.