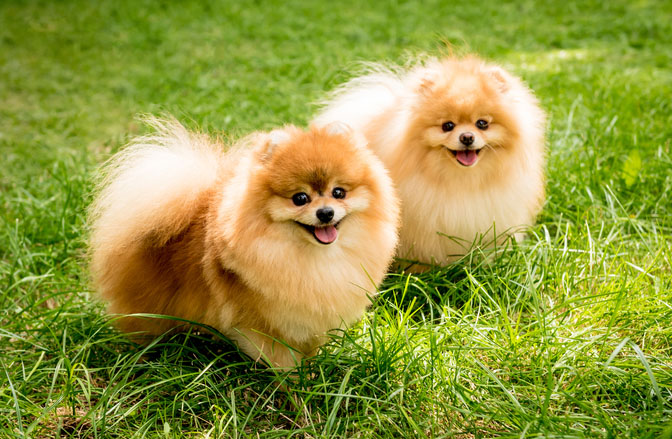 Reviewed for accuracy on November 11, 2021 by Jennifer Coates, DVM

Pomeranians have a history of being favorite dogs among royalty and also have fun personalities that everyone can enjoy. These dogs have a luxurious coat of fur and a tiny size that often defies their bold and vivacious mannerisms.

As purebred dogs, Pomeranians adhere to a specific set of breed standards for their appearance. But aside from how they look, many people enjoy having these dogs as household companions because of their love of learning tricks, intelligence level, and sense of independence. Although they are fairly easy dogs to be around, they tend to be frequent barkers, which is something that prospective pet parents should be aware of. 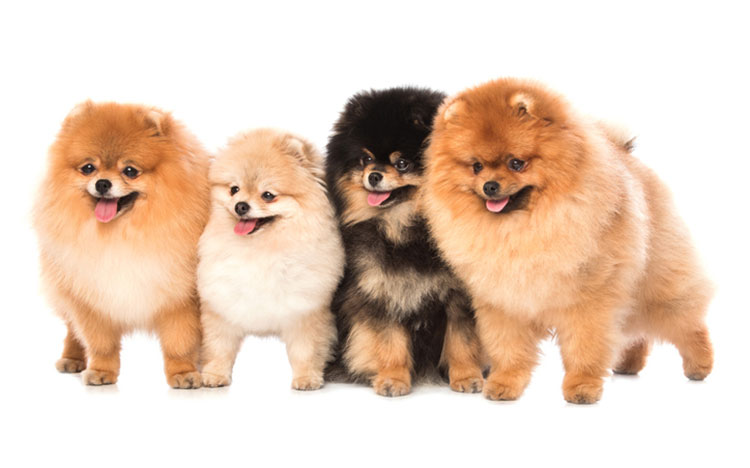 The Pomeranian is a toy size dog that only reaches a weight of between three to seven pounds when fully grown. Show dogs should be four to six pounds. Pomeranian dogs grow to become around seven inches tall at the shoulder, on average. These dogs reach their full height at about 10 months of age, which is sooner than many larger dogs.

Pomeranians have a square-ish body shape and a fluffy tail that comes up over the back. They also are naturally active dogs. There is very little difference between the size of male and female Pomeranians.

Here’s how big you can expect your Pomeranian to get as he or she grows. 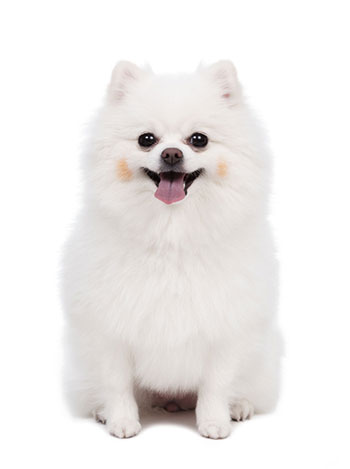 Pomeranians are interesting dogs because despite their tiny size, they actually descended from larger sled dogs (Spitz breeds). Therefore, Pomeranians have some of the same traits as their larger counterparts, such as being agile, intelligent, and active. They often act like they are much bigger than they really are and are even known to challenge large dogs. A Pomeranian’s size makes it ideal for apartment living, although these dogs do tend to bark, which might not work very well for your neighbors.

Pomeranians are affectionate dogs but not the best choice to have around little kids who play roughly. These pups love to play, but they are safest with older children who understand that they aren’t stuffed animals and need to be handled with care. Cat lovers often have Pomeranians in the house because these pups tend to get along with feline friends too. These dogs make great pets for people who are busy or can provide limited outdoor activity because they are pretty independent and can get most of their exercise indoors. They tend to be most comfortable in moderate weather.

If you give these dogs plenty of exercise and keep them in moderate weather, you might just find your new best friend in a Pomeranian. As you get to know a Pomeranian’s personality, here’s what you can expect based on his or her breed characteristics.

The history of the Pomeranian can be traced back to parts of Northeastern Europe that are modern-day Poland and Western Germany. This is where these dogs were bred down from the much larger, Arctic sled dogs from the Arctic. Pomeranians are descendants of Icelandic and Lapland sled dogs.

In some countries, the Pomeranian is known as the Zwergspitz. Queen Victoria loved Pomeranians, which made them more famous than ever before. The queen was an avid breeder and exhibitor of Pomeranians, even being credited for taking the breed down to its current size from about 30 pounds. The first Pomeranians were typically between 20 and 30 pounds. Marie Antoniette and Wolfgang Amadeus Mozart also had Pomeranian dogs and helped them to become well-known throughout the world.

Pomeranians are members of the Spitz Group of dogs and were officially recognized as a breed by the American Kennel Club in 1888. In 1988, a Pomeranian won Best in Show at the Westminster Kennel Club Dog Show. The breed remains very popular today across America and in Europe.

With their tiny bodies, Pomeranians have lots of fur in a double coat and come in nearly two dozen colors with different patterns and markings. Most Pomeranians are reddish or orangish in color, however. They are also known for their smile-like facial expression and foxy faces.

Here is an overview of the breed standard information for Pomeranians. 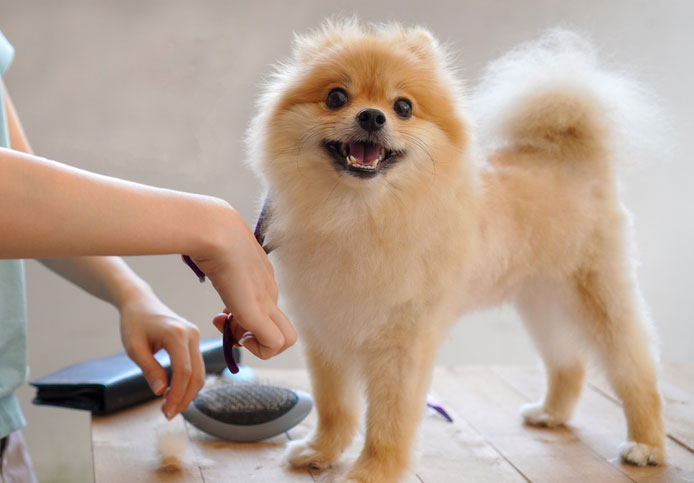 Pomeranians do well as indoor dogs as long as they get enough exercise and mental stimulation. Many apartment dwellers live with Pomeranians. These dogs love going for walks, but pet parents should know that they are sensitive to heat, so it’s important to limit time outdoors when it’s particularly hot outside.

Here are some general tips for taking the best care of a Pomeranian.

Fortunately, most Pomeranians are healthy dogs, but if you are getting your dog from a breeder, make sure that the breeder has checked for health conditions that are common to this breed. These conditions include luxating patellas, collapsing tracheas, congestive heart failure, and seizures. You’ll want to see a copy of the Orthopedic Foundation for Animals screening from the puppy’s parents before making a Pomeranian purchase. Also, the National Breed Club recommends that the following tests be conducted for Pomeranians: patella evaluation, cardiac exam, and ophthalmologist evaluation.

These are some of the most common health issues that arise with Pomeranians.

Diet and Nutrition for Pomeranians

Most adult Pomeranians will thrive when eating a high-quality, nutritionally complete and balanced dog food. Puppies should eat puppy food until they are around 9 to 10 months old. If you feed your Pomeranian homemade dog food, make sure you are working from a recipe that is designed by a veterinary nutritionist and that is appropriate for your dog’s age and health status.

Feed the amount of dog food needed to keep your pet slim. You should be able to see your Pomeranian’s waist and feel (but not see) the ribs without having to press too hard. In general, puppies need more calories per day than do adults, but a dog’s needs will vary with his or her activity level and other factors. Don’t leave food out all day for a Pomeranian to graze on. Divide the total amount of food for the day into at least two meals for adults and three to four meals for puppies. Place the food out in a bowl at approximately the same time each day.

Talk to your veterinarian if you have any questions about your Pomeranian’s diet or health.

Where to Adopt or Purchase Pomeranians

The American Pomeranian Club has a mission of preserving this breed of dogs and encouraging ethical ownership and breeding of Pomeranians. This organization’s website has resources for where to buy a Pomeranian and also rescue contacts for Pomeranians in need of a good home. Also, the American Kennel Club Marketplace lists Pomeranian puppies for sale that are cared for and raised by breeders who follow the AKC’s rules and regulations.

Pomeranians are wonderful tiny dogs, but they’re not the ideal pet for everyone. If the lifestyle and characteristics of a Pomeranian appeal to you though, you might in interested to learn about similar and related breeds, such as these:

Regardless of whether your Pomeranian is a puppy, a senior dog, or somewhere in between, he or she depends on you for basic needs and lots of love and care. Healthy Paws has been rated the #1 pet insurance company and is here to help you save money on your Pomeranian’s vet bills and treatment needed for accidents and injuries. We offer free and instant quotes to help you plan for your Pomeranian’s future. There are no maximum limits on claim payout and no per-incident, annual, or lifetime caps on coverage.

Contact us for your Pomeranian pet insurance quote so that you can enjoy many more fun moments together with your beloved, tiny pup.