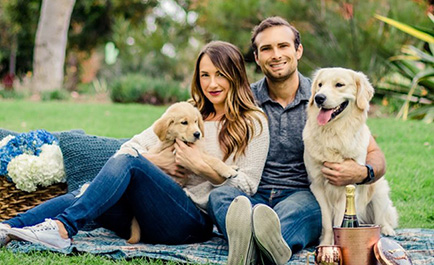 While it may be unthinkable to dog and cat lovers who live in the U.S. and other Western countries, the custom of raising animals we consider to be pets and family members to be sold as meat is still a sad reality in some Asian countries such as China and South Korea.

When animal lovers Kyle and Amanda Jo learned about this practice, they decided that rather than be down and daunted, they would try to do something about it. They started Bunny’s Buddies, a nonprofit that aims to save as many dogs as they can by buying them, working with rescue groups in those countries to get them vaccinated and prepared for travel and then recruiting volunteers to fly with them from Asia to the U.S., where they are adopted into loving homes.

The Healthy Paws Foundation, whose mission is to help pet rescues and animal shelters by providing grants to help fund medicine, food, shelter, and operating costs, has donated $10,000 to Bunny’s Buddies.

The foundation receives part of its funding from the Every Quote Gives Hope™ program, where the simple act of getting a free pet insurance quote from Healthy Paws results in a donation.

Amanda first became aware of the dog meat trade when she saw a post on Facebook a couple years ago.

“I just could not look away and pretend it was not happening. I had to do something! I used my business page platform to raise money to rescue five dogs in China. That then turned to 15 dogs. I then decided to start our own rescue,” she said.

That was in April 2018, and since then they have saved nearly 300 dogs, all adopted out and now living in their forever homes.  To see some of the adorable dogs they have saved, check out their Instagram feed.

Just one success story involved a low energy Golden Retriever named Oliver, who was rescued from a high-kill shelter in South Korea. Amanda met a woman whose husband had recently passed away and who needed some canine comforting. She matched them, and the woman said Oliver became her perfect companion.

“Oliver sleeps next to me every single night and is a total love who fits into our family perfectly. He is such a sweet pup, his favorite thing is holding hands with his people, it’s just adorable!,” the pet parent commented.

Amanda balances managing the rescue while also running two for-profit businesses. Kyle also works a more-than full-time job for San Diego County and dedicates most of his free time to working on the rescues.

How does it work?

The majority of the dogs from Bunny’s Buddies are imported from China and Korea; most of them are from slaughterhouses, meat trucks, meat farms or just strays rescued off the street. Stray dogs are at high risk for execution so getting them off the streets is the key to saving their lives. Volunteers in those countries acquire them and board them in a shelter until they are ready for transport.

Dogs cannot be imported into the U.S. without proper health documentation, immunizations, U.S.D.A. permits, and health clearances. So the dogs that are picked up are vaccinated and spayed or neutered. They are then quarantined for two months.

Bunny’s Buddies has recently leased a boarding facility in China near Hong Kong, which it is running with Karuna Rescue, a China-based group of animal rescuers. The facility will be a place for the dogs to receive medical treatment, play and socialize with other dogs and rest before their long flight to the U.S.

Even if the dog is cleared as healthy, conditions can show up later on or arise after travel, so Bunny’s Buddies suggests taking all adopted dogs to a trusted vet within 24 hours, especially if there are other dogs in the home.

Bunny’s Buddies relies on volunteers to accompany the dogs from their shelters in Asia to major cities in the U.S. on direct flights on Asian airlines, mostly into LAX (Los Angeles), JFK (New York), SFO (San Francisco), SEA (Seattle), and ORD (Chicago).

Adoptive families are asked to pick up their rescued dog from one of those airports. Many new pet parents fly to the chosen airport and then then rent a car to road trip home and bond with their new pet, Amanda said.

Dogs that appear to have major trauma or behavioral issues will go to Bunnies Buddy’s training facilities in San Diego for further assessment before they are adopted out.

People who want to adopt from Bunny’s Buddies have to accept that not much is known about the dogs and they are most likely not potty-trained and probably fear humans. The rescue will disclose any serious needs the dogs have if they are aware. The rescue also can’t tell potential pet parents whether the dogs will be good with kids or cats, since they have not had exposure to either.

Many of these dogs are also depressed, fearful and scared due to the trauma they have been through, Amanda said. Potential adopters should be people that are prepared to confront and conquer any problem that comes their way and who have time to socialize them.

“These dogs have been put through hell and back so having no expectations for them is best. It’s also very hard for us to promise the dog’s behavior. Some dogs are better than others as they may be stolen pets with training, however, others may be totally stray and in desperate need of human restoration. We advise every new home to treat these dogs as if they are new puppies and be prepared to train them if needed,” Amanda said.

Adopters also have to pay a higher-than-average adoption fee, since the cost of rescue, medical treatment, vaccinating, spay/neuter, transport, board, feed and placing the dog in a new home runs about $700-$5,000, Amanda said.  Bunny’s Buddies asks new pet parents to pay about $800-$900 per dog, many of whom are purebred, to offset some of these costs.

Tackling a huge problem, one dog at a time

Trying to save dogs that are far away, when there are so many that need to be saved, takes an emotional toll, Amanda said.

“It is VERY hard to not let my emotions get the best of me. There are so many ups and downs in dog rescue, especially international dog rescue,” she said. “I try and just hold on to the thought that I am doing something about the problem and giving these dogs a new chance at life.”

Ultimately, a shift in attitude toward dogs in some countries is what is needed to end the suffering. China does not have any animal protection laws and this has been a way of life for a lot of people in those cultures, Amanda said.

As people in China improve their standards of living, fewer of them choose to eat dog meat and attitudes are slowly changing. In 2018, 22 percent of Chinese households had a pet, up from 16 percent in 2013. By the end of 2018, there were approximately 67 million pet cats and 74 million pet dogs in China. The practice in South Korea also seems to be on the decline.

“There are many compassionate people in China that also help us a ton,” Amanda said.

People who want to support Bunnies Buddy’s but are not in a position to adopt, can make a donation or buy something off their Amazon wishlist.  The group also needs volunteers who are traveling from Asia on an Asian airline (U.S. airlines won’t transport dogs from China) to agree to have a dog accompany them on their flight (in the cargo hold). To find out about all volunteer opportunities, visit their website.