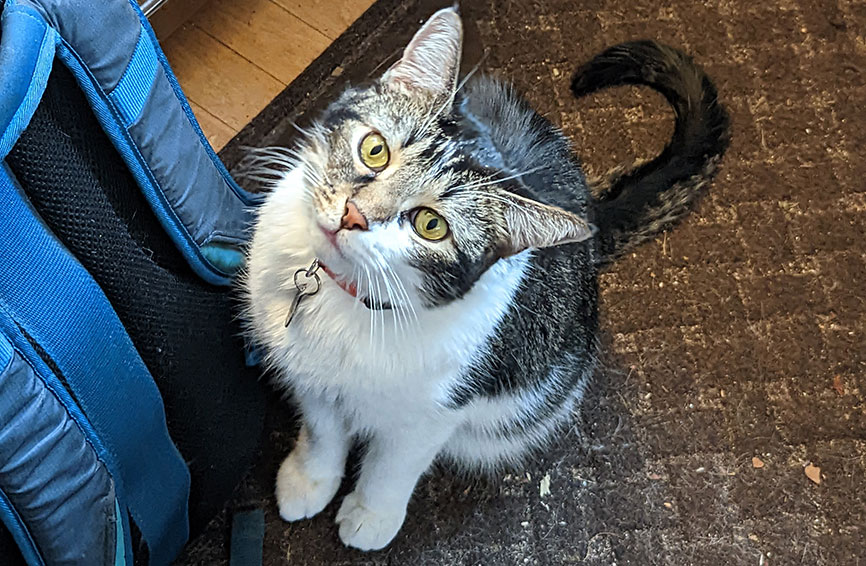 Samwise is a six-year-old tabby cat with charming white markings, majestic whiskers and beautiful green eyes. While he was initially named “Chunky” at the shelter, his adopters knew that was not the right name for him.

“The two of us being sci-fi and fantasy nerds, we decided to name him after Samwise Gamgee from Lord of the Rings,” said pet parent Bryan. In the J.R.R. Tolkien series, Samwise is a hobbit and sidekick to protagonist Frodo Baggins.

Samwise is calm and loves people once he warms up to them.

“If you are sitting in his presence, he will inevitably come over to you and settle into your lap. He greets everyone new to our home and demands to be pet, but only a little at first. He will happily roll over into the dumbest-looking poses for belly rubs, and he has a big rumbling purr-motor,” Bryan said.

Bryan and their partner Katiemae looked around the house to see if he might have consumed something toxic but found nothing out of the ordinary. Within a week, Samwise had lost weight, stopped cleaning himself, and barely used the litter box.

“We were terrified at this point,” Bryan said.

They took him to their local vet, who told them to immediately get to an emergency hospital about 45 minutes away. After several tests, the vet diagnosed him with moderate to severe pancreatitis. They learned that they had gotten him to the vet just in time.

“Another day and his odds of survival would have dropped to as low as 10%,” Bryan said.

Pancreatitis is inflammation of the pancreas, which is the organ that assists in the breakdown of food particles in preparation for absorption into the body.

The condition can be mild, with only swelling of the pancreas, or severe, when digestive enzymes spill into the body cavity, damaging internal organs. An acute (fast-onset) incident of pancreatitis in cats may become chronic or “relapsing,” with recurring inflammation.

Samwise remained at the vet hospital for several days, where he was sedated, fed by a feeding tube, and prescribed half a dozen different medications, special food, and weekly check-ups.

Once Bryan and Katiemae took him home, they had to administer his special food and medications several times a day for months.

“It was a very stressful time for us,” Bryan said. They added that having pet insurance at least eased the anxiety over the financial aspect of his treatment.

How Samwise is doing today

Now, nearly a year later, with Samwise on a special diet of low-fat dry kibble and medications, he is healthy, happy, and better than ever. Bryan said the new kibble must be tasty enough because their other two cats seemed to prefer it to their own.

If anything, Samwise seems to have a new lease on life and is more affectionate than before.

“Samwise is now the friendliest, most loving cat you will ever meet. We call him ‘the Ambassador’ now because he MUST greet every new person who comes into our home and give them the tour of his favorite places in the house. He was a trooper during the whole ordeal, and we are super happy and grateful to have him back,” Bryan said.

Bryan combined having pet insurance with Care Credit, which many people use to cover health and wellness expenses for people and their pets. Bryan said the company does not charge interest on purchases of more than $200 in the first six months if the bill is paid off during that time.

They said the Care Credit covered the deductible and upfront costs until the claims were paid out.

“We were so, so, SO lucky and grateful to have Healthy Paws insurance,” they said. “It’s been a huge benefit to our furry family and to our mental and financial stability. We can focus on their quality of life and provide them with silly toys to play with, instead of fearing we may lose them without warning. People sometimes are baffled by us not having children, but to us, our cats are our children.”

Bryan and Katiemae decided to get pet insurance for all three of their cats a few years ago after Samwise’s brother Roo had eaten an entire tissue. The tissue impacted his intestine, and the vet had to remove it surgically. The total bill was close to $5,000, which they were not prepared for, Bryan said.

They settled on Healthy Paws insurance for the low premiums and deductibles and the 80 percent reimbursement option.

“So thank you from Samwise, his loving parents, his brother, Roo (aka Rooseph), and his little sister, Resa,” Bryan said.