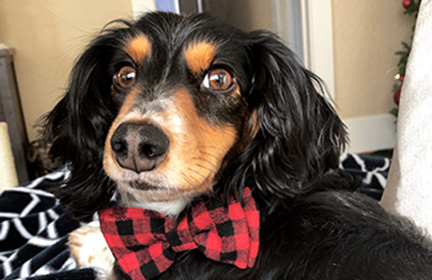 Jordan rescued her miniature Dachshund Charlie when she was in college, and the two have been inseparable ever since. He brings love and happiness to her and everyone he comes in contact with. He loves wearing bow ties and having his belly petted.

“He’s the most loyal animal I could have ever been blessed with. He’s traveled all over with me across the country. When you’re in his presence, you can’t be upset, he doesn’t allow it! He’s been there for the biggest milestones in my life and I can’t imagine being without him,” Jordan said.

Jordan usually returned home to Charlie waiting on the door step for her to come in so he could jump all over her and lick her face. So she was distraught when she returned home one night and he was laying on the couch shaking, “wagging his tail as if he realllyyyyyyy wanted to come see me, but couldn’t,” she said.

Charlie was still able to walk, but something was clearly wrong as he didn’t snuggle up to Jordan as usual. Jordan took him to the vet the next day where neuro and orthopedic exams came back as normal. He was walking around and suddenly he couldn’t use his back feet. 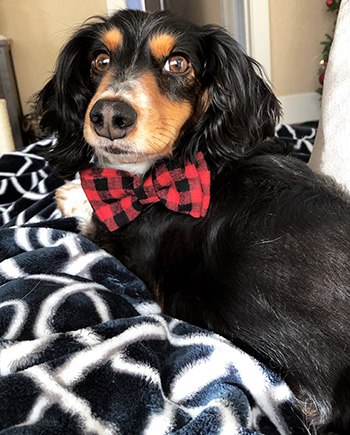 The vet then took hip and knee radiographs to rule out any dislocations as well as possible fractures or breaks. Again, everything appeared normal.

Jordan, who happens to work at her vet’s office, knew that Dachshunds are prone to back problems due to their structure, so she suspected something was wrong. She asked for a second neuro and orthopedic exam and this time, he failed both.

“He couldn’t walk, was dragging his feet, and was not in control of his back end any longer,” she said.

She rushed him to the emergency hospital where they said it was most likely intervertebral disc disease. They started him on a pain regimen and cage confinement. Overnight he got progressively worse until he could no longer go to the bathroom on his own or have any mobility in his back legs.

The vets prepared him for anesthesia and took an MRI which identified where his discs had herniated into his spinal canal, pushing on the spinal cord nerves. They performed surgery to correct the damage, which was successful.

Following the surgery, Charlie required weeks of physical therapy, but now two years later, he is about 90 percent recovered. He still receives maintenance therapy every two weeks, but he runs around like a puppy again.

Jordan said having most of the cost of the surgery and rehabilitation covered gave her the confidence to do what was needed.

“He’s my family or fur baby and I will do anything to give him the best care he needs for recovery and for the rest of his life to make sure he does not have to endure this pain and suffering ever again,” she wrote. “I was so unbelievably blessed that I didn’t have to think twice about doing what was necessary for my baby.”

Jordan first started thinking about pet insurance when she saw a friend without insurance struggle after her dog became very ill quickly and she had to scrape together the money to pay for treatment.

“It was the best decision. I have friends who use Healthy Paws and had nothing but great things to say. I did my research and thought Healthy Paws was the best option! I couldn’t have been more grateful for my decision since,” she said.

Prioritizing the health and well-being of your pets means you’re a great candidate for pet insurance. Find out more about dog insurance (and cat insurance) and start by getting a free quote. Bonus: each quote means a donation is made to homeless pets.