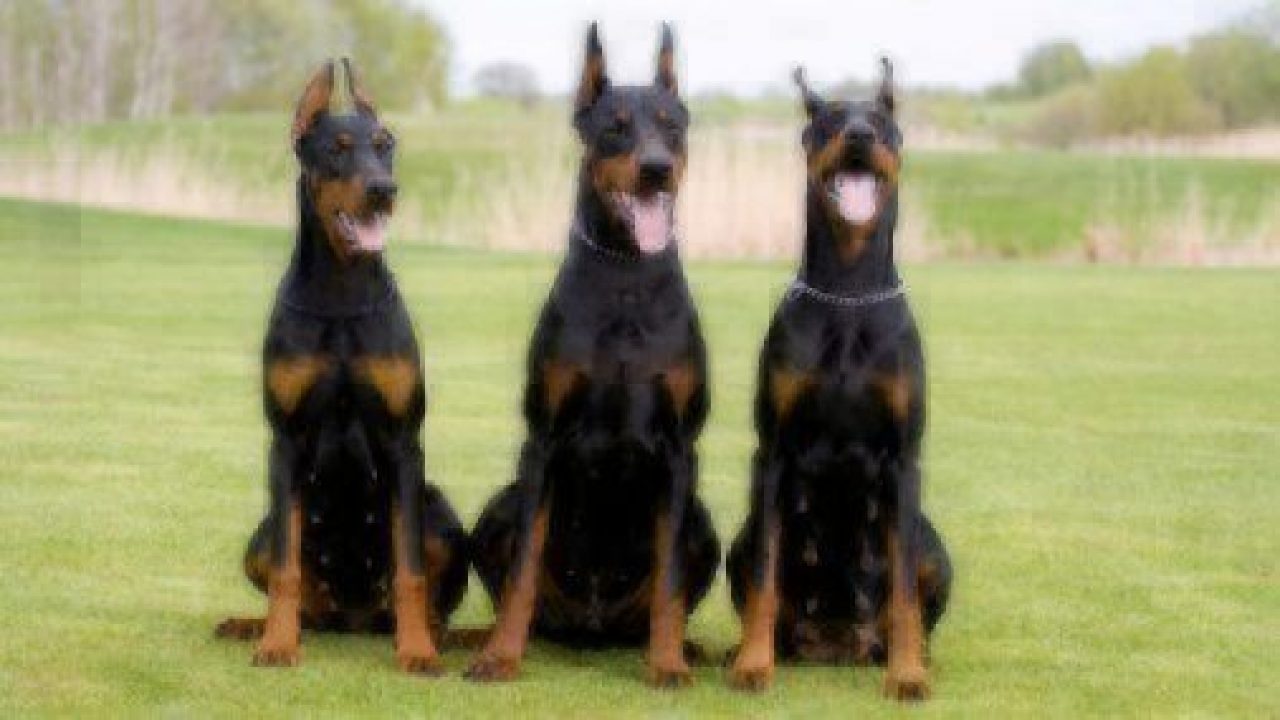 With its ever-alert perky ears and robust, muscular build, the Doberman Pinscher is the type of dog that you can’t help but admire and respect. As you might have guessed, they’re a preferred choice as family guard dogs because of their unwavering loyalty towards their owners, as well as that “don’t mess with me” vibe they give off to suspicious folks and potential intruders. To see if this regal canine is a fit for your family and lifestyle, and to learn more about their history, check out the info below.

At first glance, the Doberman Pinscher may look a little tough, and they certainly have the potential to scare off any unsavory characters when they sense danger. That said, don’t let their formidable appearance fool you. The Doberman, or “Dobie” for short, is staunchly loyal, highly intelligent, socially dexterous, notably gentle, undeniably courageous, and surprisingly playful. 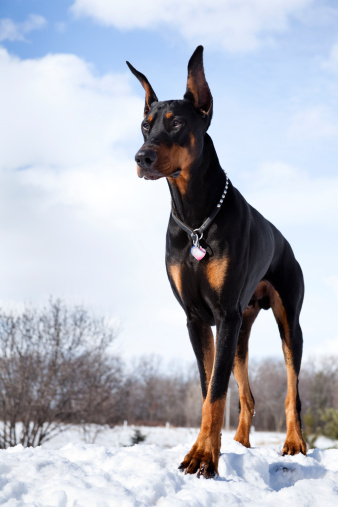 This breed very much enjoys the companionship of its owners and is known for being highly affectionate with immediate family and trusted friends. In fact, they don’t like hanging out alone and crave consistent physical interaction and mental stimulation, more so than a number of other breeds. That said, they do best with owners who don’t travel much and who enjoy being very active with their pooch. If you’re a park-loving, backyard-dwelling, outdoor enthusiast who’s dedicated to training and hanging out with your dog, the Doberman Pinscher can be a very rewarding pup to own.

Physically, the breed is on the large side at 60 to 100 pounds. They have a regal and elegant build with a glistening black and brown coat, oversized ears, and elongated snout. Their average lifespan is 10 to 12 years.

The Dobie’s origin starts with a character that gets a bad rap, much like the breed itself. In the late 1800s, a German tax collector named Louis Dobermann set out to breed an intimidating-looking, reliable dog that could accompany him on his rounds and guard his money at home. Dobermann crossbred a number of different breeds, including Rottweilers, greyhounds, German Pinschers, and black and tan terriers in his effort to craft the “perfect” guard dog.

After Dobermann passed away, other breeders took over and focused less on the dogs’ appearance and more on their personality. The breeders’ goal was to create a “super dog,” and they ultimately created a breed that was a little too headstrong and aggressive. Another breeder by the name of Otto Goeller then took over and shaped the Doberman Pinscher into a more stable pedigree, which is the dog we know and love today.

The breed was aptly dubbed the Doberman Pinscher, and its first public appearance occurred at a German dog show in 1897. In 1900, the German Kennel Club formally recognized the breed, and in 1908 the American Kennel Club followed suit. Today, Doberman Pinschers are a top choice as military and police dogs and, as you know, valiant and fearless guard dogs for families.

The Dobie is considered a healthy and robust breed, but like any pup they’re prone to certain ailments. The most common health issues for this breed include:

Additionally, Dobies are prone to hypothyroidism, which is tied to diet and can cause epilepsy, and they’re also frequent sufferers of skin disorders. Pet parent Kim has been raising Dobermans for over 20 years, and her 2-year-old, named River, has had quite a few vet visits due to skin infections and allergic reactions.

“Dobermans don’t shed that much, but I started sweeping up a lot of River’s hair, which was very unusual,” says Kim. “That’s when I took him in to the regular vet who recommended a food study. When that didn’t work, we went directly to a canine dermatologist.”

River lost patches of his fur along his back and ended up getting staph infections in those areas of hair loss. He’d been itchy, indicating an allergy, but wasn’t suffering from hot spots or any gastrointestinal issues. “When I took him to the dermatologist, he said that the likelihood of food causing River’s problems was actually only 15%! He believes it is environmental so we started allergy shots and a special staph virus injection – it’s not the live virus – to help boost his immune system against the infection. It seems like allergies and staph just go together with River!”

Kim visited her online group for Dobermans as well. “They’re much more into natural remedies like Ultra Oil Skin & Coat Supplement or regimen that includes Vitamin A, Apple Cider Vinegar, and fish oils full of Omega-3s. So we started putting it on his food and then began a grain-free diet as a precaution. We’re still waiting to see some healing!”

River has had some other issues over the years – “he will eat anything!” and this latest sent him to the emergency vet. The culprit? A toothpick ended up getting stuck in his liver. “Even with pet insurance, River’s had some pretty expensive bills. After this last surgery, he recovered so quickly! He’s back to looking impressive while still being spooked by a broomstick.” Lifetime coverage for River has been $20,263 (Healthy Paws reimbursed $15,711 with Kim’s policy of 80% reimbursement rate and $250 deductible), and his chronic skin infections have totaled $1,497 since August 2017 (Healthy Paws reimbursed $891).

Even if you purchase your pup from a reputable breeder and stay on top of annual vet visits, these hereditary conditions can still be present. Consider enrolling in pet insurance early, before the risk of pre-existing conditions, and save up to 90% on vet bills.

Are you the proud parent of a gentle giant? Share a picture of your darling Doberman with us on Instagram by tagging @gohealthypaws. And if you aren’t already a pet parent with us, look into getting a free quote to help safeguard not just your special dog, but your wallet too.