Fizzy’s Pet Parents Save Over $3,500 in Tracheal Surgery 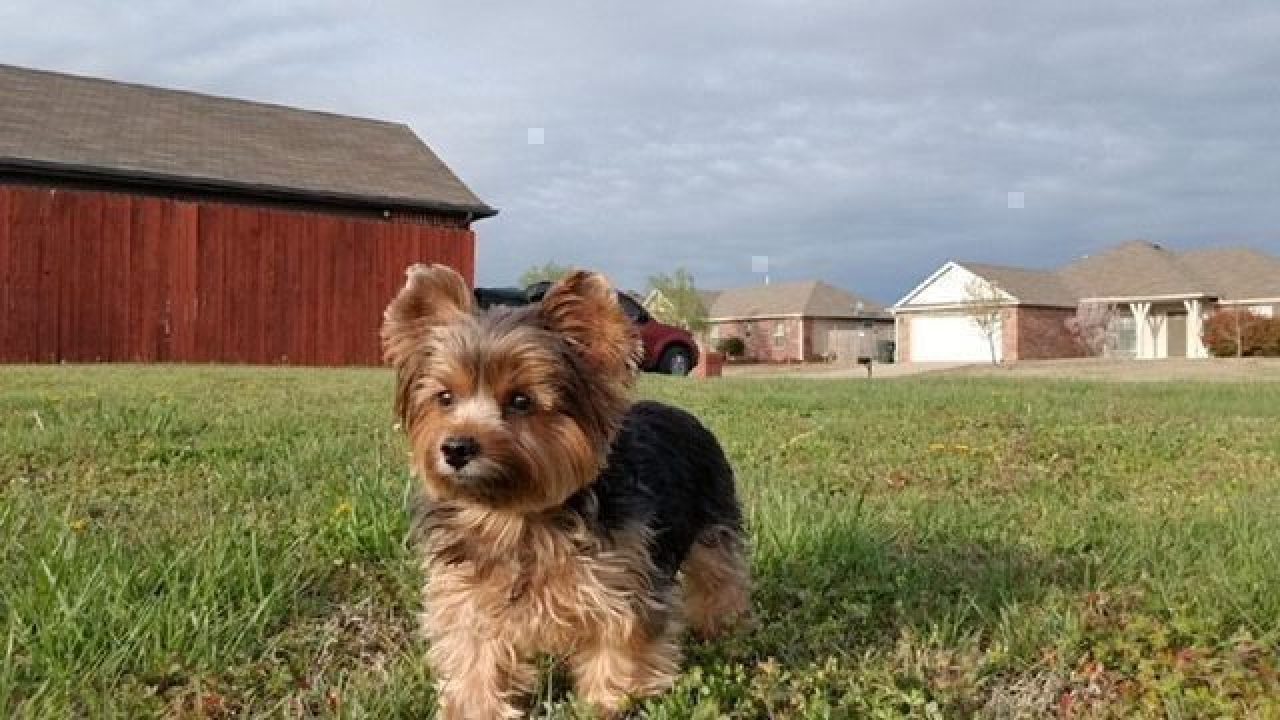 We have many common claims come through at Healthy Paws, and then we have some not-so-common ones. From stomach issues to broken bones, our Customer Care Team has seen what you’d expect, but sometimes they come across claims that are rather exceptional. One such story is of a little Yorkshire terrier named Fizzgig, “Fizzy” for short. 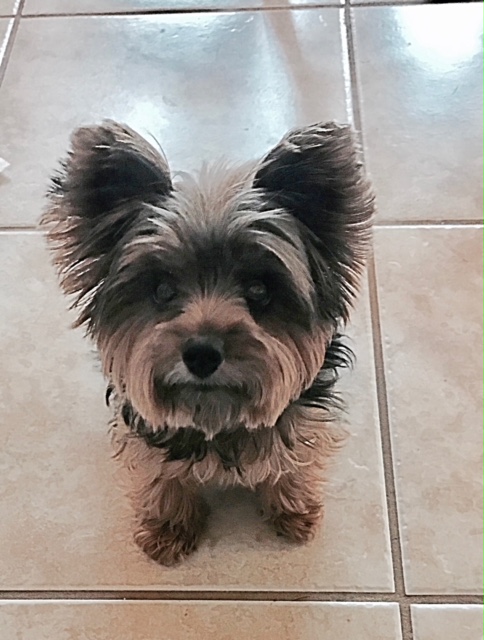 “In 2012, my husband and I were dating long distance. He lived in New Jersey, and I lived in Oklahoma,” begins pet parent Shawna. “He got lonely at home while I was back in Oklahoma, so we decided he needed a furry friend to hang out with when I wasn’t there.” They found two sisters living in Brooklyn, NY whose Yorkies unexpectedly had puppies. “We took the drive from New Jersey to Brooklyn, and that is where we met and played with three precious little Yorkies, two boys and one girl. Ultimately, we fell in love with the little girl!” At just eight weeks old and weighing in at a whopping two pounds, they brought her home and named her Fizzy, short for Fizzgig, the little friendly monster in The Dark Crystal.

“Ever since then, we have fallen a little more in love with her each day.  About six months after bringing her home, my (now) husband and Fizzy relocated from New Jersey to Oklahoma.”

“Within the first year after enrolling in pet insurance, we noticed Fizzy was having some trouble breathing,” says Shawna. “She would sometimes make a ‘honking’ sound when she got anxious, excited, or overexerted.” While some pet parents would chock it up to a reverse sneeze or allergies, Shawna brought Fizzy to the vet very concerned, and rightfully so: “Her doctor eventually diagnosed her with a collapsing trachea. We tried to treat the condition with medications for quite some time, but nothing seemed to be helping much and her condition just continued deteriorating. We could no longer take her outside for more than a few minutes, and going for walks was definitely out of the question due to the respiratory distress it caused. We couldn’t play catch with her toys or do any of the things she loved anymore because her breathing issues were just awful.”

By July 2018, Shawna had hit her breaking point. “Fizzy’s respiratory distress got so bad that we thought she was going to suffocate right before our eyes. I called her regular veterinarian and they told me to bring her in. When we got there, they tried to get x-rays of her trachea, but her anxiety level was so high that her gums turned blue, and she almost stopped breathing while they were attempting to diagnose her.” The vets determined that the situation was too dangerous to continue the examination, so they administered oxygen and advised Shawna to take Fizzy to the emergency pet hospital before scheduling a visit with specialists. 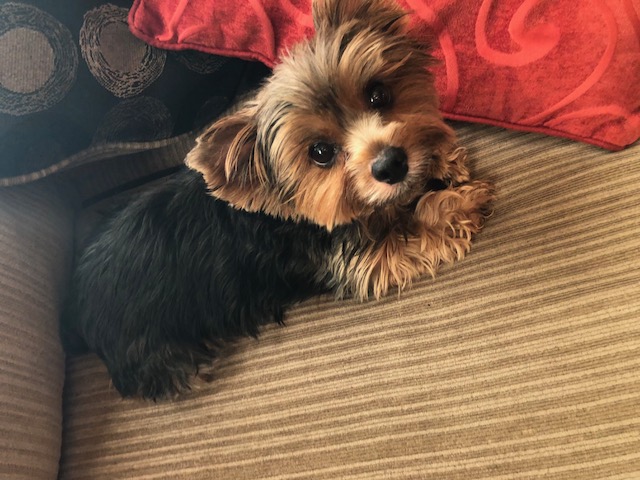 “We rushed over and by the time we got there, her anxiety level had gone down, and her breathing had somewhat improved thanks to the oxygen she had received at the vet,” says Shawna. “They were able to obtain the x-rays they needed, and they discovered that a portion of her trachea was severely and dangerously collapsed.” They stabilized Fizzy and scheduled a follow-up with a surgeon a few days later. “He advised that the only viable option for treatment was for her to have a tracheal stent inserted to open up her collapsed airway. He also went over some of the possible side effects and complications. We were heartbroken at the thought of losing our baby over this medical condition. We love this little girl with every fiber of our being!” Shawna and her husband knew they had no other choice but to go forward with the surgery.

“Fizzy underwent surgery on August 27, 2018,” says Shawna. “When the surgeon got the scope down her and could see things more clearly, he discovered that she actually had a malformation of the tracheal rings that was causing the grade IV severe tracheal collapse.”

The surgery went well, and they used a balloon to further expand and shape the stent to fit her: “Her tracheal ring was a W-shape rather than the normal upside-down C-shape (or half circle). When they do the balloon procedure to push down the center of the W and expand/mold the stent, it is impossible to get the perfect C-ring that is needed when the trachea molds to the stent. Thus, the center of the ring remains slightly raised and the troughs (or dips) on each side under the stent create conditions ripe for causing infections down the road. So, it is important to eliminate them as much as possible.”

The surgeon said he they were able to almost completely eliminate those dips on either side of Fizzy’s trachea, but there is still a small one on either side which means she needs to have continued follow-up to avoid infection. 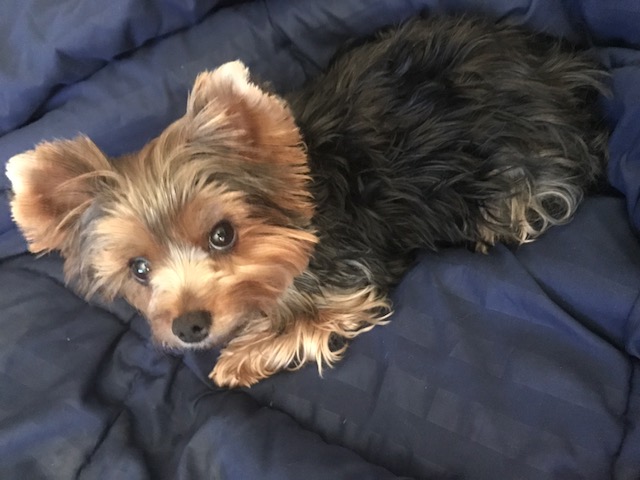 After surgery, Shawna says, “I was a basket case. I was extremely concerned about the severe coughing she was experiencing for the first 14 days.” They ended back in the ER 10 days after Fizzy’s surgery, “She had a frightening coughing and gasping episode… everything checked out okay, and after that she started improving greatly.” The family did their best to keep her anxiety level down and administered her meds (antibiotics, cough syrup, anti-anxiety medicine, and steroids) accurately every day.

“It has been a scary few weeks on the road to recovery, due to the severe coughing induced by the initial stent placement; however, things are looking up!” says Shawna. “The coughing has subsided greatly, and Fizzy can breathe again! She can play again! She can go on walks again!”

After weeks of stressing, both Shawna and her husband can now also relax. “We have felt as though we were between a rock and a hard place trying to decide if the surgery was worth the potential risks,” says Shawna. The emotional strain of bringing little Fizzy in wasn’t easy either: “I sobbed for hours when I took her in for the procedure. I was scared to death that something would go wrong, and I knew she was probably extremely frightened too!”

After their ordeal, Healthy Paws processed the surgical claim of $4,077, reimbursing Shawna $3,659 (90% reimbursement rate, $250 deductible). With the prescription medicine and ongoing checkups, Shawna says, “We have already saved over $4,000 in medical expenses. What a blessing this investment has been!”