Blog / Dog Care / Doggie Sunscreen? How to Have Fun in the Sun with Your Pet
Dog Care

Doggie Sunscreen? How to Have Fun in the Sun with Your Pet 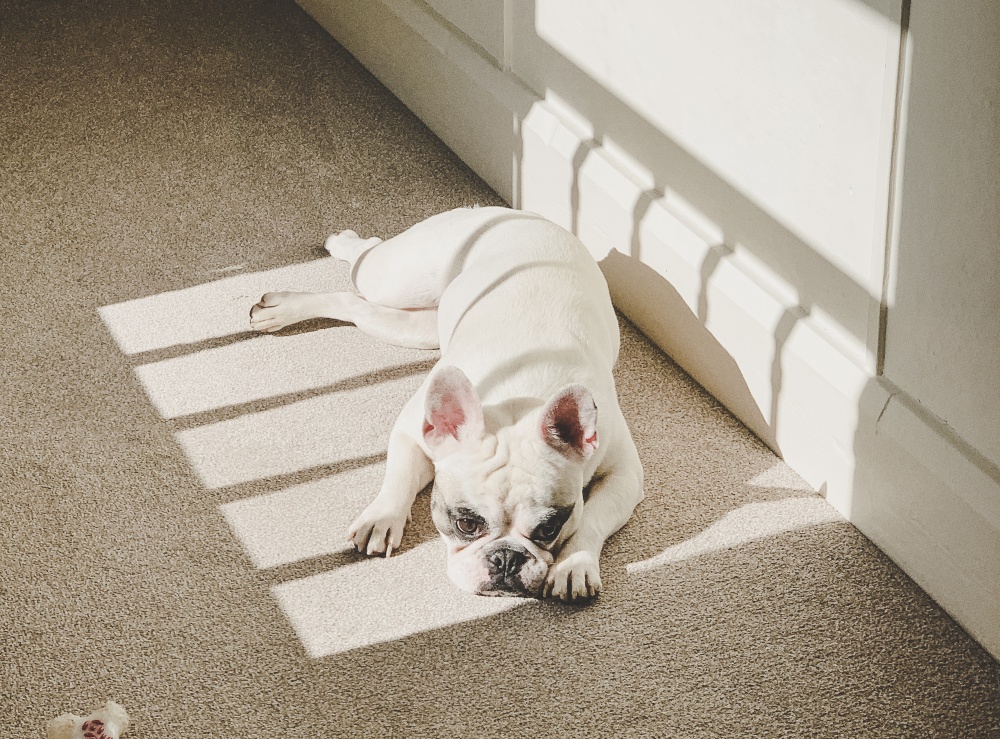 Pet parents can’t be blamed for wanting to soak up some remaining summer rays with their pets — it’s one of the joys of the season. But there are a few rules that every parent should follow for the health of pets and humans alike.

Owners of sun-loving breeds, such as pitbull terriers, need to pay close attention to their animals, says Dr. Dunbar Gram, doctor of veterinary medicine and a clinical professor of dermatology at the University of Florida College of Veterinary Medicine. These breeds tend to lay on their backs to soak up the rays, exposing their mostly hairless abdomens to the sun. Exposed body parts, such as the abdomen, ear margins, and legs, are especially susceptible to damage.

Pets who are exposed to sun can get severely burned in as few as 15 minutes, a risk that’s even greater in dry climates such as Arizona and Southern California. Gram recommends that owners dress their pets in a light-colored bonnet or a T-shirt, though even he admits that it’s difficult to do all of the time.

For the most part, pet parents should take the same precautions with their pets as they do with their own skin. Avoid sun exposure during the hours when the sun is the most intense (10 a.m. to 4 p.m., according to the CDC), and take breaks to avoid prolonged sun exposure. Collies, Shelties, Akitas and other breeds are prone to discoid lupus erythematosus (DLE), an autoimmune disease similar to Lupus in humans. Prolonged sun exposure can exacerbate the problem.

Common sense and good judgment will keep most pets healthy, but here are some tips to keep in mind:

Chances are, pets won’t like it any more than their owners, but sunscreen is a must. Cover all exposed skin, and reapply regularly. Gram recommends baby sunscreens because they’re gentler and lack zinc oxide, which is toxic to dogs if ingested.

Pet owners should also avoid heavy exercise with pets that are at risk in hot, sunny weather.

“Any breed that is not built for running, jogging or walking, including short-nosed breeds like bulldogs, can get into some acute respiratory distress,” Gram says.

The biggest threat to pet health in summer

Proper sun care is important, but Gram says the single biggest threat to pet health is leaving animals unattended in a hot vehicle. Even with the windows cracked, the temperature in a car on an 85-degree day can top 102 degrees after only 10 minutes.

During a recent trip to the grocery store, Gram noticed a dog locked in a vehicle. He attempted to find the owners in the store and ultimately had to call the police. He says they were well-meaning people who said they’d turned the A/C down to 60 degrees, but it didn’t matter. After 20 minutes in the vehicle, the dog was showing signs of distress, Gram says.

Generally, follow the same sun protection tips for pets as you do for yourself or your children.

1. Be smart: Avoid prolonged sun exposure, and seek shade when the sun’s rays are most intense (10 a.m. to 4 p.m.)
2. Don’t skimp on sunscreen: Use a pet-safe or baby sunscreen on any exposed body parts (ears, abdomen, legs, and other hairless parts) — and reapply often. Avoid sunscreens with zinc oxide, which can make pets ill.
3. Accessorize: Pet sun hats (there are many options available) and T-shirts are a good idea for increased protection. Also, use booties to protect pets’ sensitive paws from hot pavement and sand.
4. Hydrate and avoid over-exertion: Ensure pets have plenty of water, and avoid excessive exercise during the hottest part of the day. Certain breeds, such as short-nosed dogs, have a higher risk of developing respiratory problems in hot weather.
5. Don’t leave pets unattended in a car!: Don’t do it. Ever. Not even if the A/C is on, the windows are cracked or if it’s “just for a few minutes.” Temperatures inside the vehicle can quickly reach deadly levels.