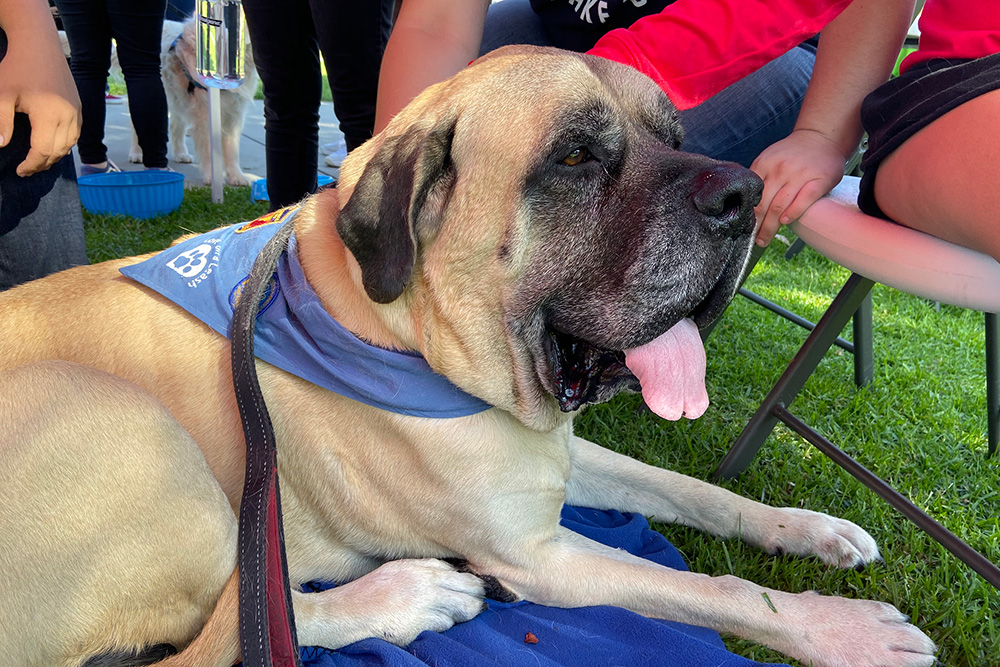 Bosley is an eight-year-old, 160-pound English Mastiff love bug. He’s so social that pet parent Melissa has trained him as a therapy dog with the nonprofit “Love on a Leash”, visiting hospitals, schools, and a Wounded Warrior battalion in Encinitas, Calif.

One day Bosley started vomiting and Melissa noticed he was panting and shivering and had trouble standing. She rushed him to the vet where he was diagnosed with bleeding in the gastrointestinal tract. He also had sucked liquid into his lungs, which lead to pneumonia.

He was in such bad shape that the hospital told her he was the most critical patient at the time. Bosley would be hospitalized for about a week.

“I was not ready to lose him. He’s my baby,” Melissa said. Melissa was worried about the vet bill, but while she was at the hospital, she was reassured by a Healthy Paws customer care agent that the hospitalization would be eligible for coverage at 80 percent of her reimbursement level.

“You have no idea what a relief that was for us at such a stressful time,” she said. “The hospitalization cost over $30,000, which we could not afford. Who can? Without Healthy Paws we would have lost him,” Melissa said.

Melissa said vet care is especially expensive with a large dog, for example, he required multiple blood transfusions and a large dose of antibiotics.

After a tough week in the hospital, Bosley was ready to come home but his recovery continued for quite some time. Bosley suffers from arthritis, and the vets thought the bleeding was caused by long term anti-inflammatory medications. Since he can no longer take those meds, his arthritis is worse, which Melissa is trying to alleviate with other treatments, including different pain medication, physical therapy, swimming, electro-acupuncture, chiropractic treatments and shots to treat joint pain.

“He is more limited and less mobile but he’s back to being Bosley now, and doing well,” she wrote.

And he’s bringing joy to people again by working as a therapy dog.