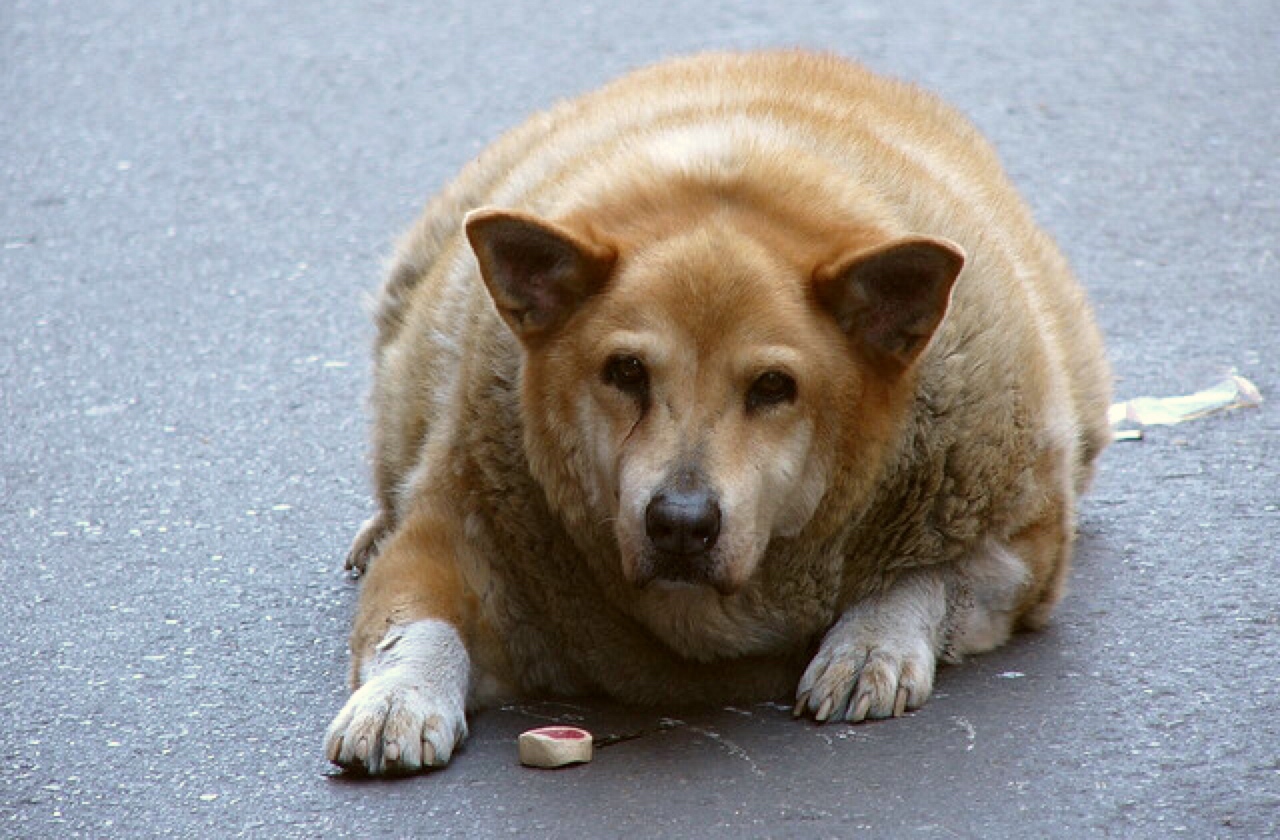 The internet is full of memes and jokes about fat dogs and cats, but pet obesity is no laughing matter. According to the Association for Pet Obesity Prevention, 52.7 percent of U.S. dogs are obese or overweight – that’s the majority of American dogs! This epidemic of fat dogs mirrors the overall trend towards obesity, as 69 percent of adult Americans are overweight or obese.

With all these statistics, it’s time to put your pet’s weight in perspective. Fat dogs are at risk for a number of health complications, many of which have already influenced their weight. If you suspect your pet’s weight gain may be caused by an underlying health condition, see your vet.

With all those extra pounds, pets’ joints have to work extra hard. Osteoarthritis in dogs is a common health condition, developing in about 20 percent of dogs, but it’s more likely to occur in obese pets. Fat dogs have immense pressure on their joints; over time this leads to joint degeneration. More fat also means less muscle, which causes painful joint inflammation.

An obese, arthritic pet may be stuck in a cycle of weight gain – arthritis makes movement painful, while a sedentary lifestyle only worsens both arthritis and pet obesity. Begin your dog’s weight loss program by gradually reducing portion sizes and introducing short, easy walks into your routine. Swimming with your dog is another exercise option, and water’s buoyancy reduces stress on inflamed joints.

Overweight pets don’t live as long as their fit counterparts. According to VCA Hospitals, “A large, lifetime study of Labrador retrievers has found that being even moderately overweight can reduce canine life expectancy by nearly two years.” Other research has found pet obesity decreases life expectancy by six to twelve months.

Obesity-related diseases like diabetes, arthritis, cancer, heart disease, bladder infections, and even heat stroke can also reduce fat dogs’ lifespan. Sudden weight gain may be a sign your pet’s obesity is related to a medical condition; always see your vet if you notice any unusual changes in your dog’s appearance or behavior.

Most pet obesity is related to the animal’s lifestyle – its feeding and exercise habits. While some dogs may develop obesity as a side effect of certain health conditions, the majority of cases are attributable to pet parents’ behaviors. Your dog doesn’t know how much is should eat – pups are notorious for eating anything you put in front of them. Following the same logic, most dogs will gladly lay around all day, but are more than happy to go for a long walk when prompted.

“Free feeding” – simply leaving food in your pup’s bowl for leisurely eating – is most often the culprit behind fat dogs. Using this feeding strategy, there’s no way to tell how much your pet is eating. Instead, put fat dogs on a meal schedule, filling food bowls at the same time every day and removing them after 20 minutes.

To increase your pet’s exercise, start gradually and incorporate into your daily routine. An easy way to begin is by taking short walks instead of just “letting the dog out” for potty breaks. While you’re outside, toss a tennis ball, disc or stick for Fido to chase. Swimming is a great form of exercise for older pets or those with joint conditions like hip dysplasia and arthritis.

Don’t think that an obese pet is doomed to its fate – many dogs have lost weight with the help of meal management and daily exercise. Ask your vet for weight loss tips, exercise needs, and meal schedules specific to your dog’s breed and lifestyle.

Kale Chips the Beagle is just one success story; the 85-pound canine could barely walk when he arrived at One Tail at a Time. The shelter – which recently received a Healthy Paws Foundation grant – helped Kale Chips lose over 20 pounds since his arrival in January 2015. His happy tail continues! Kale Chips is available for adoption at the Chicago-based One Tail at a Time, and his adoption fee is already covered.