Fido Is So Passé; Pet Parents Turn to Pop Culture For Creative Names 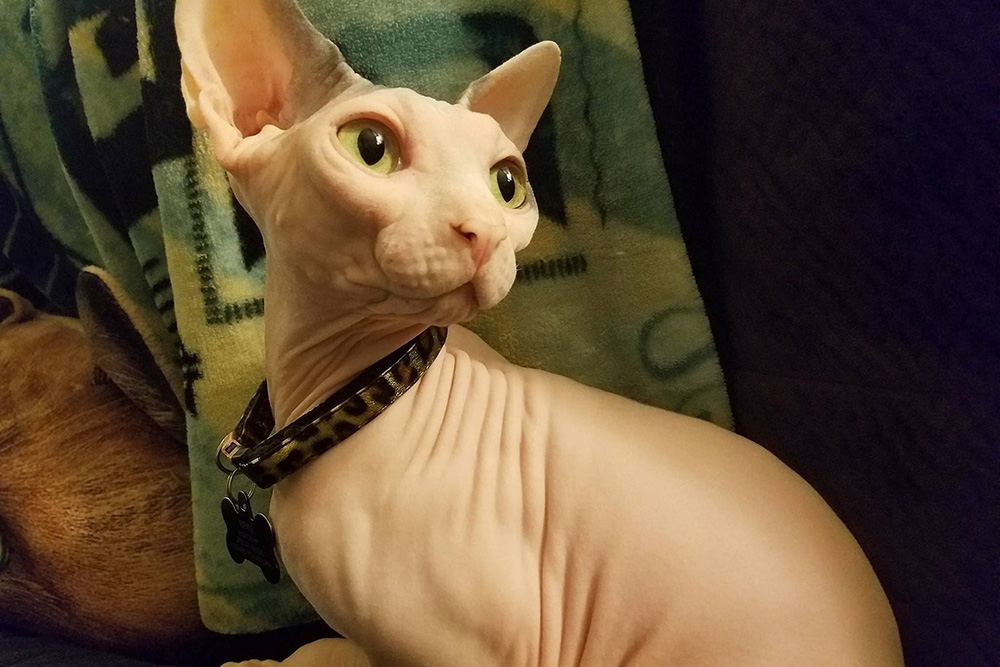 Forget Charlie, Cooper, Luna, and Oliver – the most popular pet names of 2019, according to Healthy Paws data. Some pet parents look to comic books, movies, games, sports, or exotic foods to come up with wacky, fun or thought-provoking dog and cat names that reflect their pet’s unique personalities. Here are a few we learned about:

Bathound, Rogue, and Rocket: A family of superhero dogs

Pet parent A of Yakima, Wash. named all three of her mixed breed dogs after comic book characters. Bathound was named after Batdog, one of Batman’s canine companions. The real Bathound, a mixed-breed dog she adopted from a Colorado shelter, looks remarkably similar to the cartoon version. The Joker is safe from Bathound, but squirrels are not, A said.

“Bat’s favorite thing in the world is squirrels. He is a very stealthy hunter and can sit still for hours on end, waiting for the right time. We have to warn the squirrels when we let them outside because not only is he patient enough to catch them, he is fast enough,” she wrote.

A later adopted a mixed-breed puppy from a terrible hoarding situation.

She named her Rogue after the character in X-men. The name, along with a loving home, must have worked because the previously anxious dog now fears nothing and loves to go down slides at the park.

Finally, A adopted a border collie mix that she named Rocket because he looked like the feisty raccoon in Guardians of the Galaxy and has the snarky personality to match.

Naming previously abused dogs after superheroes has worked great for A, as all three dogs have blossomed.

“My goal is to have dogs that can handle anything in life. They love new situations and love obstacles and practicing how to overcome fears and new environments. All of them came from very bad situations and learned how to trust and overcome those fears by embracing each new thing we tried to build their confidence,” she wrote.

Tom Hanks: Just as lovable as the actor 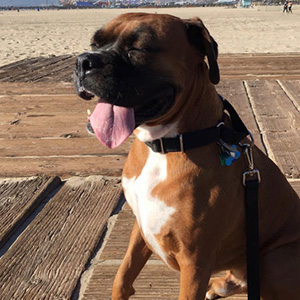 Sara and her husband adopted a boxer from Boxer Rescue LA in 2016 when he was about two years old. He was so lovable that they thought Tom Hanks would be the perfect name because “who doesn’t like Tom Hanks?! (Yes, we’re big fans, like every other human on earth),” she wrote.

Turns out the name is pretty appropriate for this gentle and laid-back social butterfly who adores attention. “He absolutely loves being around people, the more, the better, and especially has a sweet spot for babies and kids,” Sara said.

Sara and her husband often take Tom Hanks to bars in their Chicago neighborhood, where he’s friends with all the regulars.

“His other favorite pastimes are farting, sitting upright like a human, snoring, chasing toys (but not returning them), and just being an all-around goofball. People love meeting someone ‘so famous,’ and his name also seems to help to put them at ease,” Sara said.

Phyrexian Obliterator: Your cat’s name is what?

When you have a hairless sphynx cat with her own social media presence and are fans of the card game “Magic,” the name Fluffy just won’t do. 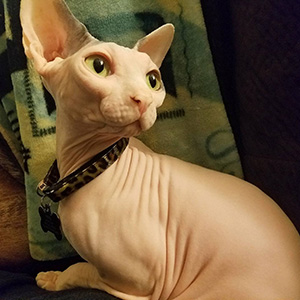 That’s why pet parent Scott and his wife named their quirky cat Phyrexian (pronounced fy-rex-ee-an) Obliterator or “Rexie” after a horror creature featured on one of the game’s cards.

Unlike her vicious namesake, Rexie is a total ham who loves getting attention showered on her.

Rexie has to visit the vet often for a disorder that requires her to be on a special diet.

“Her name never fails to get a double-take from whoever is checking her in. You can see them come out to call the name, look down at the chart, and freeze for a moment. But people on various Facebook groups love it for being so different,” Scott said.

eBay: This cat is not for sale 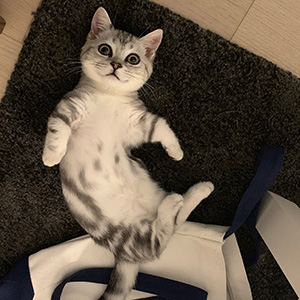 Vic named his cat eBay, but the reason has nothing to do with the online tech giant. Vic and his wife lived in China, where they adopted a Corgi dog, which they called Nighty Night – or 99 as a nickname. Then he took in a cute cat, which they called 100 in Chinese.

When the couple moved from China to New York, they needed an English name for 100. The pronunciation of eBay sounds very similar to 100 in Chinese, so the name stuck. 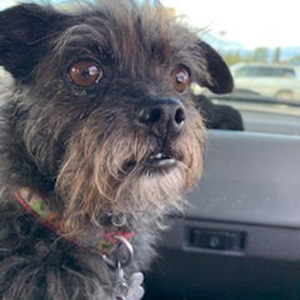 When a 6-year-old hairy little mutt made his way from California to Anchorage, Alaska, to be taken in by pet parent Paul, he was simply called Georgie.

That name was not grandiose enough for Paul, who thought the previously homeless dog needed a name to differentiate him and better exemplify his fighting spirit. He changed Georgie to Georges and added Stink Pickle for the sheer silliness and alliterative value.

“He IS a real standout. No adventure intimidates Georges Stink Pickle. He’s an active outdoor enthusiast,” Paul said. Paul often rides his bike around with Georges in a backpack.

Luke Skybarker: The force is with them 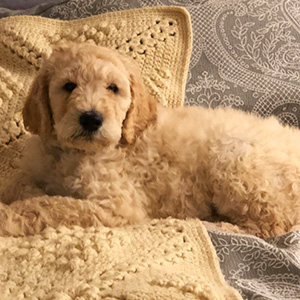 Jason and his family adopted a blonde standard poodle puppy a couple of weeks ago as a distraction from the COVID-19 virus ordeal.

He and his two sons are huge Star Wars fans and wanted to name him after a character. They chose Luke Skybarker because “he too is blonde and fearless like our boy,” he said.

The timing of their adoption also had something to do with it.

“Luke Skywalker first appears in Star Wars Episode 4 ‘A New Hope’.  We feel like if there is something all of us are in desperate need of right now, it’s a ‘new hope.’ Here comes Luke Skybarker to save the day!” Jason wrote.

Sometimes pets get named by committee. That’s what happened when pet parent Meri adopted a 3-year-old cat from a rescue about a month ago. He came with the name Prince Eric, which she didn’t think was a good fit with his personality. Meri turned to her love of baseball, the Dodger’s specifically, and thought of the legendary broadcaster Vin Scully. 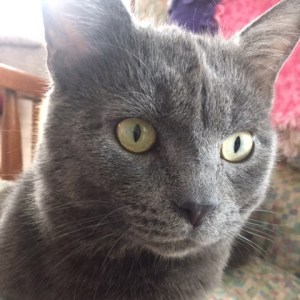 She then asked for suggestions from friends and family, and someone suggested Shadow, among other names.

“I even tried to get the cat’s help, ridiculous as that might sound. I wrote the names on separate pieces of paper, put the papers on the floor, and then hoped he would land on one, but he was no help,” Meri said.

She couldn’t choose one, so she put her two favorites together to get Scully’s Shadow. True to his name, Shadow follows Meri everywhere.

It seems especially appropriate that Meri solicited ideas from her community. If not for them, she wouldn’t have been able to adopt Scully. After meeting him, Meri checked with her apartment manager and found out pet fees were too high for her to afford. But after she posted the photo of the kitty on Facebook, her friends started sending her money to cover the apartment fees.

“It was unreal, unexpected, and humbling. Because of their generosity, I felt like they could and should have a voice in his new name as well,” she wrote.

Harry Huckleberry: A meeting of movies and literature

Pet parent Karin named her Jack Russell terrier Harry in honor of the classic romantic comedy “When Harry Met Sally.” She also wanted to add Huckleberry, because she already had a dog named Finnegan, who goes by Fin. She thought it would be cute to have Huck & Fin, in a nod to the classic Mark Twain story “The Adventures of Huckleberry Finn.”

In yet another movie reference, when Harry is naughty, the family calls him Dirty Harry.

Pet parent Seanna lives in Texas, so she wanted southern sounding names for her adopted Sheepadoodle (English Sheepdog and Poodle) and Schnoodle (Schnauzer and Poodle).

When she adopted Paisley, the Schnoodle, she wanted her to have a middle name like a southern lady. Jane was a middle name passed down in her family, so she went with Paisley Jane.

When it came time to adopt the 9-month old Sheepadoodle, she came from the breeder with the name Shiloh Rayne. Seanna’s daughter wanted something a little different, so she suggested Shilah.

The result is two names that both rhyme and are complementary.

“And Shilah Rayne and Paisley Jane just sound super cute together,” Seanna said. “Both their names are interchangeable, and the babies answer to both.”