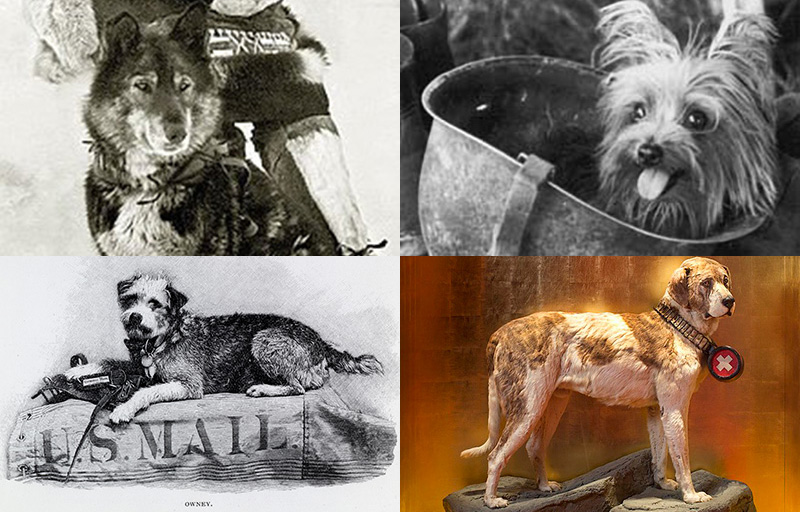 Dogs have been part of human history for at least 15,000 years, since the domestic dog split from its wolf ancestors and started living close to people, who provided some protection in exchange for help with hunting.

As the relationship between dogs and people became more intertwined, and the dogs became actual companions rather than just useful livestock, canines have proven to be exceptional partners in furthering human achievement and well-being.

Sometimes those efforts defy expectations and rise to the level of being heroic. And sometimes they change history.

For Memorial Day, here are a few dogs who have changed human history, all for the better.

Balto and Togo – the dogs who inspired the Iditarod

Today, the Iditarod, aka “The Last Great Race,” is a sporting event where the best mushers and dog teams in the world race more than 1,000 miles from Anchorage to Nome, Alaska in harsh conditions, in pursuit of glory and a small cash prize.

The Iditarod race was inspired by a real incident in 1925 when there was an outbreak of diphtheria, a deadly bacterial infection, in Nome. Doctors needed to transport an antitoxin serum 600 miles to Nome quickly to save lives, and dog sled was the fastest form of transportation available past the village of Nenana, where the railway came to an end. A relay of more than 20 mushers took part, facing bitterly cold blizzard conditions during the journey.

Balto, a Siberian Husky, was the lead dog on a team driven by Norwegian musher Gunnar Kaasen into Nome. Balto managed to stay on the trail in near whiteout conditions and prevented his team from going into a river.  While Balto initially received the most attention, it was Togo—another Husky—who, at 12 years old, led his team on the longest and most hazardous stretch of the run, covering nearly 300 miles. The mission was successful, and both dogs went on to fame and long lives in retirement.

Think of the St. Bernard breed, and you probably imagine a handsome, noble, slobbery giant of a dog, perhaps with a small barrel attached to his collar.  That image is likely due to Barry der Menschenretter (Barry the People Rescuer), a dog who worked as a mountain rescue dog in Switzerland and Italy for the Great St. Bernard Hospice in the early 1800s.

He reportedly saved more than 40 lives. Barry’s most famous rescue was of a young boy he found asleep in a cavern of ice. After warming up the boy’s body sufficiently by licking him, he moved the boy about and onto his back and carried the child back to the hospice. While Barry was known as an Alpine Mastiff, and was smaller than the modern St. Bernard, the modern breed was later named after the region where he had lived.

Sadly, Old Drum the foxhound only became famous because of the manner of his death. But it was his owner’s love for him that led to a moving legal argument for the hound where the words “man’s best friend” were first used.

In 1869 Missouri, Old Drum was Charles Burden’s hunting dog. Drum wandered onto a neighboring property owned by a sheep farmer, who shot him. Burden sued the farmer, who was also his brother-in-law, for damages of $150, the equivalent of about $3,000 today. The closing arguments by attorney George Vest were more of a eulogy to the dog than an argument about the facts.

“The one absolutely unselfish friend that a man can have in this selfish world, the one that never deserts him and the one that never proves ungrateful or treacherous is his dog,” Vest said in a closing argument that resonates today. Vest won the case, as well as an appeal to the Missouri Supreme Court. A bust of Old Drum resides in the Missouri Supreme Court building.

Sergeant Stubby was a mixed-breed Bull Terrier assigned to the 26th Infantry Division of the U.S. Army during World War I. He served for 18 months and participated in 17 battles on the Western Front in France. He was reported to have saved his regiment from surprise mustard gas attacks, found and comforted the wounded, and allegedly caught a German soldier by the seat of his pants, holding him until American soldiers found him.

Stubby has been called the most decorated war dog of WWI, and is the only dog to be nominated for rank and then promoted to sergeant through combat. After the war, he appeared in parades, met three presidents, and was awarded a medal by General Pershing himself, making him the most famous animal in the U.S. for nearly a decade after the war until he died in 1926.

Stubby’s remains are displayed in the Smithsonian Institution’s National Museum of American History. Stubby was also the subject of a 2018 animated film.

Buddy, the first seeing-eye dog in the U.S.

As a teenager in the 1920s, Morris Frank became blind in one eye and then the other in two separate accidents. Despite his disability, he attended Vanderbilt University while working as an insurance salesman. He hired young men to serve as guides but found them to be unreliable. Morris heard about a dog trainer in Germany who was training dogs for use as guides by blinded World War I veterans. The trainer invited him to come to her dog training school to be paired with a guide dog.

Frank jumped at the chance, and at the school he was partnered with a female German Shepherd named Kiss, whom he promptly renamed Buddy. After their initial training together, Frank and Buddy returned to his home in New York City, and Frank began telling reporters about how he could now travel independently with his guide dog. In a widely documented incident, Frank demonstrated Buddy’s abilities by crossing West Street, a particularly dangerous waterfront street, during the evening rush.

The pair worked together for 10 years, with Frank becoming an outspoken advocate for blind or visually impaired people and creating the first guide-dog training school in the U.S., The Seeing Eye. Frank named all of his subsequent guide dogs Buddy.

Owney, a well-traveled dog who delivered

Owney was a terrier mix who belonged to a postal clerk at the Albany, N.Y. post office and would often accompany him to work. The little dog seemed to love the smell of the mail bags and would sleep on them and go with them when they were moved. When the clerk quit the postal service in 1888, Owney stayed to become the Albany office’s unofficial mascot.

Soon he was joining delivery men on the Railway Mail Service and ultimately traveled all across the U.S. and 140,000 miles around the world over nine years. He was a welcome addition in post offices, as he faithfully guarded the mail and would not allow anyone other than mail clerks to touch the bags. The postal clerks at Albany wanted to be sure that Owney would return to them, so they bought him a dog collar with a metal tag that read: “Owney, Post Office, Albany, New York.” To this collar, the various railway offices added their own tags. Owney’s preserved body is on display at the National Postal Museum and a postage stamp was designed for him in 2011.

Today, it’s widely accepted that dogs can provide valuable emotional support to people who have suffered physical, emotional or psychological trauma, but that was not the case in the middle of the last century. Enter a tiny, four-pound Yorkshire Terrier named Smoky, who was discovered in a foxhole by American soldiers serving in New Guinea during World War II.

Smoky was adopted by Corporal Bill Wynne, who took her with him everywhere in a backpack, including during combat flights and sea rescue missions. She lived with Wynne in a tent in the jungle. She survived 150 air raids on New Guinea and made it through a typhoon. Smoky even helped build an airbase by running a telegraph wire through a 70-foot-long pipe that was only eight inches in diameter, saving the soldiers days of work.

But it was Smoky’s remarkable tricks that led to her becoming the world’s first therapy dog. Her skills included walking a tightrope while blindfolded. She entertained troops in hospitals overseas and upon returning to the U.S., she was featured on numerous TV programs and continued to work as a therapy dog in veterans’ hospitals.

If you are fascinated with the history of heroic dogs, you may be a candidate for pet insurance for your own little hero. Find out more about dog insurance (and cat insurance) and start by getting a free quote.