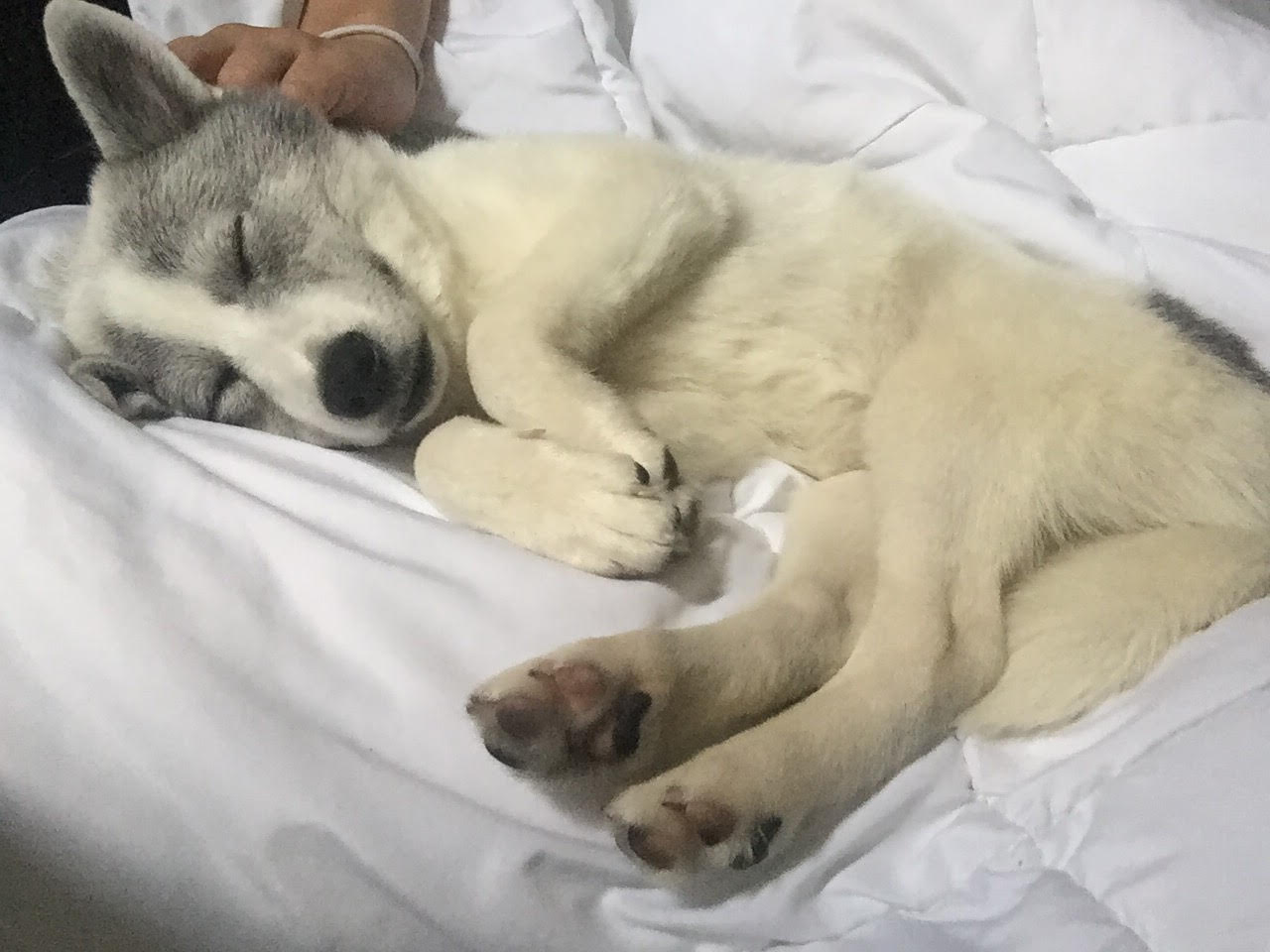 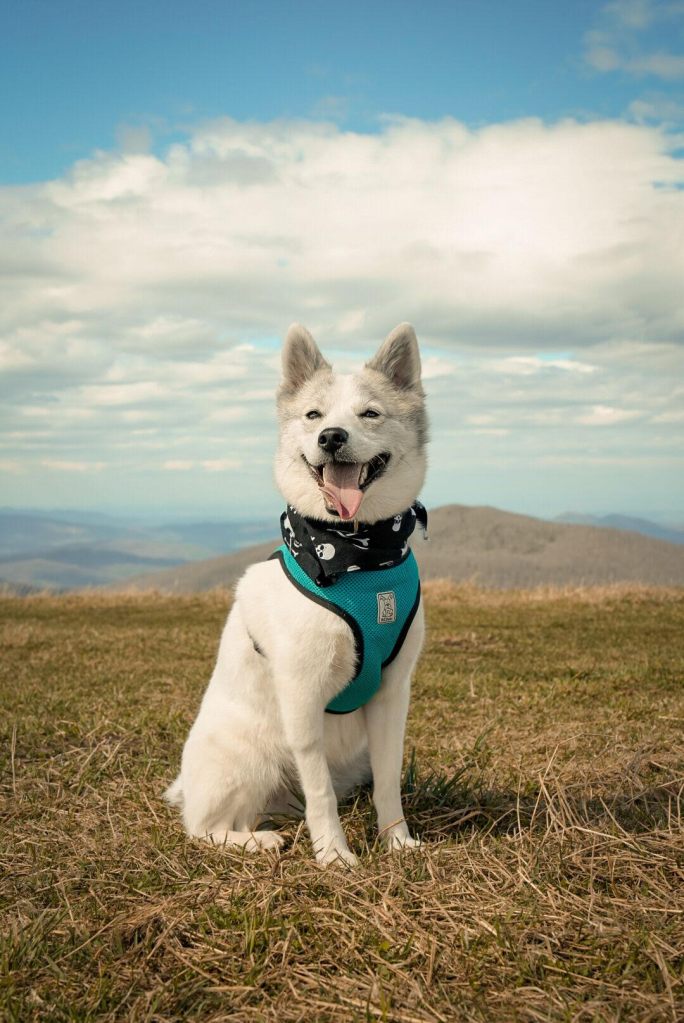 “I named him Bowie because he was born six days after the late icon’s death, but it definitely fits his rock star personality!” says pet parent Karisa. “He is the center of attention wherever we go and he is abnormally chill. He loves belly rubs and LOVES to snuggle. Bowie won’t go anywhere without his stuffed dragon and he is the biggest momma’s boy, always right at my feet to the point where I’m constantly tripping over him.”

Karisa adopted Bowie from a family in Jacksonville, Florida in 2017 when he was just four months old, before bringing him up to New York City. “It just so happened that the day they shipped him to me in New York fell on Mother’s Day, so I knew right away that he was going to be my spoiled little furry son.”

When Bowie was only a little over a year old, Karisa discovered he’d injured himself over Easter weekend: “We had no idea how serious the injury was. We let him out late at night to go to the bathroom, and we think his paw got wedged between [some] rocks because he went to run and face planted into the gravel. We noticed he was limping a bit on his hind left leg, but we thought maybe he just bruised it. He never once cried or showed any signs of discomfort other than a limp.” 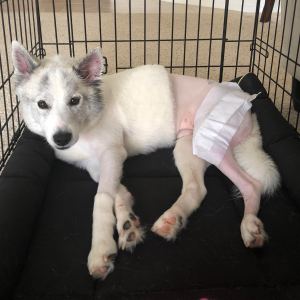 Karisa crated him the next day and then discovered severe bruising between his leg and belly. “We decided to bring him into the hospital, thinking this time that maybe he dislocated something. I can’t even explain the feeling I felt in the pit of my stomach when the doctor brought out his X-Ray and reveled that Bowie’s femur was snapped completely in half!”

Unfortunately, due to the holiday weekend, their only option at that moment was to have the vet insert a pin to stabilize the bone, knowing that there was a chance the healing process may have complications because the break was so clean, before casting his leg. “I asked the doctor if Bowie’s [prior] patella luxation (a dislocated kneecap) had anything to do with the injury, and he said no, it was just a freak accident.”

Fractures are very common in dogs and puppies, especially when they’re active and athletic, or simply downright curious. There are different types of fractures, depending on how the bone is broken, and this includes closed (cracked bone, skin isn’t broken), greenstick (cracked bone but not completely fractured), compound (bone is visible through skin with bleeding), and epiphyseal (a crack in the growth plate of a bone). Treatments vary, but just like humans, you’ll likely see a pup in a cast, and surgery may or may not be necessary. A prescription for pain medication is typically standard as well. One thing vets advise to pet parents: never assume a fracture will heal on its own, and always see a doctor if you suspect your pup has fractured a bone. 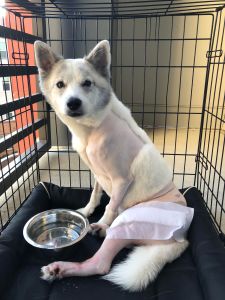 Bowie’s treatment plan began normally, however the situation escalated over the next few months. While he seemed to be doing a lot better after three weeks in his cast, when the doctor removed Bowie’s cast during his check-up, x-rays revealed that the pin had snapped and that his leg was broken again. “Because of the severe risk of infection and blood flow, the vet said our best bet was to amputate his leg, but we wanted to explore other options. After seeking opinions from several other surgeons, we finally found an orthopedic surgeon who agreed to try and salvage the bone fragments by installing a metal plate and screws to secure his femur.”

Almost one month later, Bowie went for his second surgery. The surgeon had to take a bone graft out of Bowie’s left shoulder in order to install the new hardware. “In a matter of days, Bowie was up and walking around almost perfectly, but then started limping again and losing his balance after a few weeks,” explains Karisa. After new x-rays were taken, they discovered that the plate had bent and was jamming into his knee cap, fraying his tendons and ligaments. “Luckily, his bone had started to callous, so the doctor felt comfortable removing the plate and reinserting a new pin!”

Brave pup Bowie went in for his third surgery the next month, “and we thought the third 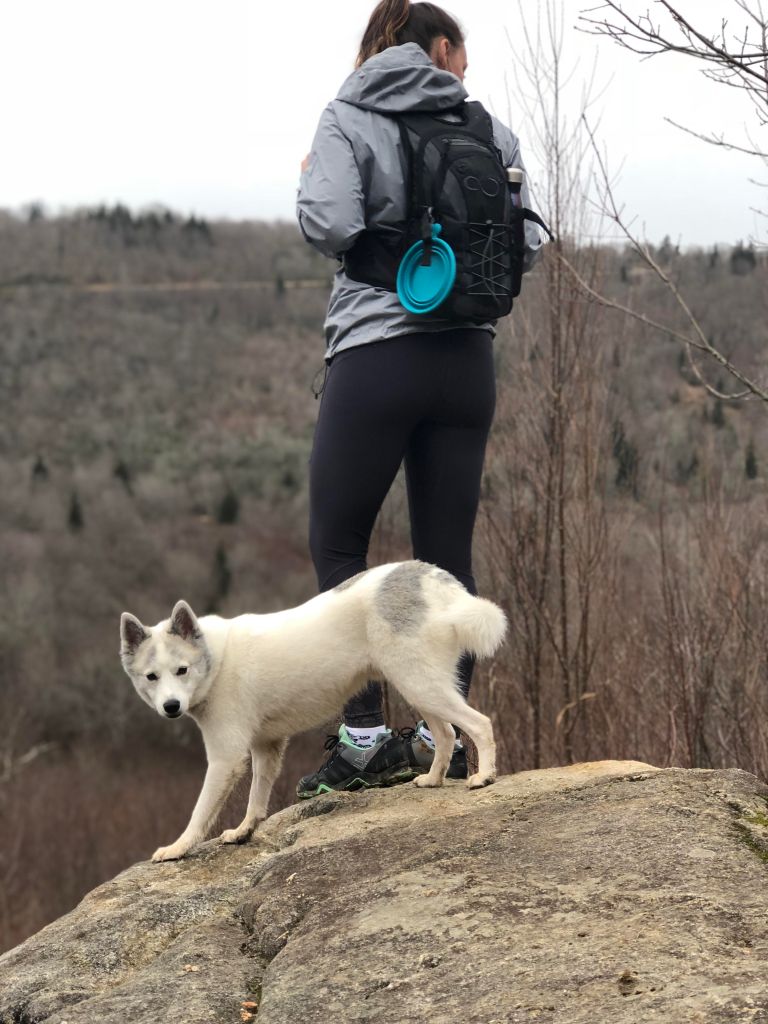 time would be a charm!” After a few days, Bowie was back to his normal self, walking around, wagging his tail, “and antsy to get out of puppy jail. But, we were wrong. A few weeks after surgery, Bowie stopped putting his leg down and was back to hopping around on three legs.” A post-op check-up showed that the pin had shifted and that it may be pinching his sciatic nerve, causing him extreme discomfort. So, Bowie went under the knife for a fourth time to remove the pin altogether.

“Being a pet parent during this saga has been emotionally and physically exhausting,” says Karisa. “As if having a fur baby didn’t come with enough expenses and responsibilities, I now have to worry about carrying him everywhere, monitoring his walking habits, sticking to a strict medication schedule, icing and massaging his leg three times a day and constantly running him to vet and rehab appointments. Bowie is worth every second of it, but not having to worry about the cost of his care makes it so much easier to just focus on getting him back on his feet.”

With her Healthy Paws Pet Insurance, Karisa didn’t have to worry about the expense. “I never wanted to be in a position where I would have to put my finances ahead of Bowie’s well-being, so I explored what my options were and discovered Healthy Paws. I never thought I would need it, but I am so unbelievably thankful that I have it—and so is Bowie!”

Karisa has so far saved $6,449 in vet bills and Bowie is healing and getting back to his regular self: “After weeks of not walking on his leg, Bowie now has to go to physical therapy several times a week to rebuild his muscle mass and his confidence. He isn’t quite back on all fours just yet, but we’re starting to see progress after each rehab treatment.” 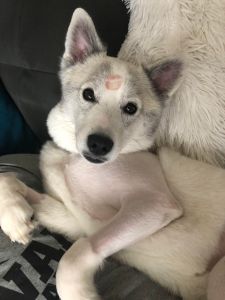 No matter how much you try to protect your pet, there’s always a chance they can get injured a few times in their life. Knowing and recognizing the symptoms of common injuries and illnesses is the best thing a prepared pet parent can do for their pet, as well as signing up for pet health insurance. Vet bills can be covered up to 90%, which means you can say “yes” to otherwise expensive treatments. Start by getting a free quote.