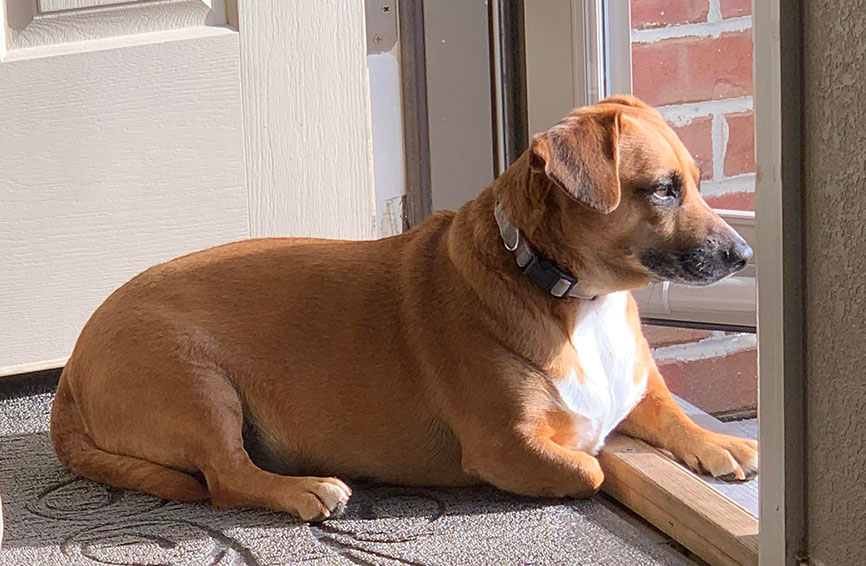 Gabby is a 4-year-old Chiweenie (chihuahua-dachshund mix) who was rescued by pet parent Jacqueline three years ago after she had given birth to a litter of puppies. Only one of her puppies had survived, and Jacqueline also took her in and named her Faith — she is also covered by Healthy Paws.

Gabby retained her maternal instincts toward puppies and even baby bunnies, Jacqueline said.

“She is small but mighty and a protector of our family (pack),” Jacqueline said. “She likes other dogs but doesn’t like if they scare or chase Faith.  Gabby also likes to join when neighborhood coyotes or dogs howl – she has the cutest little howl.”

Gabby is extremely loyal and follows her pet parents from room to room, just to be close.  She loves to play outdoors and go for walks.

Back injury diagnosed as ruptured disc

One day Gabby injured her back. Over the next few days, it got progressively worse, to the point where she could not move her tail or empty her bladder or bowels.

Her vet diagnosed a bulging disc and indicated it was most likely ruptured and advised getting her to an emergency animal hospital right away.

At the emergency vet, they performed an MRI and confirmed the disc was ruptured and was pressing on her nerves. Surgery was the only possibility for Gabby to recover. The surgeon indicated this type of surgery had a 50 percent success rate but her three most recent procedures had gone very well.

Jacqueline was asked to pre-pay the cost of the surgery, estimated at over $7,000. Jacqueline dipped into her savings and used credit cards to cover the upfront cost. She was in the process of closing the sale on a new home and she worried that the spending would impact the purchase if the lender needed to re-verify her funds, but Gabby’s health was paramount.

“We, of course, didn’t hesitate and paid the bill immediately,” Jacqueline said.

The surgery was performed and Gabby then spent three days recovering in an intensive care unit. The first two days she couldn’t control her bladder or move her tail.  But once the staff removed the catheter and started her on medication to relax and empty her bladder, she started to show progress.

By the third day she was doing so well and was able to move her legs, so she was released to go home.

“Within days she was able to empty her bladder and bowels and was walking.  At the follow-up visit later that week the surgeon was shocked at how quickly she had improved and suggested we start physical therapy,” Jacqueline said.

At physical therapy, she continued to shine, only showing a slight weakness in one leg. She was so strong that the therapists recommended only one or two more sessions.

“The PT told me she was working with another dog who had the same surgery before my pup and he still wasn’t able to use his back legs.  We felt so fortunate,” Jacqueline said.

Since then, Gabby has made a complete recovery and is back to her walks and playing outside.

Fortunately, Jacqueline’s finances also worked out. She filed the claim and received a reimbursement check for a little over $5,000.  It arrived in time to help pay for the move to their new home, which has a nice backyard for Gabby and Faith.

Jacqueline heard about pet insurance from her veterinarian. She saw several recommendations for Healthy Paws on the rescue site where she had adopted Gabby and decided to enroll.