Getting Fat Dogs Slim: How to Help Your Pet Lose Weight

When a veterinary specialist told Nicole Stewart that her Pomeranian, Ellie, was fat, she was shocked. The thirtysomething Pilates instructor couldn’t imagine a world in which she owned an overweight dog. Stewart is, after all, a tiny thing who dabbles in veganism and makes a living whipping people into shape. She prides herself on her fitness, and she hadn’t guessed that her dog was anything more than a bit plump and a lot furry.

“The specialist said, ‘I know this is probably going to be hard to hear, but Ellie is obese,’ ” Stewart says. At 14.5 pounds, the pup weighed 4.5 pounds—or 45 percent—more than she should. Ellie’s BMI was sky high.

According to the Association for Pet Obesity Prevention, Ellie was not alone. The organization’s research shows that an estimated 52.6 percent of dogs in the United States are overweight or obese. That’s a lot of chunky puppies.

Ellie had gotten fat the same way we humans do — too many treats, too little exercise. “I had basically been lazy about walking her,” Stewart says.

According to veterinarians at VCA Animal Hospitals, “as few as 5 pounds above the ideal body weight can put your dog at risk for developing some serious medical conditions,” such as heart disease, high blood pressure, arthritis, and more.

Just as the human world is rife with get-thin-quick schemes, so goes the pet world. A San Francisco company makes what is essentially a Fitbit for the canine set. There are pricey doggie treadmills, canine balance balls, and a DVD called “Pilates for Pooches.” (Stewart probably wishes she’d thought of that!). But, as with people, the best way to get a dog in shape is more movement and smaller meals. 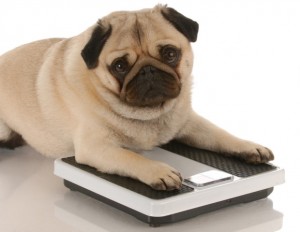 In other words, there are no shortcuts to a leaner, tighter Affenpinscher.

If you find yourself with an overweight pooch, first have your dog checked out by your veterinarian to be sure that he doesn’t have an underlying health condition, such as low thyroid function. If all is well, your veterinarian will most likely suggest an exercise and diet program.

“The first thing you can do to help your dog lose weight is to increase the intensity and length of your daily walk,” say VCA vets.

If you typically take your dog out for 10 minutes in the morning and 10 minutes in the evening, start by adding just five minutes to each of those walks. It may not seem like a lot, but that increases his exercise by 50 percent. Work your way up to 20 minutes or a half-hour at a time. And if it’s your tendency to stroll along, letting your pooch sniff around while you stare into your smartphone, try putting the phone in your pocket and picking up the pace. You’ll both be better for it.

In addition, try playing 15 minutes of fetch with your dog once or twice a day. Tossing a ball or toy for your pet to retrieve not only gets him moving, it builds your bond. And an afternoon a week at a dog park or a doggie playdate is a great way to socialize your pet and work in more active time.

The other piece of the weight-loss puzzle is, of course, diet.

It can sometimes be hard for a pet owner to grasp just how little food a dog needs to maintain an ideal body weight. According to VCA vets, a 10-pound dog, for example, needs just 210 calories per day. Consult with your veterinarian about how many calories your dog needs to maintain a healthy weight and get the vet’s advice on lowering your pet’s caloric intake.

Stewart started feeding Ellie a low-fat food she bought at her vet’s office. “And absolutely no treats or human food,” she says. The latter can be especially challenging for some people this time of year, when it’s tempting to feed a dog scraps from the Thanksgiving table or give him a little extra as part of a holiday celebration, but it’s unwise for many reasons, including the fact that it will defeat your dog’s weight loss regimen.

When Linda Longton’s Labrador Retriever, Abby Jo, needed to lose a few pounds, at the suggestion of her vet, Longton cut down on the dog’s kibble and began supplementing Abby Jo’s diet with canned vegetables, such as green beans and carrots. The chunky chocolate Lab soon slimmed down and stayed that way.

Vets agree that overweight pets tend to have shorter lives than pets of normal weight. According to the Association for Pet Obesity Prevention, fat pets have a decreased life expectancy of up to two-and-a-half years. And that was Stewart’s primary motivation for getting little Ellie back down to fighting weight. “She’s more alert. She’s happier. And I feel like she’s going to be with us a lot longer.”

And what dedicated pet owner doesn’t want that?