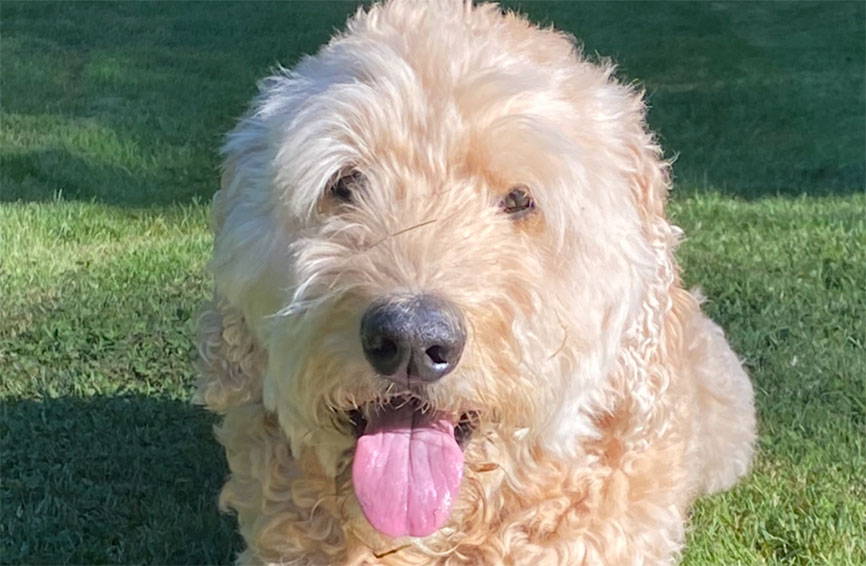 Yakky is a 9-1/2 year old Goldendoodle, who pet parent Merrie says is a gentle giant with a sweet disposition and a submissive grin to beat all others.

“We never get tired of being greeted with that funny crooked smile; however, he most often greets us with a toy in his mouth and you can only tell he’s smiling by the how much his eyes are squinting,” she said.

As part retriever, Yakky’s favorite toy is a tennis ball. He will sit with the ball in his mouth and look at his dog dad until he can no longer resist those big brown eyes staring at him longingly. Merrie said that Yakky is happy to go anywhere as long as it’s with his family, and he is most content when the family is home together.

As a young dog, Yakky attended several levels of training classes and received his Canine Good Citizen award, then went on to help train reactive dogs with his calm demeanor.

“Yakky loves everyone, and everyone loves Yakky.  It always melts our hearts when people tell us how special he is, and it happens all the time.  From family members to every vet’s office he’s been treated in, as well as strangers he greets on walks, he seems to touch the hearts of everyone,” Merrie said.

One day last November, Yakky suddenly became lethargic and wouldn’t eat.  That night, he indicated he was in pain, but his pet parents couldn’t identify where.  The next morning, they took him to his regular vet and they identified the pain as coming from his abdomen.  An x-ray indicated a mass on one of his kidneys.

The tumor was blood-filled and the walls were thin.  The vet said it was only a matter of time before it would burst and fill his abdomen with blood.

Merrie met with an oncologist who thought the odds were not good for Yakky.  After an abdominal ultrasound, the surgeon said they could be wrong about it being cancer, and the only way to know was to remove it, which also meant removing the kidney it was attached to.

The ultrasound had shown that there were no other vessels involved, and that they could remove the tumor and kidney without complications; it would be a straightforward procedure.  Merrie and her husband went home, gave it some thought, and decided to go ahead with the surgery, even though it was going to be a big hit on their savings. Then, Merrie remembered that Yakky was covered by a Healthy Paws policy.

“Had we not had pet insurance, we wouldn’t have been able to afford this surgery,” Merrie said.

The surgery is a success

The tumor and kidney were removed without any complications.  His remaining kidney values started to change within hours, so he had to stay in the hospital three days longer than anticipated.  That change was not uncommon, but he bounced back slightly slower than anticipated.

“During those three days, we received a call from the doctor saying that the results on the tumor were back, and that much to their shock and pleasant surprise, the tumor was benign!  We celebrated!!!!!!,” Merrie said.

The following day, Yakky was able to come home.  His recovery required someone to be home with him for two to three weeks.  He needed many different oral medications throughout the day and subcutaneous fluids given twice a day.

“He was such a champ through it all.  He handled each day with complete cooperation, making some of the jobs we had to do so much easier,” she said.

Yakky has made a full recovery and is expected to have a normal life span. He will need follow-up blood work and values checked on his remaining kidney every three months, but he is happy and healthy, Merrie said.

“Today, Yakky is enjoying chasing his ball, going on walks, and is getting ready for a nice vacation with Mom, Dad, and little brother Wallie in the motor coach,” Merrie said.

“Much to my shock and surprise, Healthy Paws started to deposit money directly into our bank account within a few days of filing the claim.  I couldn’t believe it!!!  I felt grateful that Healthy Paws came through.  It made going into this surgery a little easier financially,” she said. “I’m so impressed, grateful, and very happy to be a Healthy Paws customer!!”