It’s well been established that military veterans who are suffering from post-traumatic stress disorder (PTSD) benefit from living with service dogs who ease their anxiety and depression and help with daily tasks.

Nonprofits such as K9s For Warriors, Dogs2DogTags, Pets for Patriots, and Rescue Dogs Rescue Soldiers have been trying to meet this need for years. And since many of these organizations rescue pets from high-kill shelters to train, it’s been a windfall for homeless pets as well.  The Healthy Paws Foundation has supported all these organizations with donations in recent years. 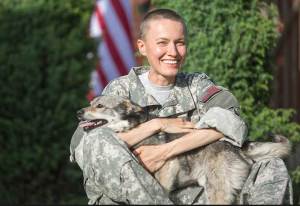 Now the Department of Veterans Affairs, Congress, and President Joe Biden are acknowledging the benefits of specially trained service dogs for veterans with a new law signed by the president last week.

The Puppies Assisting Wounded Servicemembers for Veterans Therapy Act — PAWS — requires the VA to establish a five-year pilot program to provide service dogs and training to veterans with PTSD.

“This amazing bill will help connect more veterans with service dogs and have big impacts on improving veteran’s mental health and wellbeing,” said Rep. Mikie Sherrill, D-N.J., a Navy veteran and a co-sponsor of the bill, which passed with bipartisan support.

The law should give a big financial boost to the nonprofits that are accredited service dog training organizations, as the government will be partnering with them to train and match dogs with veterans.

“This bill is a critical step in combatting veteran suicide, and we’re confident in the path ahead for Service Dogs ultimately becoming a covered VA benefit to veterans with PTSD,” said Rory Diamond, CEO of K9s For Warriors.

Here are some sobering facts about veterans and PTSD, according to the VA and K9s for Warriors:

And now the good news…

Helping soldiers live more healthy and productive lives and saving hundreds of shelter dogs — this new law sounds like a win-win to us.