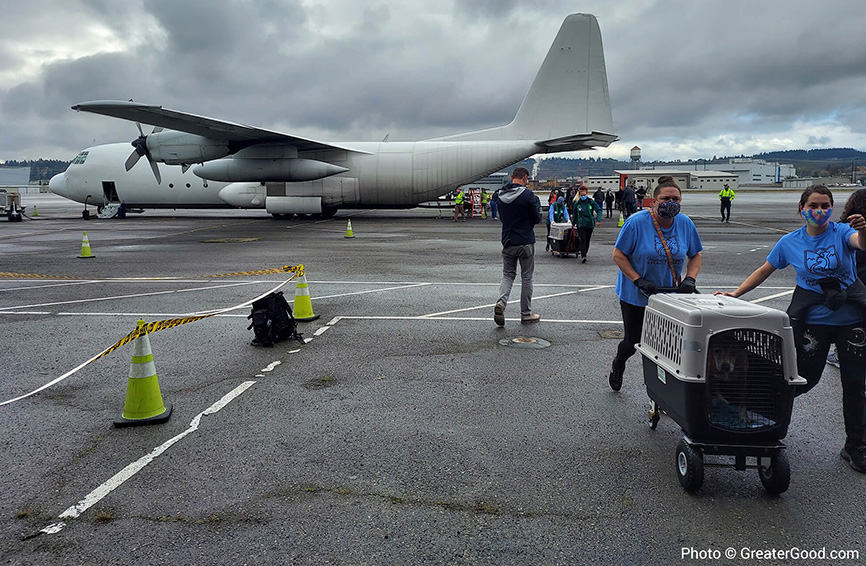 The paws have landed! A flight that arrived at Boeing Field in Seattle last Thursday may just have been the cutest ever, and certainly the furriest. A Hercules C-130 cargo plane landed with more than 600 cats and dogs brought from overwhelmed shelters on four of the Hawaiian Islands.

All pets arrived safe and healthy, and many are already on their way to their forever homes.

Coordinated by Greater Good Charities and Wings of Rescue, the flight dubbed Paws Across the Pacific was believed to be the largest pet rescue flight in history. The Healthy Paws Foundation donated $20,000 to the cause. The foundation provides cash grants to no-kill pet adoption nonprofits and is funded by Healthy Paws’ “Every Quote Gives Hope” and “Refer-A-Friend” programs.

The homeless Hawaiian pets are being distributed to shelters in Washington, Oregon, Idaho, Montana, and British Columbia, where they’ll be quickly adopted into loving forever homes. While Hawaii’s shelters are full, many in the Pacific Northwest have space because of an increased interest in adopting pets during the pandemic.

“It was a fantastic day,” said Greater Good CEO Liz Baker, who adopted a puppy of her own from the flight, adding that the effort couldn’t have happened without hundreds of volunteers and shelter staff in Hawaii and the Pacific Northwest.

The flight was conceived because pet shelters in Hawaii are in a COVID-19 crisis as normal operations have been affected by months of shutdown, economic downturn in a heavily tourist-dependent economy, and routine flights to the mainland halted. The rescue of these pets will make space in Hawaii’s shelters for at-risk pets who otherwise wouldn’t be able to receive necessary care to survive.

In addition to flying pets to their new families, Greater Good Charities left behind critical medical supplies and disaster kits to assist the shelters in the case of a hurricane or other natural disaster.

See videos and photos from the historic event here.