While it may be unthinkable to dog and cat lovers who live in the U.S. and other Western countries, the custom of raising animals we consider to be pets and family members to be sold as meat is still a sad reality in some Asian countries such as China and South Korea.

The Humane Society International (warning: disturbing images) estimates that 30 million dogs and 10 million cats are killed for human consumption across Asia each year, and there are 1,000 dog meat farms in South Korea alone.

Dog and cat traders snatch animals from the streets, steal pets from backyards, buy them from owners, or breed them. The animals suffer terrible conditions as they are crammed together in cages and trucks and are then killed inhumanely.

While the popularity of dog meat is waning as attitudes shift, the city of Yulin in the region of Guangxi recently held its annual dog meat festival as scheduled in June. Dog meat is mainly, but not exclusively, eaten by older men who still hold a mistaken belief that the meat has special health benefits, the Humane Society says.

How some rescues are saving dogs from ‘meat farms’

Many rescue groups in the U.S. focus their efforts solely or partially on saving these dogs bound for meat markets. The Healthy Paws Foundation, whose mission is to help pet rescues and animal shelters by providing grants to help fund medicine, food, shelter, and operating costs, is donating $20,000 to four of these rescue groups. 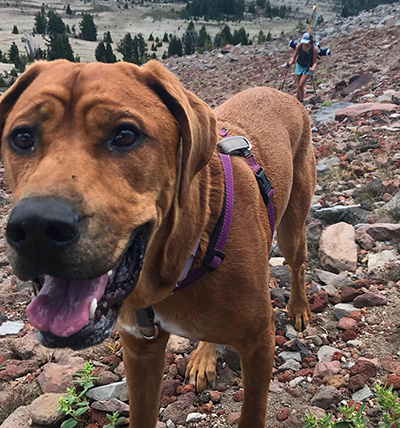 A dog that was saved from South Korea now has a great life hiking in Oregon.

Most of these groups partner with rescue groups in the countries affected where local volunteers pick up dogs in the streets or sometimes purchase them from meat farms or people who don’t want to keep their pets. The dogs are screened for health and behavior issues, and receive some medical care in their home country. The U.S.-based rescue groups pay for airline transport for healthy dogs and recruit volunteer travelers to accompany them on flights. They then find them forever homes in the U.S.

COVID-19 and the resulting travel restrictions have made it challenging for these groups to transport dogs to the U.S. but they are still working with animal welfare groups in those countries to move dogs into shelters where they can be cared for until travel becomes more practical.

Marianne Cox, founder of Street Dog Hero in Bend, Ore., said her group purchased and shut down a dog meat farm in South Korea two years ago, moving the dogs to a Korean shelter. The farm had 33 puppies and most have been brought to the Pacific Northwest and adopted out, but there are still 10 dogs in the shelter that they have not been able to transport because of COVID-19.

Street Dog Hero will be receiving $5,000 from the Healthy Paws Foundation to help in their efforts.  She said it costs about $600 just to transport one dog from overseas, so donations help meet that need.

“Besides those dogs, we also work with rescue partners in China and South Korea who rescue dogs from meat markets, streets, and horrible situations. Never did I ever think three years ago when I started Street Dog Hero it would be where it is today but with the right team and amazing volunteers, fosters, and rescue partners around the world, change can happen and is happening. This donation will help us continue to fight for dogs all over – and this definitely includes meat farm pups,” she said.

Rescuing a dog from a South Korean meat farm

One family who adopted a dog from South Korea said the pup has become a beloved part of their clan, even though it has taken many months for him to feel comfortable, and he possesses some unique quirks. 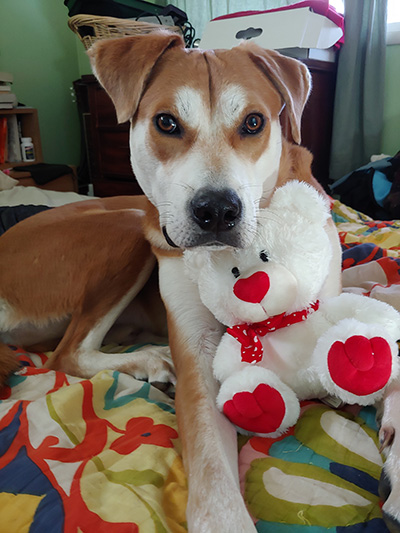 Nico was rescued from South Korea by Street Dog Hero.

Erin of Eugene, Ore., said she had been looking on Petfinder for a rescued dog about a year ago when she came across a photo of a sweet-looking mixed breed Jindo (a Korean breed that looks a bit like a white Husky) dog who was about 8 months old and was being cared for by a foster family with Street Dog Hero. She was looking for a dog that would be good with kids and other pets, not aggressive, and who weighed about 50 pounds. This dog ticked all the boxes, and when they met him, she, her husband and two teenagers fell in love with him, even though he was timid and fearful.

They named him Nico and took him home, where he refused to go in the house and instead hung out in the yard. He was especially fearful of her husband. Erin worked with him for weeks, hand feeding him and putting bits of hot dog closer and closer to the house, then inside, until he finally would run in to grab it, then run back out. She spent hours outside during the day working on getting him to trust her.

Finally, after about a month, Nico was willing to come in, but even then he hid under the kitchen table and wouldn’t interact with anyone except her. She hired a trainer and kept working with him, convincing him to go for short walks. Car rides were terrifying for him. Erin found a mobile vet so she wouldn’t have to take him in the car.

The family then decided to adopt another rescued dog, a smaller 4-year-old mutt named Millie who hailed from Guadalajara, Mexico, and was also in the care of Street Dog Hero. Millie was a much more social dog, as she had lived on the streets and probably had to be friendly to survive. The two dogs took to each other immediately, and Millie set out to teach Nico, who was now about 80 pounds, how to be a dog.

“We got an emotional support dog for our dog,” Erin quips.

Nico began to follow Millie’s lead and learned “dog things” such as chewing on a chew toy, eating from a bowl and taking walks without fear. Nico started to warm up to other family members. While Nico will probably always be a shy and cautious dog, he’s come a long way.

“He still doesn’t like the car, but he is going on longer walks. He sleeps on the bed with us and he loves his dog Millie. I don’t know if he will ever be a typical dog, but we love him and feel honored we can give him a safe home,” Erin said. 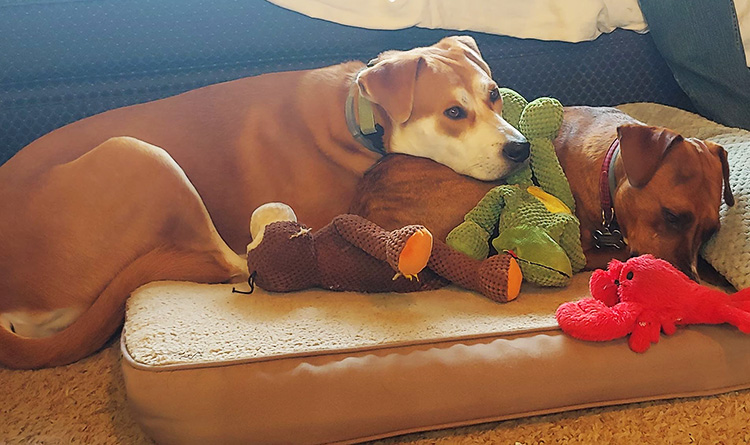 Nico, from South Korea, and Millie from Mexico, are the best of friends.

Each of the rescues that the Healthy Paws Foundation is supporting will receive $5,000. They are:

The Healthy Paws Foundation receives its funding from the Every Quote Gives Hope™  and the Refer-A-Friend programs. The foundation has distributed more than $1 million since its start 10 years ago.

Three dogs that were rescued from South Korea by Street Dog Hero.

Dog meat is becoming less popular in China, and there have been hopeful signs that the government is moving to curb the consumption of dogs for meat. Pet ownership is becoming more common in Asia, which is helping to shift attitudes, especially among younger people.

Hong Kong, the Philippines, Taiwan, Thailand, and Singapore have banned dog meat; and most recently, Indonesia pledged support for a ban.

Two cities in mainland China – Shenzhen and Zhuhai have banned the consumption of dog and cat meat.  In addition, the Chinese government recently reclassified dogs as companions instead of livestock.

Attitudes also appear to be changing in South Korea. A survey by Gallup Korea conducted in June 2018 shows that 70 percent of South Koreans say they will not eat dog meat in the future. Two Korean groups — Korea Animal Rights Advocates (KARA) and Korean Animal Welfare Association (KAWA) – have helped close some of the country’s largest dog slaughterhouses and dog meat markets.

While animal rescues are doing what they can to raise awareness and shut down the dog meat trade, it is these attitude and cultural shifts that will eventually end this cruel practice.

For each person who requests a price quote from Healthy Paws, we donate to the Healthy Paws Foundation, which supports homeless pets. Find out more about dog insurance (and cat insurance) and start by getting a free quote.