Blog / Community / Helping the Homeless by Caring for Their Pets
Community

Helping the Homeless by Caring for Their Pets 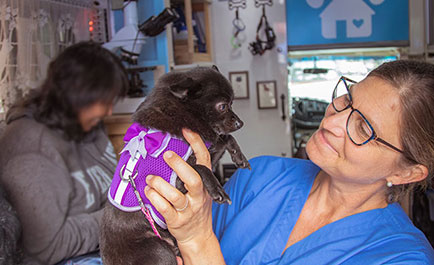 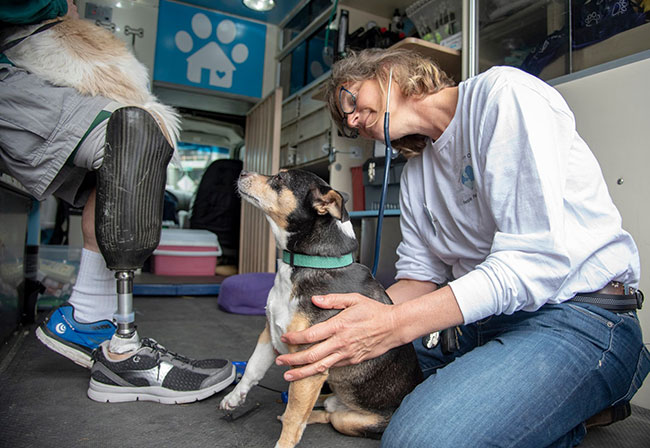 It’s a cool morning in October and a half dozen people, many of whom are experiencing homelessness, are gathered in front of the downtown Seattle office of Real Change, a newspaper that focuses on issues of homelessness and is sold mainly by people experiencing it themselves to earn a little income. They each have a dog or cat with them, either on leashes or in travel containers.

They are here to see Dr. Hanna Ekström, a veterinarian who founded Seattle Veterinary Outreach, a mobile vet business that cares for the pets of people who otherwise could not afford care. She bought an old medic unit van and has fitted it with everything she needs to perform basic medical services and minor surgery, give vaccines, spay and neuter and inject microchips. Twice a week, she sets up shop in front of places vulnerable populations are likely to frequent such as the Real Change office and homeless shelters. In just nine months, she has served more than 204 pet patients and built relationships with many individual pet parents and social service agencies.

The service keeps the pets healthy and also allows this struggling population to keep their furry companions, which is hugely important to their own well-being and stability, Ekström said. Some homeless pet parents will avoid jail and suicide just because they are worried about what would happen to their pets without them, she said.

“The human-animal bond is even stronger in people who are unsheltered. In some cases, these animal companions are all they have. We have seen how the health and welfare of humans and animals are firmly intertwined. And when we build a relationship with the people, we are in a position to get them help too. They may not trust other professionals who try to help them, but they do trust their vet,” she said. 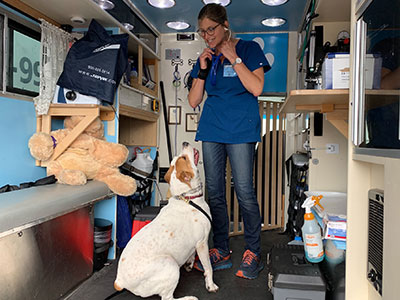 Sustained by donations and volunteers

Ekström, who still works in private practice in addition to the volunteer project, has funded the operation with foundation grants and donations, and skilled volunteers do much of the work of checking in patients, assisting with care and keeping records. The organization keeps all the pet and pet parents’ information in a database so they have accurate histories. All pets that are old enough are microchipped and spayed or neutered. Care is offered at no cost to those with no income and on a sliding scale for people who can afford to pay something, but not the amount a typical vet clinic would normally charge.

The Healthy Paws Foundation, which donates to organizations that help homeless animals and shelters, is supporting SVO with a $5,000 grant. For every person who requests a quote from Healthy Paws Pet Insurance, a $25 donation goes toward a homeless pet’s medical care.

Helping people, one connection at a time

While the pets are the primary patients, Ekström uses her time with the pet parents to also ask questions about their lives and determine what kinds of problems they are struggling with. She is developing connections with local social service agencies that can help with the human needs.

The first customer on this morning is an older woman who brings in her 14-year-old cat who isn’t eating enough and vomits frequently. The client chats amiably, sharing details about her life: She is living with her husband in low-income housing, takes the bus everywhere, sells Real Change and is struggling with arthritis. 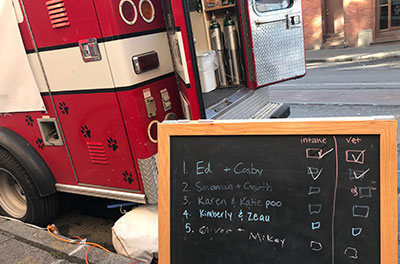 The woman is hard of hearing and can’t read, so Ekström speaks loudly with her face visible so the client can read her lips. Ekström suspects a kidney problem and gives the cat a rabies vaccine shot and a pill. She gives the pet parent some special cat food to take and writes down instructions that she can have her husband read later. And she instructs volunteers to connect her to resources to help with literacy and obtaining some reading glasses.

The second client is a woman who brings her leashed 4-month-old kitten in to have her microchipped. After implanting the microchip, Ekström advises her to come back in a month to have the kitten spayed, and the client promises to do so. The woman had recently lost her previous beloved cat to a dog attack while living in a homeless encampment and now sports a colorful tattoo of the cat on her calf. She’s currently living in subsidized housing and is starting a job training program.

Ekström’s work with people and animals extends beyond her veterinary work in the Seattle area. She is also CEO of Save Their Smiles, a nonprofit that works in Nicaragua to improve the dental health of children in rural areas, and she has spent time working as a veterinarian in underserved countries.

“I love working for Seattle Veterinary Outreach because it gives me an opportunity to get to know people I wouldn’t normally meet in the course of my day-to-day life. I’ve met phenomenal people who have just lost their housing because of financial trouble or who have been traumatized. I think as someone who grew up with white privilege and who has always had a roof over her head, it feels good to share my skills as a veterinarian. I am so impressed by the strength and resiliency of our clients,” she said. 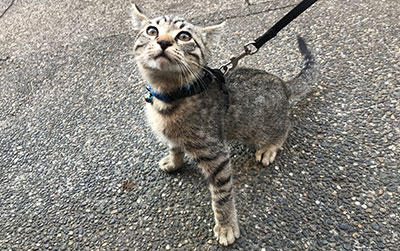 A kitten awaits an appointment to be microchipped.

Ekström and her team are starting to make a difference in the lives of some of the pet parents. One client had brought in her dog, Harry, who was dying of cancer. A few weeks after he passed, she called and said she was so grateful for the care she had received that she wanted to begin volunteering.

Ekström learned that her new volunteer had a master’s degree in computer science but had not been able to work since 2007 because of medical issues. She had volunteered at several food banks but needed some recent work experience to become more marketable. Ekström offered her a part-time job as the clinic’s lead receptionist.

“Luckily, we obtained funding and were able to offer her a real, paying job, which hopefully will lead to a another real, more full-time job,” Ekström said.

Isabella Brooks, one of the volunteers who has worked with Ekström, who she calls an “amazing doctor and teacher” said she has seen firsthand what a difference SVO has made in the lives of low-income people and their pets. Treating people with dignity and small kindnesses can create a ripple far beyond the time they spend in the clinic, she said. Recently, she saw Ekström tying the shoe of a woman whose arms were full with donations and her pup.

“I have noticed a lot of heartwarming moments while working at SVO clinics – most are small moments where you make someone genuinely smile who you know has had a hard life,” she said. “By providing our patients with preventative care, we are protecting both them and our community as a whole. Additionally, having these animals to care for gives people something to feel good about, something to focus on, and something to strive to be better for, even if they can’t strive to be better for themselves.”

Did you know that Healthy Paws has a foundation that supports homeless pets? And each quote means a donation is made to pets in need. Find out more about pet insurance, and start by getting a free quote.