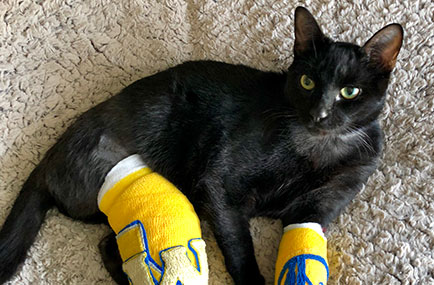 Marco and Megan of Livermore, Calif. had adopted their 3-year-old cat Jax from an animal shelter when he was just 3 months old. He quickly became part of their family.

“He is a very vocal and active cat and loves to cuddle and lay on your face. His favorite toy is his fishing pole with feathers on it, he will play with that toy for hours and if the dog gets too close to it, he even growls at him. Jax is quite the little piggy.  Anytime he hears the treat jar he comes running,” Marco wrote.

One day, Marco was at work when he got a phone call from the animal shelter saying they had Jax, who was microchipped. The shelter told him Jax was in bad shape and he better get there quickly.  Marco learned that his neighbor had found him under the deck and he had been crying out. He found Jax to be in shock and unable to move his hind end when he arrived and he rushed him to the emergency vet.

They are still not sure exactly what happened to Jax but it’s likely he was hit by a car or fell from a great height. The ER vet stabilized him and performed x-rays, which showed a fractured left hip, a broken left ulna and dislocated radius and a right hind leg ligament tear. He also had a large cut on his hindquarters.

“The whole thing was very scary and stressful. I knew that he would have to have multiple surgeries and weekly bandage changes,” Marco said.

The next day Jax had surgery to repair the fractured pelvis with plates and wires and was given a blood transfusion. And since Jax couldn’t move due to all his injuries, a urinary catheter was placed. Then four days later, the cruciate ligament repair was performed, and the day after that, the radius and ulna on the left side were stabilized. Jax was finally ready to go home a week after the horrible accident.

Incredibly, three months after the surgeries, Jax was doing great and even walking around. Today, more than a year later, he is completely recovered.

“We are so thankful for Healthy Paws, we couldn’t have done it all without you,” Marco said.