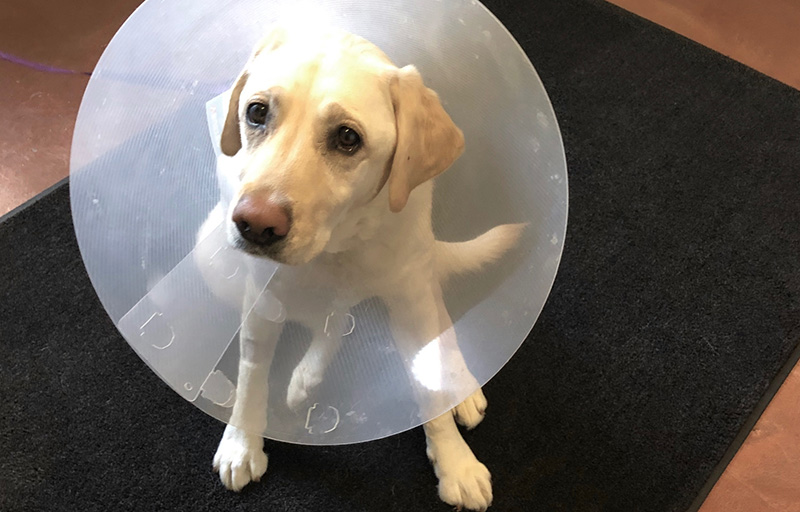 Blossom is a three-year-old yellow Labrador who loves going with her pet parents Toby and Cheryl to a big off-leash dog park on a river near their home.

It was their usual Saturday ritual to go to the park where Blossom would burn off energy running in the tall grass looking for lost tennis balls and trying to entice other dogs to chase her. 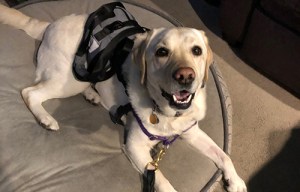 But one Saturday about a year ago, something seemed off. She had tired quickly, but didn’t show any signs of being hurt and seemed eager to stay at the park and continue playing. When they returned home, Blossom napped, dreaming and running in her sleep.

After her nap, Blossom did not want to put all four feet on the ground. Toby felt her left and right legs. She didn’t appear to be in pain or react when he moved her legs around. He only felt some minor swelling in her left paw pad. Suspecting she had overextended her knee at the park, they scheduled an appointment with their vet.

By the following day she was walking without limping or stiffness, and Toby considered canceling the appointment. But then he remembered a quote from Robert M. Pirsig, author of “Zen and the Art of Motorcycle Maintenance”: “The truth knocks on the door and you say, ‘Go away, I’m looking for the truth,’ and so it goes away.”

“The truth here is that we didn’t know what happened. It is better to ask the doctor,” Toby said.

Getting the right diagnosis

The veterinarian recommended that they look at the knee and performed an x-ray of her leg.

The vet did not see much scarring in the image and thought she might have just pulled her ligament and could recover with just rest.

But the vet recommended a specialist to review the x-ray and gave them some pain pills. They made an appointment at a recommended surgical center.

“Blossom was all in for the road trip as she still believes any trip to a vet is a good thing,” Toby wrote. “The day did not disappoint. Everyone she met was happy and quick to accept her.”

The doctor performed another x-ray. The vet could feel her knee slide sideways and backward and concluded the knee’s cruciate ligament had failed her – a cranial cruciate ligament (CCL) tear, similar to an ACL tear in humans. The cruciate ligament is the most susceptible to injury in dogs and makes up about 85 percent of all canine orthopedic injuries.

Blossom was a candidate for tibial plateau leveling osteotomy (TPLO) surgery, which is intended to stabilize the joint that is similar to a human knee. While its success rate is high, TPLO is an invasive surgery as the tactic is to completely change the dynamics of the dog’s knee so that the torn ligament becomes irrelevant to the stability of the knee itself. 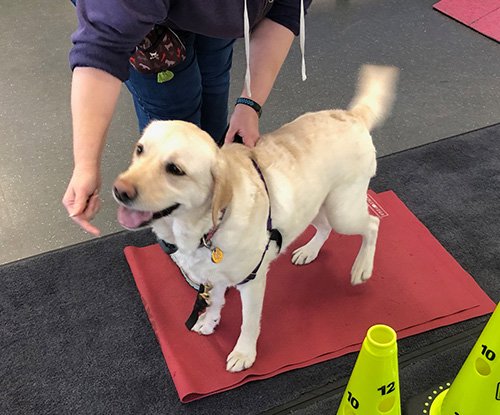 “I would not recommend opening the brochure they give you. Unless you like to see x-rays of a dog’s knee being shaved level, the bone being turned 180˚, and pinned in place with a plate and screws,” Toby said.

During the procedure, the tibia bone is cut and the tibial plateau is rotated so the femur won’t slide backward where the bones meet. This eliminates the need for the cruciate ligament entirely and returns stability to the joint, as explained on Top Dog Health.

After surgery, most dogs will quickly begin to use the limb again, but it’s important to keep dogs from overexerting themselves, especially in the critical first 12 weeks of recovery.

Toby and Cheryl spent a lot of time working with Blossom during those three months, including taking her to cold laser therapy and hydrotherapy (water treadmill). Blossom’s homework was another two hours of strength training exercises and massage therapy each day. 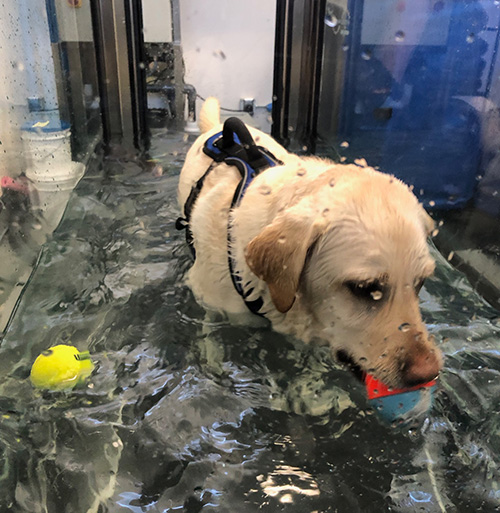 “It’s not easy but well worth it,” Cheryl said. “She gradually improved but we did have to continue physical therapy for longer than we were expecting. Her physical therapy team wanted her leg to be stronger before stopping the appointments to prevent future injury.”

Ultimately, the surgery, rehab, and medications rang up to $9,325, with Healthy Paws reimbursing $6,848 of that.

“Well, we are very happy to have Healthy Paws Pet Insurance. When getting a quote for TPLO surgery, they only give you a range. They have too many unknowns, so we were quoted $4,300 to $5,800. Like getting your car fixed they may find something when they look under the hood,” Toby said.

Now a year later, Blossom is mostly recovered and is still working on trusting the new leg. She did develop a limp after a play session at the beach, but the vet said it was just a flare-up of arthritis and not connected to her original injury.

She’s been to a local off-leash park that’s smaller than the one where she was injured. They’ve been increasing the time she spends there and keeping a close eye on her to avoid her getting too excited and re-injuring herself.

“We make sure we exercise Blossom every day. She loves playing with her physical therapy equipment here at home. She is a very high energy pup and we want to give her the best life possible,” Cheryl said.

The Healthy Paws Pet Insurance plan covers CCL surgery and rehabilitation after the 15-day waiting period as long as your pet has shown no history of a cruciate ligament problem or limping on either side prior to enrolling.

Prioritizing the health and well-being of your pets means you’re a great candidate for pet insurance. Find out more about dog insurance (and cat insurance) and start by getting a free quote. Bonus: Each quote means a donation is made to homeless pets.