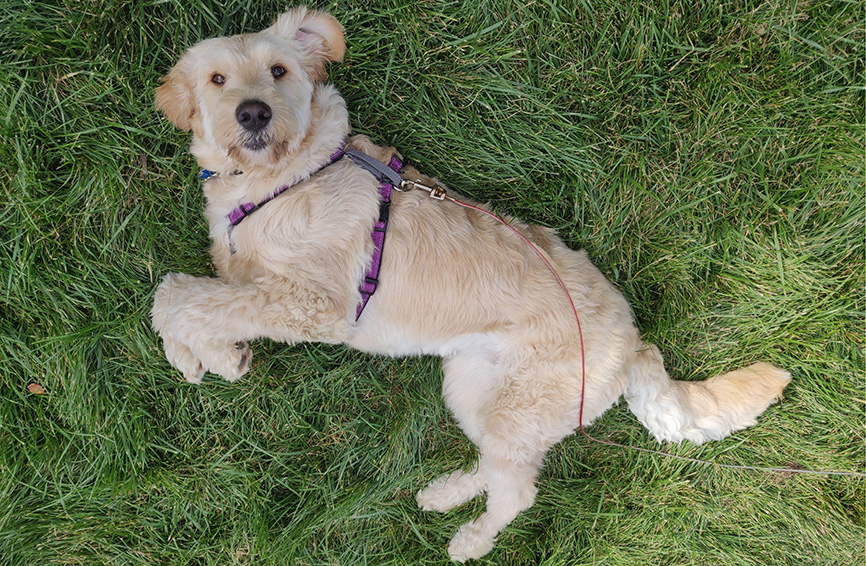 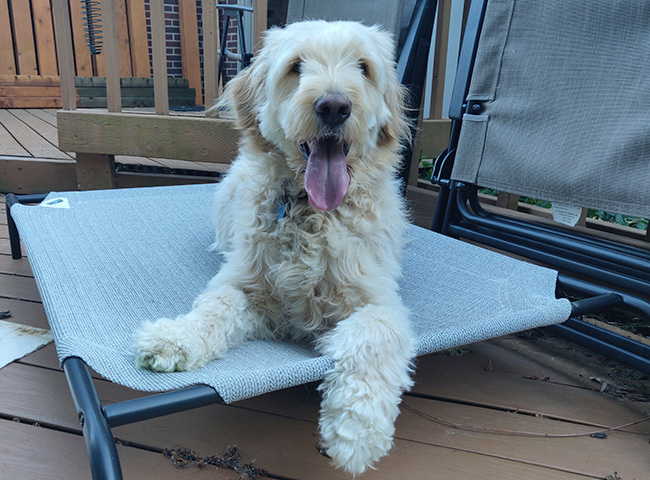 Mandy is a 3-year-old Goldendoodle who loves people and lives for attention. At the dog park in Wixom, Michigan, she’s more focused on earning pets and belly rubs from people than on the other dogs, says pet parent Cecilia.

While she can be lazy and timid, she loves to chase squirrels when she spots them on the bird feeders. She’s fond of fetching her Frisbee, but this sensible girl finds running for exercise pointlessly repetitious.

One day in July, Mandy wasn’t eating her food or drinking water. She normally liked to graze throughout the day, but that day she left her kibble untouched. Cecilia and her fiancé initially thought perhaps their furry best friend didn’t like the salmon flavor they were trying, but then they noticed her dry nose, excessive whining, and heavy breathing. She also seemed uncomfortable transitioning from standing to sitting or lying down, and vice versa.

When they took Mandy to the veterinarian, he noted that her weight was down, she appeared dehydrated, and she had a fever. After running through her symptoms, he recommended they take her to an emergency clinic to determine the underlying cause.

To the emergency vet for diagnostics

They went directly to a 24-hour emergency hospital where the vets took x-rays and blood work but could not find a cause for the fever. After injections of fluids, antibiotics treatment, and an overnight stay, Mandy was improving even though they still had not identified a cause. She was eating again, and there were no signs of infection.

The hospital considered releasing her with antibiotics and an appetite stimulant, but that evening, her temperature had shot back up to 103 degrees (the normal body temperature for dogs is 101 to 102.5, according to PetMD). The vet called with the news that her x-rays indicated right lung pneumonia, and they wanted to put her on oxygen. There were signs of fluid buildup in her abdomen around the lungs (pleural effusion) that needed to be extracted and sent to a lab.

The couple received an updated treatment plan and a cost estimate of about $5,000 because of the additional time in intensive care and the need for oxygen.

“We were well aware of the increasing bills and we were blessed to have a Healthy Paws plan. It meant that we could afford almost anything Mandy could need with minimal financial hardship,” Cecilia said.

A diagnosis of pleural effusion 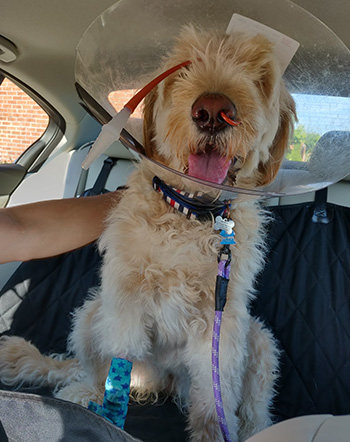 The next morning, a high white blood cell count led the vets to suspect lung torsion, an uncommon condition where the lung lobe becomes twisted. An accurate diagnosis would require transfer to a more advanced pet hospital where Mandy could receive a computerized tomography (CT) scan to determine the root cause of her sickness.

“We picked her up and transferred her to the hospital they recommended, the kind with 20+ board-certified veterinarians ranging from behavior to cardiology to oncology to surgery. After getting her checked in and examined, the estimate for her treatment was $4,000 – $6,000, plus or minus 15%,” Cecilia said. “We also were asked to confirm if we wanted Mandy resuscitated in the event of cardiac or respiratory arrest. They ask this of every pet admitted, so we knew it wasn’t an indication of her condition, but having to think through why it was being asked and what it meant for Mandy’s quality of life took an emotional toll.”

Over the next three days, Mandy’s treatment continued while they performed more tests, including blood work, x-rays, cytology, chest fluid cultures, and the CT scan. The CT scan showed that while she did not have lung torsion, two of Mandy’s right lung lobes had collapsed. The good news was that there were no heart issues and no signs of cancer (common causes of pleural effusion). They still don’t know what caused the condition, although Mandy had gone to the vet for pneumonia months earlier. 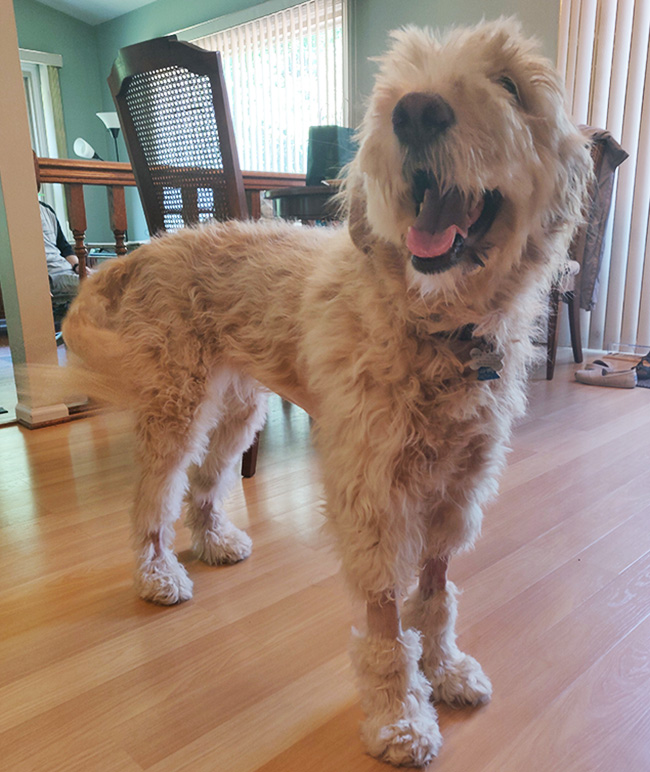 Finally, after six days in the hospital, Mandy was breathing well enough to be weaned off the oxygen. Due to COVID-19, the couple couldn’t see her yet, but the vets sent a photo to show how she was doing.

The next day, her heart and lungs were normal, and she was breathing comfortably without oxygen. Finally, Mandy could go home with antibiotics and anti-nausea medication.

Today, months later, Mandy is back to living her best life and is appreciating having her pet parents home more during the pandemic, Cecilia said.

“With us home a lot more, she gets to be as attached to us as she wants, often sleeping on our feet, behind our chairs, or in her bed a few feet away. She’s back to wrestling on her back with dog friends and jump-tackling humans that pass through our doors, despite our disapproval. We took her out running with us again. We’re proud to say she trotted all 3 miles with minimal complaint just last week,” Cecilia wrote.

Cecilia is the kind of person who is always prepared, and becoming a pet parent was no exception. She waited until they had a home with a fence and the ability to come home for lunch before adopting a dog.

“Pet insurance was the logical next step in my mind. With me new to dogs and Mandy new to us, I wanted to make sure we could afford anything that might happen. It felt inhumane to need to make decisions over Mandy’s life based on money,” she wrote.

She did her research to find the right choice, reading online reviews, and talking to other people and vet techs, who often recommended Healthy Paws. She liked having options to choose an annual deductible and percentage of coverage. She also wanted a policy that would include coverage for hip dysplasia should Mandy ever need it. Finally, she liked how easy it was to submit claims.

“I’m grateful to have Healthy Paws to be able to get Mandy the care she needs. At this point, we couldn’t imagine having anyone else help us with Mandy,” she said.