Many People Have Stepped Up to Foster and Adopt During Lockdown. What Next?

Anecdotally, lots of shelters have reported the happy news that dog and cat adoptions and fostering have increased since the outbreak of the coronavirus, as people who are staying home or working remotely now have more time to care for a pet. This is despite shelters being forced to close their doors to lessen the spread of the virus.

Though shelters have had to keep people from entering, they are still allowing for fostering and adoptions by appointment with proper precautions taken to protect staff and the public. The rise in fostering pets is especially welcomed as many of the shelters would quickly become overwhelmed with too many pets because of barriers to adoption right now.

One Florida shelter posted on social media that it had cleared one whole 96-capacity kennel of dogs due to adoptions and fostering for the first time in its history. In Seattle, the municipal Seattle Animal Shelter was able to move 38 animals from its kennels into foster care since early March, said Jocelyn Bouchard, deputy director.

And after adoptions initially dropped when the Seattle shelter had to close its doors, they have since picked up and remain steady with an appointment-based system. In fact, appointments are filling up several days in advance.

Adoptions from Motley Zoo Animal Rescue in Redmond, Wash., are also up dramatically and that even includes animals that were previously overlooked such as those with medical conditions or disabilities, said Jme Thomas, executive director.

It turns out those stories can be supported with data from Petpoint, a data management company that tracks the U.S. homeless pet population from nearly 1,200 animal welfare organizations in the country.

During the week of April 11-17, the number of animals in shelters was down 14 percent compared to the same period a year ago. The number of dogs in foster care was up 53 percent from last year, while cats were up 14 percent, Petpoint reports. The group notes that spring is kitten season so there are more cats needing care this time of year, which could explain the discrepancy.

The charity Greater Good has started a campaign to encourage people to foster a pet for two to six weeks. Visitors can enter their contact information and be matched with a shelter that needs help in their area.

All this raises the question of what happens to those pets that are being fostered when the quarantine is eased. And whether new pet parents who took in a homeless dog or cat will lose interest in their pets when they are free to work outside the home and travel. Saddest of all, what about people who have lost jobs and income due to the economic fallout and find that they can no longer afford a pet?

Will the shelters and animal rescue groups once again become overwhelmed? 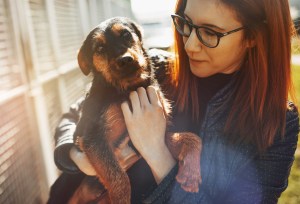 Reasons for Optimism in Post-Pandemic Environment

At least some people working in animal rescue are optimistic about the post-lockdown world.

For pets being fostered, a “foster fail” — when the foster parent falls in love with their temporary charge and decides to keep them — is the best outcome, Bouchard said. In Seattle, 65 foster pet parents have decided to keep their previously “temporary” pets so far.

“We love it when this happens!” she said.

But even foster pet parents who decide not to keep their fosters are making a huge difference, she said. In the short term, those pets are living a much better life in a home instead of a shelter, and the socialization they receive will better equip them to find a forever home. Pet foster parents can also provide invaluable information about the pet that can help them find their perfect match faster, Bouchard added.

Thomas, of Motley Zoo, believes the pandemic will actually improve people and animals’ lives, once they have recovered from the disruption and economic losses.

“I believe this experience will improve things for a lot of people, especially their outlook and view of what really matters. We have been so caught up in the ‘first world chaos’ and now we have been forced to slow down again,” she wrote. “I believe people will take an inventory of how they live their lives and spend their time. And that the bond with animals as family will improve, more than decline.”

People who have lost jobs or income may struggle to support themselves and their pets, Thomas says, but she believes help will be available for people to keep their pets.

“Finances are always a concern, surely, but that is way easier to definitively fix than finding a new home. We can raise funds if needed but we can’t just make the right home appear. I think this will be more of a poignant, guiding principle for animal welfare agencies going forward,” she said. “It will be cheaper and easier for a rescue or shelter to provide an already-placed animal some food and supportive basic vet care, than to take them in and re-home them again.”

Thomas also believes that the increased time that people are likely spending with pets they are fostering or adopting will either solidify their bond or make it clear more quickly if they are not a suitable match.

“It’s less likely that they will return them out of inconvenience,” she said. “I think if they didn’t adopt the right animal (which is what we try to minimize anyway), they will know it sooner and extra time won’t necessarily make that a rosier picture. Being home 24/7 with the wrong pet, or a difficult one, is likely to spotlight the mismatch even more so.”

For people interested in fostering but not ready to adopt, Petfinder has some great tips on how to let go of your foster dog. No. 1 tip? Choose a pet who is not a good fit for you long term.