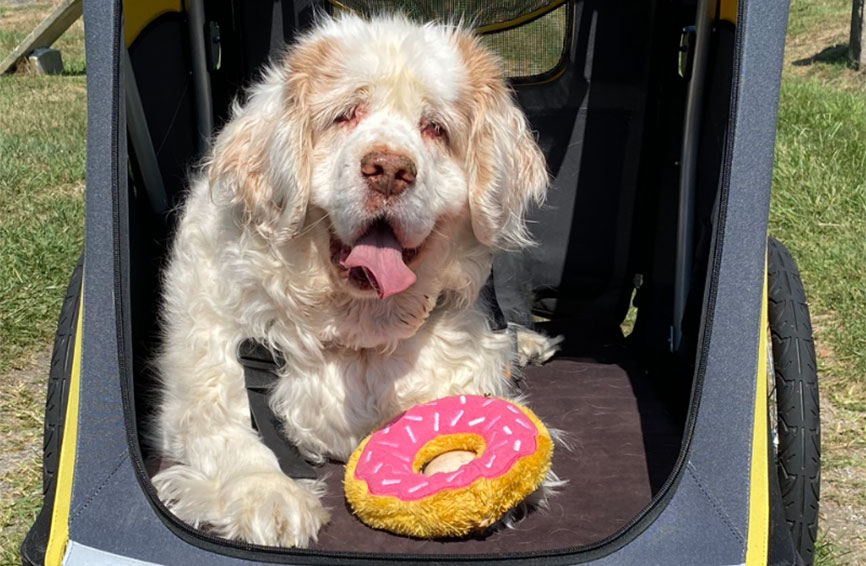 Matilda is an 8-year-old Clumber Spaniel (a breed developed in the UK for bird hunting) who was a registered therapy dog for six years while she visited universities, high schools, group homes, hospice and assisted living homes.

“Matilda loves people, and she’s great with dogs but give her a kid any day of the week,” said her pet parent Susan.  “She’s super sweet, super calm, and loves to please.”

Matilda’s vet noticed her hips were bothering her in 2016, and Susan took her to a specialist. The specialist said she was developing hip dysplasia and could wait a while, but eventually, she would need a total hip replacement. Susan started taking Matilda for monthly acupuncture and Adequan shots (a drug that inhibits cartilage loss) monthly to help ease her pain.

“A total hip replacement is a big surgery, but I wanted to give Matilda a pain-free life, as she was only seven years old,” Susan said.

She decided to move ahead with the surgery as Matilda struggled to stand and could no longer go up the stairs.

Shortly after that, non-elective procedures were halted because of COVID-19, and Susan could not get her an appointment.  She was finally able to get her to the vet in April 2020, with a surgery date for July.

After her surgery, Matilda spent a few days in the hospital in Boston. When Susan picked her up, she was able to walk out with the help of the staff.

Matilda was on crate rest for a few days, and then she showed signs of wanting to get out.  Initially, she was doing well.  Then six days later, the poor girl couldn’t walk and was falling. Susan rushed her to an ER hospital in Rhode Island where the vets determined she needed emergency neck disc surgery. They performed the surgery, and within a few days, she was up again.

She recovered quickly, and now more than a year later, she’s healthy and mobile.

The cost of hip replacement and disc surgery and recovery

The surgeries alone totaled $12,407, with Healthy Paws reimbursing Susan $8,686 at the 70 percent coverage level. In addition to the hip and spinal surgeries, Matilda is on regular pain medication and receives Adequan injections and acupuncture treatments, which average around $35 and $110 for each treatment, respectively, all covered by her plan.

“With two big and very expensive surgeries, I knew Healthy Paws would come through for us, and they most certainly did, no questions asked, and that took the stress out of all of this. Within weeks I was reimbursed for most of my expenses,” Susan said. “No hassle, no forms, and most importantly, no caps! Matilda has a long recovery, and her rehabilitation is also covered.  When people ask me if pet insurance is worth it, I say, ‘without pet insurance, I would have had to put my baby girl down, and that is not an option. I highly recommend Healthy Paws’”.

Matilda had to retire as a therapy dog in 2019 when the hip dysplasia became too uncomfortable, but she is now living a happy and healthy life.

“Matilda is doing amazing thanks to Healthy Paws; I could never live with myself if I had to put her down due to cost. She’s active again – she’s swimming in the bay which she loves to do.  She no longer struggles to get up from her bed and she enjoys her walks again,” Susan said.

As the East Coast co-chair for Clumber Spaniel Rescue & Placement, Susan was an early believer of pet insurance, having signed up another dog named Thumper on a different company’s plan in 2010.

However, when Thumper needed surgery, the company limited acupuncture treatments to 12 weeks and capped the amount paid out until the policy was up for renewal. Healthy Paws has no annual or lifetime caps on coverage.

When Susan adopted Matilda in 2012, a friend recommended Healthy Paws, and she signed her up. She recently adopted a new puppy, Periwinkle, and she added “Wink,” as she calls him, to the Healthy Paws family.

The claim scenarios described here are intended to show the types of situations that may result in claims. These scenarios should not be compared to any other claim. Whether or to what extent a particular loss is covered depends on the facts and circumstances of the loss, the terms and conditions of the policy as issued and applicable law. Insureds providing testimonials in this report have not received compensation for their statements.