One night about two years ago, pet parent Barbara and her husband Henry were awoken around midnight by the worst sound – her 6-pound Pomeranian-Yorkie mix Minnie let out an awful scream.

They tried comforting her but her screaming continued, and they rushed her to the nearest emergency pet hospital near their home in Southern California. Minnie was clearly in terrible pain, but the vet needed to perform x-rays before they could give her pain medication.

Soon, the cause of her agony was clear. The doctor said she had two of the largest bladder stones he had seen in such a tiny dog. Bladder stones develop due to a urinary tract infection (UTI), when mineral and acid salts form into crystallized solid masses. Finally, they were able to give Minnie pain medication, and she was a little more comfortable. 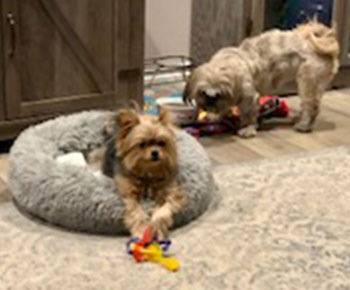 The couple went home, expecting that Minnie would be scheduled for surgery the next day. When Barbara called to check on her at 4 a.m., she learned Minnie was taken into emergency surgery as her bladder had ruptured and needed to be surgically repaired.

Understandably, they were emotionally distraught.

“We were both in tears, scared of losing our two-year-old baby,” Barbara recalls.

She came out of surgery at about 7 a.m., heavily sedated. Minnie remained in the vet hospital for several days, and in the first few, it seemed she might not make it.

“It was terrifying that we watched her seeming to get sicker and sicker,” Barbara said.

But on the fifth day, it was clear that Minnie was healing and would survive. Her recovery from the surgery was slow, but now, two years later, she’s doing fine, Barbara said.

“Minnie is the sweetest little girl.  She is tiny but thinks she can take on every dog, regardless of size, to guard her family and home,” Barbara said.  “Minnie is full of energy and always on the go for a walk, her favorite game of fetch, or riding in our bike trailer along the beach.” 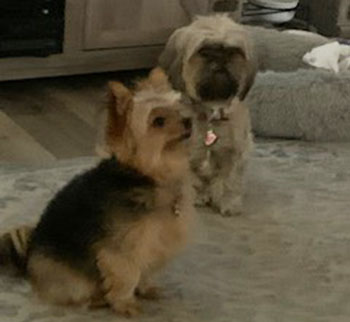 On the day of Minnie’s surgery, Barbara went to work, and several people asked what her dollar cut-off was to let Minnie go.

Barbara’s daughter had encouraged her to get pet insurance after paying hefty vet bills over the years on other pets. Now she’s a believer and purchased insurance for her one-year-old Shih Tzu Sofia.

“Since this experience, I have talked to so many about how important insurance is for their furry family members,” she said.

Protect your pets from those unexpected illnesses with no limits on payouts. Get a quote and make sure you’re covered for those dog mishaps and unpleasant surprises.