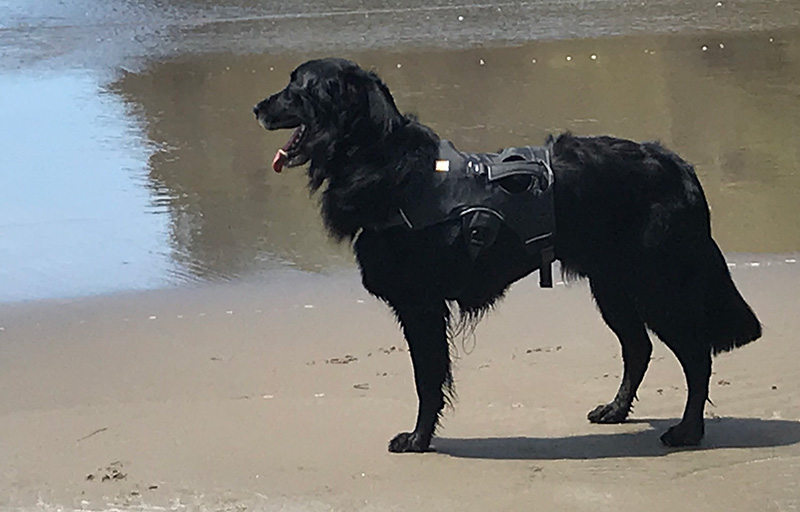 An observer might look at Neon, a nearly 11-year-old Flat-Coated retriever who is missing his left front leg and think, “Aww, poor guy.” But Neon does not have time for anyone to feel sorry for him.

Neon, whose leg was amputated last year to save him from a malignant soft tissue cancer, is a little slower than he used to be, and tires more quickly with the extra effort required, but he still does most everything he used to do, including agility training with tunnels, weave poles and hoops, said pet parent Penny. Only the jumping exercises are off-limits now. 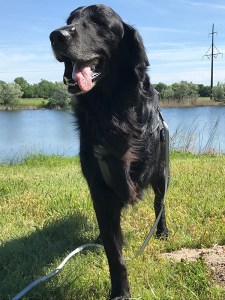 And Neon’s resilience has inspired countless pet parents whose own dogs have developed cancer, as they can see that recovery is possible and dogs can live a full life even with disabilities.

Penny, who has three other dogs of the same breed, is on the health committee for the national breed club and is active on a Facebook group where she’s heard from many people after seeing the happy outcome she has had with Neon.

The black beauty received even more notoriety when he was inducted into the Flat-Coated Retriever Hall of Fame for his many agility and field accomplishments last June. Penny traveled across the country with him from their home in Virginia to Oregon for the induction ceremony, where people were so touched by what he had overcome.

“There wasn’t a dry eye in the place and it took us over an hour to get out of the building as he was hugged and loved on by many who had lost their flat coats to the dreaded ‘C’ and had to tell us their stories.  He’s been such a ray of hope. Some very positive has come out of this unfortunate circumstance,” she said.

She said she has heard from several people who have been inspired to get treatment, and sometimes amputations for their dogs, after hearing Neon’s story.

Neon’s troubles started in the fall of 2018 when he started to display intermittent lameness in his front legs.

Penny thought her friendly, happy, driven dog might have twisted one of his front legs. She took him to multiple vets, each with a different diagnosis, with no definitive explanation.

“Radiographs didn’t show any bone damage, so it was determined he had a soft tissue injury.  But, even after rest, massage and acupuncture, the issue was still coming and going,” she wrote.

She made an appointment at Veterinary Orthopedic and Sports Medicine in Baltimore, MD to see Dr. Sherman Canapp, who she says is one of the best orthopedic veterinary specialists in the world.

After performing a gait analysis, he was able to pinpoint approximately where the issue was occurring and, upon examination, found a mass in the shoulder joint pressing on and wrapping around the brachial nerve causing the pain and lameness.  An MRI with an image-guided biopsy was performed to obtain a sample for pathology.  The results came back as cancer; histiocytic sarcoma, an aggressive form that can appear in several parts of the body. Flat-Coated Retrievers are especially susceptible to this type of cancer.

Penny consulted with a veterinary oncologist to determine the best method of treatment for Neon. They decided that removing the diseased leg would give him the best chance. In February 2019 he underwent a full left forelimb amputation at Virginia Veterinary Specialists and then was prescribed five cycles of an oral chemotherapy drug. 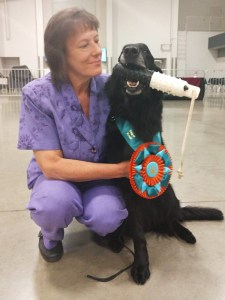 While the first week after the surgery was rough, Neon did remarkably well – his excellent fitness helped in the recovery. Ever the fierce competitor, he fought hard to beat cancer too.

“The vet told me he was up soon after surgery and able to hop out to go to the bathroom outdoors with little to no effort,” Penny said. The wound healed nicely with no sign of infection.

He also appeared unbothered by the chemotherapy.  The only problem was that the chemo drug causes liver enzymes to become elevated, so Neon was put on a drug that supports liver health during the treatment and for a couple months afterward.

“I would say he was feeling pretty much like himself two weeks after surgery,” she wrote.

Now, more than a year later, the cancer has not returned, and Neon is doing fine, having well outlived his prognosis.

Penny is glad she had pet insurance to help defray some of the costs. She long ago realized the value of pet insurance when she adopted her first Flat-Coated Retriever in 1998 and she wanted to be able to afford any health care her dogs might need.

“It’s very easy for just one health episode to wipe out years and years of savings. I still have a savings account to help cover the deductibles and co-pays, but I could never have saved enough to have afforded Neon’s care that racked up thousands of dollars in such a short amount of time,” she said.

Prioritizing the health and well-being of your pets means you’re a great candidate for pet insurance. Find out more about dog insurance (and cat insurance) and start by getting a free quote. Bonus: Each quote means a donation is made to homeless pets.