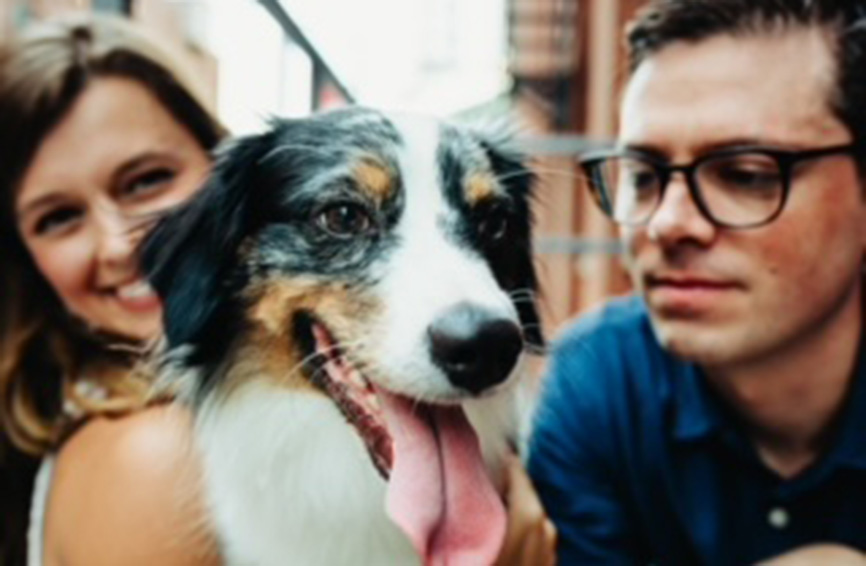 Two-year-old Merlin is a mini-Australian Shepherd with tons of personality who makes friends with all the other pups at the dog parks.

Before COVID-19, when pet parents Amber and Mike were working in offices, Merlin enjoyed coming to work and playing all day with the other office dogs.

“He loves to play fetch and when he likes to relax, he cuddles up on the couch waiting for his belly rubs,” Amber said. “It takes some time to gain his trust and love, but once you have it, Merlin will not hesitate to show his love with that adorable wiggle butt!”

About a year ago, Merlin was not acting himself. He had a fever, would not eat or drink, barely moved, and he was visibly uncomfortable. Amber and Mike rushed him to the animal hospital. 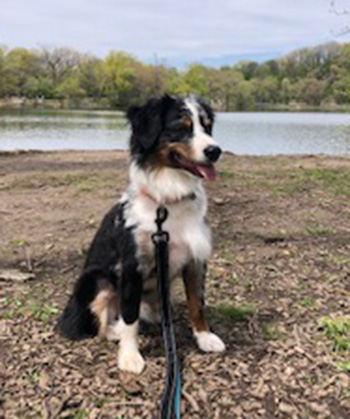 The veterinary team checked Merlin’s vitals and organ functions, and also made sure he didn’t have any broken bones.

They then shaved the area where Merlin was most sensitive and saw that his skin and fat layer had died and was starting to deteriorate and fall off. They performed some tests to see if it was a skin disease, a tick infection, an underlying issue, or if there was an accident at a previous vet visit.

Unable to determine the root cause, the team knew that they had to act quickly to save Merlin’s life. He was later diagnosed with an autoimmune skin disease, a rare condition in dogs in which the immune system attacks itself, causing serious illness, according to VCA Hospitals.

Saving Merlin the mini aussie would require removing the skin and fat layer on Merlin’s whole right side and slowly pulling the healthy skin over the wound. Several surgeries were needed, and Merlin had to stay in the hospital for an excruciating two months. He was on several pain medications and antibiotics and had to be fed through a tube initially.

“We were fortunate that the hospital staff allowed us to come in and visit Merlin often and eventually feed him breakfast and dinner. After weeks of tubes and bandages, removal and pulling of the skin, Merlin was starting to recover and was able to come home where he could heal. He had to go back to the hospital every other day to change his bandages and this was around the time COVID hit as well,” Amber wrote.

Amber and Mike were extremely grateful to have pet insurance to help cover the substantial costs and saw first-hand what happened to some pet parents who couldn’t afford their pet’s care.

“Some of the most difficult moments were watching the families in the waiting room, who had to make some very difficult decisions because they did not have the help of insurance to cover some of the many expenses. Having Healthy Paws there to help us honestly saved Merlin’s life!”, Amber wrote.

A year after his surgery, Merlin is 100% back to his normal ways — running, playing, and hiking again.

“He has a Frankenstein-looking scar along his right side but the hospital did an amazing job and his long hair covers most of it anyways! We are so happy to have our fur baby still with us healthy and happy!”, Amber said.

Amber signed up for a Healthy Paws plan when Merlin was still a puppy at eight months old. She had gone to the vet when his left knee was bothering him, which turned out to be a pulled muscle, and picked up a brochure for Healthy Paws.

“We figured since Merlin was a very active pup and loved hikes, running, and playing, it would be a good idea to have health insurance. It was so inexpensive and we thought, eh, we will never really need it but like to know it’s there just in case. Man, oh, man are we happy we have it now! We also really appreciate how easy it was for Healthy Paws to work directly with the hospital on bills while we were busy trying to do what was best for Merlin. The handwritten notes along the way also made us smile!”, she said.