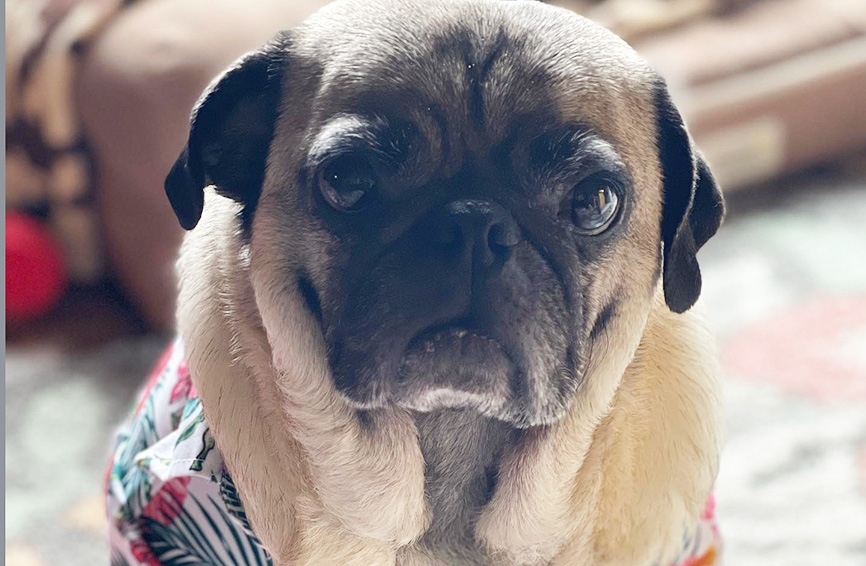 Four-year-old Brutus, a pug, is independent, funny, and super smart, and while not as cuddly as a typical pug, he likes to keep pet parent Nicole in sight at all times. He has quite the vocabulary – most words he knows are related to food, she says. 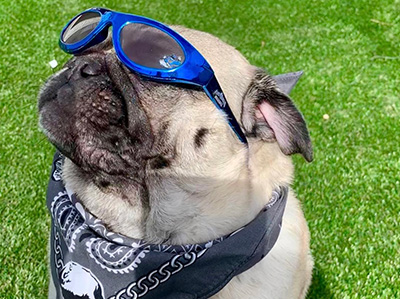 Sweet Brutus was first treated in 2017 for some skin and eye issues. In the past year, he has been plagued with health problems – seizures caused by a congenital brain condition, arthritis, hip dysplasia, and breathing problems. Keeping him stable requires a daily routine of medications and keeping a close eye on him in case he has a seizure. Visits to vet specialists and the acupuncturist are frequent too.

Nicole’s love for Brutus is such that she provides him all the care he needs, even at great personal sacrifice.

“He is a full-time job and requires constant monitoring. We never leave him alone anymore but worth all of it!” Nicole says cheerily.

Brutus the pug suffers a seizure

Brutus’s most recent health problems started in February 2020 when he was sleeping on the couch and suffered a grand mal seizure. These seizures are caused by abnormal electrical activity in the brain and can cause a dog to lose consciousness and convulse. In Brutus’s case, it lasted nearly five minutes with his paws kicking, mouth foaming, and eyes rolling.

“It was the scariest thing I have ever experienced,” Nicole wrote. “It’s been over a year, and I have to tell you, it’s still so scary,” she said.

Nicole rushed him to the emergency vet, but after scans and bloodwork, they found nothing abnormal.

Shortly after she brought him home, he suffered another seizure. Brutus was prescribed medication, which helped for a while, but the episodes came back.

The vet performed more tests to determine the cause, and this time, he was diagnosed with a mild case of hydrocephalus, a condition where fluids build up in a dog’s skull, putting pressure on the brain. The vet neurologist said Brutus probably had the condition at birth, and it would likely remain stable, neither getting worse nor better.

Nicole said the treatment for this condition is the same as epilepsy, so Brutus takes several medications, including one for nausea. 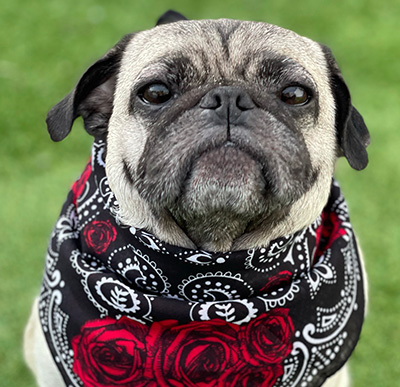 Besides the seizures, Brutus suffers from arthritis in both back legs and hip dysplasia. He has an eye condition requiring eye drops twice a day.

Also, he has bouts of pancreatitis, a swelling of the pancreas, which affects the body’s ability to digest food.

Finally, Brutus has breathing problems and nasal congestion, which may be side effects of some of his many medications. Since pugs are brachycephalic dogs — those with short noses and flat faces — they are prone to compressed airways, making it harder for them to breathe. It may require surgery to correct, but Nicole hopes to avoid this.

“He has at least four different vet specialists to treat all his issues and he goes for acupuncture about every three weeks.  I mean, he has better medical care than I do at this point!” Nicole said.

Nicole does not know how she could have afforded to care for Brutus without pet insurance. As soon as she adopted Brutus, knowing pugs are prone to medical issues, she researched to find the best pet insurance and chose Healthy Paws.

“It’s been a roller coaster of emotions, but you guys have been with us the whole way through,” she wrote. “Knowing I can bring him for treatment without going bankrupt has really made all the difference. He is able to get all the best treatment and care, and I truly think this has prolonged his life.”

How Brutus is doing now

Brutus’s seizures are considered controlled with the medication, but he still suffers an episode about every one or two months. If they are too severe or frequent, Nicole takes him to the emergency vet.

His other issues are treated regularly with medication and acupuncture. Nicole is trying to avoid any surgeries that would be too hard on him.

Brutus’s health problems are chronic and will require management, but he still likes to play with his toys, chew on a bone, and go for short walks, so

Nicole gives him the best quality of life she can.

“He does still have some bad days where I just know he doesn’t feel good. But we try to make the best of the days he does feel OK by going for walks, playing fetch and just enjoying his company,” she said. “He is really a trooper and so smart and just a really good companion.”

Protect your pets from those unexpected illnesses, with no limits on payouts. Get a quote and make sure you’re covered for those dog and puppy mishaps and unpleasant surprises.