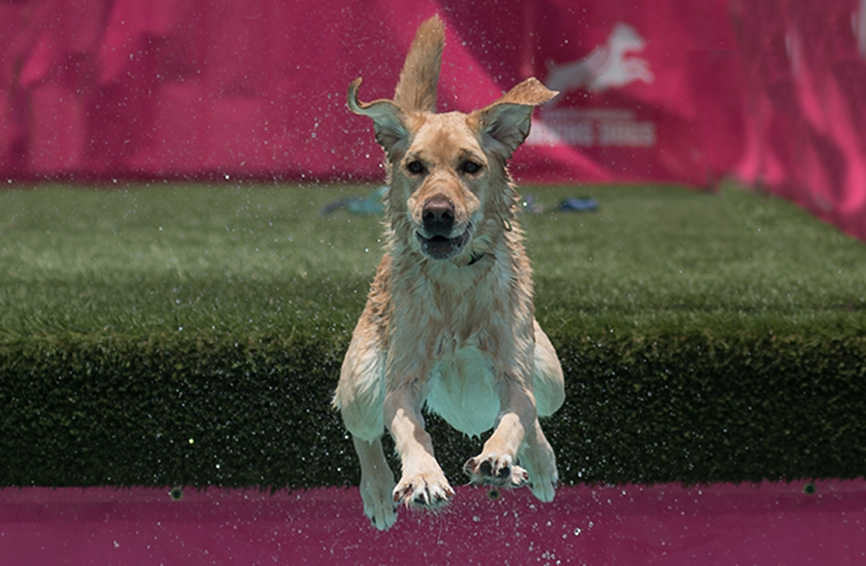 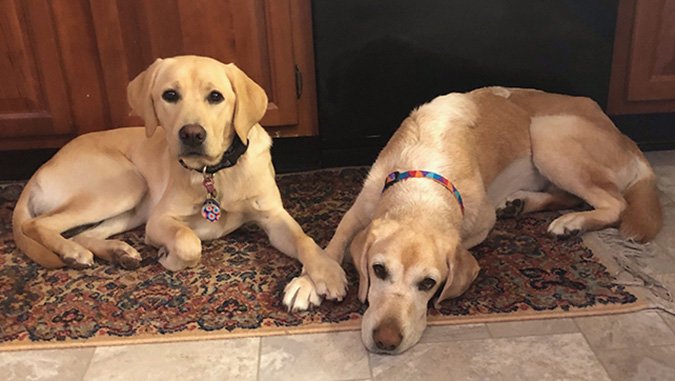 Nutmeg, right, with her sibling puppy.

Pet parent Jane had to euthanize her beloved dog Nutmeg after a battle with a cancerous tumor, but wanted to share her story because having pet insurance gave her precious extra months with her pal.

Nutmeg was a sweet, quirky Labrador retriever, and small at only 45 pounds. She loved normal lab activities such as swimming, tracking, and cuddling with Jane.

At six years old, Nutmeg was also quite the athlete – ranking in the top 25 Labradors in the country in agility competitions in 2020.

She proved to be an amiable pack member, stepping into the big dog shoes surprisingly well after Jane lost another dog, Sally, last March. And she was the best big sister ever since Jane adopted a new Labrador puppy in January.

One day in April, Nutmeg did not seem herself. Jane took her to the veterinarian, and he discovered a mass in her intestine area. The needle aspirate indicated a malignant tumor, probably a sarcoma, which is a type of cancer that starts in the bones, organs, or skin.

The vet scheduled her for surgery to remove the mass. Jane was told it was a tricky surgery, with such a large mass, and Nutmeg may not survive it.

“It was so scary, dropping her off for surgery and not knowing if I would ever see her sweet face again,” Jane said. 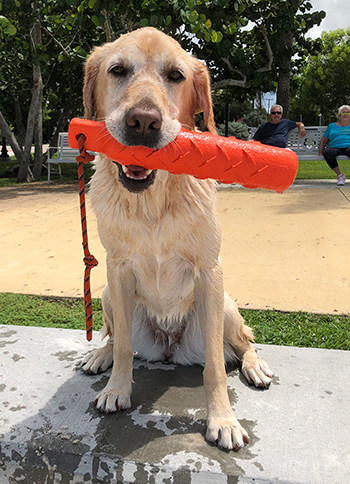 While the surgery was successful, her trial continued. Nutmeg reacted badly to an antibiotic in the week following the surgery. Once the vet treated her for the bad reaction, she rebounded and her health improved, Jane said. She has gained weight and returned almost to her normal self.

“She still has some gastrointestinal issues we are working on, and I don’t know her long-term prognosis,” Jane said at the time.  “But by all accounts, she shouldn’t be with me today, so I will enjoy her for every moment we are together.  We will try and do all the things she loves to do and hope that veterinary medicine gives us more time.”

Nutmeg had started chemotherapy to beat back the cancer further and it helped for a while. Nutmeg handled it like a champ and was eating and playing, Jane said.

“She will have to be on a special diet for the rest of her life and have pancreatic enzymes added to her meals to help her digest her food, but she’s alive and thriving,” Jane said in June. “I don’t know yet what the future holds for Nutmeg, but I cherish each day with her and am so thankful I insured her as a young puppy.”

Without Healthy Paws pet insurance, Jane said Nutmeg would have not had lived past her diagnosis in April. She first signed up for pet insurance with her dog Sally, who also suffered from cancer. She decided it was essential after a previous dog had expensive elbow surgery, which she paid for.

“I simply could not have paid for all this, the reimbursement from this incident so far has exceeded her premiums for her entire life. Healthy Paws processed my claims pretty quickly, considering the size, and also sent an email checking up on her. Healthy Paws is the reason she lived an extra two months,” she said.

After a recent check-up where the veterinarian found that a new tumor had developed, Jane decided it was best to help her furry friend over the rainbow bridge to end the suffering. Rest In Peace, sweet Nutmeg.

Protect your pets from those unexpected illnesses, including cancer, with no limits on payouts. Get a quote and make sure you’re covered for those dog and puppy mishaps and unpleasant surprises.