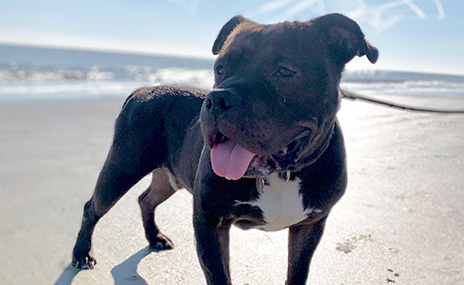 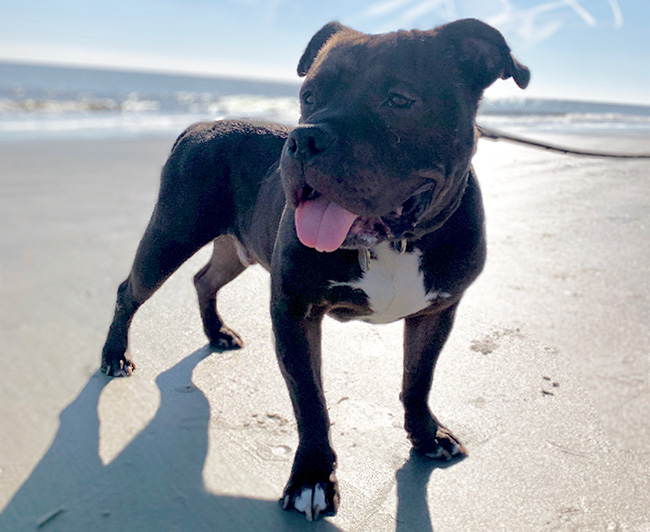 Prince is a 7-year-old rescued Pitbull terrier who is friendly and gentle to everyone he meets, especially children.

“He gets concerned if he hears children crying on the street,” said pet parents Matt and Erin. “Most of the time, he’s a couch potato that loves cuddles on the couch but when it’s time for a walk, he turns into a goofball that likes to spin in circles, roll around in the grass, and play with sticks.”

In March, Prince suffered acute renal (kidney) failure that came on quickly, Matt said. He started vomiting multiple times and had black, loose stool, so his pet parents rushed him to the vet. He stayed overnight in emergency care on IV medications and, after a positive report the next morning, Matt and Erin expected to bring him home that day.

Then, the veterinarian called and said Prince had taken a turn for the worse and needed dialysis as soon as possible. After checking with Healthy Paws that dialysis would be covered, Matt and Erin drove two hours to Purdue University, the nearest veterinary hospital that was open and could perform dialysis, so Prince could get treatment the next day.

The expected one to two weeks of care and supervision at Purdue stretched into a full month, which included additional treatment to fight an infection that was discovered during his stay.

Finally, his pet parents were able to bring him home where he started to thrive once again.

“He made the biggest jump in recovery when we finally got him home where he was comfortable enough to relax, take his medicine with normal meals, and put on most of the weight he lost,” Matt said.

It took a few months, but Prince’s energy level returned. He’s now doing great with a prescription kidney diet with phosphorous and potassium binders and medication to manage the infection.

“Although managing his conditions takes extra work, seeing his tail wag all day makes it worth it. We are incredibly grateful for the help and support from Healthy Paws,” Matt said.

Matt said he and Erin initially decided to enroll in pet insurance because bully breeds have a tendency to develop serious hip problems, and they wanted coverage for serious injuries such as torn ligaments. While it was an unexpected condition that racked up the vet bills, they are very glad they enrolled.