In November 2017, the Healthy Paws Foundation announced the grant program, The Healthy Paws Rescue Race, supported through our “every quote gives hope” program. After six selected animal welfare organizations “raced” to the finish line, the foundation gave $50,000 total in grants. The top receiver of votes won $20,000, second place won $10,000 and four finalists each took home $5,000. Provided below is the story of finalist Copper Country Humane Society.

Copper Country Humane Society (CCHS) is a no-kill shelter in the rural Upper Peninsula of Michigan. The organization takes in strays, surrenders and seized animals from the three surrounding counties and tribal community. If and when their numbers are low, CCHS steps it up and assists other shelters in Michigan state and further south.

Founded in 1972, CCHS joined forces 22 years later with Keweenaw Animal Alliance (KAA) to form one organization to better serve the community and animals; it is now known as the Copper Country Humane Society. The primary mission of CCHS is to operate a “no time limits” shelter for domestic (non-feral) dogs and cats from Keweenaw, Houghton, and Baraga Counties and the Keweenaw Bay Indian Community in accordance with the guidelines set by the Michigan Department of Agriculture. The shelter receives animals from animal control and private citizens.

When they were first starting out, less than 100 animals were cared for at the shelter annually, but CCHS has quickly grown and now cares for approximately 900 cats and dogs annually with a 90% adoption rate. Because of this growth, in 2005, CCHS opened the doors to a new animal shelter after three years of fundraising, planning and subsequent construction. The new facility exhibits brightly colored walls, clean, spacious kennels, and a larger play area, allowing CCHS to help more animals and invite in the community as volunteers and future adopters. 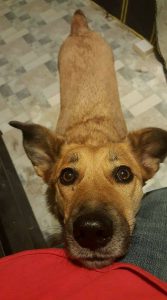 One such adoption sticks out in CCHS’s Manager, Beck Clouthier’s memory. “June came to CCHS with one of the many transfer groups that we accept from other shelters that lack the space for all of the dogs they receive on a daily basis. She had been rescued by a shelter in Oklahoma after being found on a property with three deceased and one other living dog. They were both starved, emaciated, and close to death.”

“The other dog sadly did not make the first night, and June’s organs were shutting down from lack of nutrition. She underwent intensive care at the emergency vet and there was even a court hearing that revealed June’s previous owner had thrown her out a window and slammed her tail in a door, giving her some laceration scars and a need for partial amputation of her tail,” Ms. Clouthier continues. “Thankfully, she pulled through and is an absolutely wonderful and spunky addition to my family. I fell in love with her the second I met her and, even though I was not looking for another dog, I simply couldn’t resist that sweet face. Her new name is Morgan and she absolutely loves my other dogs and the small-town life.” CCHS strives to find these happy endings every day – not just for families, but for the pet’s welfare and happiness too.

“Our passion is to save as many lives as possible,” says Ms. Clouthier. “We’ll be using the grant money for life saving endeavors, such as urgent medical care or taking in dogs and cats that have run out of time in a different shelter.” You can further support CCHS by donating through their wish list, make a tax deductible financial donation, or volunteer.

Visit the Healthy Paws Rescue Race page to learn more about the other participating organizations that qualified for grants in 2017, and check back here on the blog to read about each organization!