Rue the Dog is Thriving with Life-Changing Allergy Shots 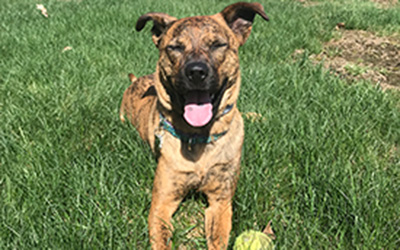 Rue, a mixed-breed puppy, was abandoned at a shelter in South Carolina when she was only six weeks old, so perhaps because she was separated from her mother and siblings so young, she is an extremely sensitive dog, said pet parent Michaella.

“She is very nervous and worries all the time. When she isn’t feeling well, you can tell immediately. She is extra careful and cautious, if she leaves the couch or her bed. The only place she has not a care in the world is running wild through the woods!” Michaella wrote.

When Michaella adopted Rue at 10 weeks old, she had terrible ear infections. It took about three months to clear them up. The typical causes of ear infections such as yeast or bacteria were not present so it required some trial and error to resolve.

Besides the ear infections, other problems started popping up that indicated Rue might have a chronic skin condition. She had chewed and licked her back legs so badly that she was missing a lot of hair. When she turned about six months old, some bald patches appeared out of nowhere on her face. Most of the hair loss cleared up with a little bit of treatment, so Michaella didn’t suspect allergies at the time.

But when spring arrived and everything started blooming, Rue really started feeling miserable.

Michaella tried lots of different foods to see if it was a food allergy. Things didn’t improve and Rue wasn’t even interested in playing in the woods outside. Michaella finally decided to do allergy testing to pin down the culprit.

The results showed that it was not food allergies but she was allergic to every tree, grass and type of pollen. Michaella tried daily medication, which brought little to no relief. But then she switched to monthly allergy injections which finally gave Rue the relief she needed.

“Rue is amazing! With her allergies under control, she has one less thing she needs to worry about in this big wide world. The itching being under control is life-saving. She wasn’t herself or interested in doing anything when she was itchy. It is so exciting and makes me so happy we are able to enjoy our outdoor adventures,” she said.

Also having to go the vet every four weeks has helped Rue learn that the vet isn’t a scary place. She doesn’t mind the quick poke because she gets to hang out with her friends.

Besides the shots, Michaella takes a few other precautions to ease symptoms. She wipes Rue down after a romp outside to avoid prolonged topical exposure. She also has central air conditioning, so during especially bad blooms, she can close windows and prevent allergens from coming into the house as much as possible.

Before she adopted Rue, Michaella had heard about pet insurance from friends, and she decided to get it for her own fur baby because she knew puppies are prone to worms and getting into accidents. She didn’t expect to see such a serious condition so early in her dog’s life, but having insurance helped her get Rue the testing and treatment that she needed.

Skin conditions in dogs are common and are the second on the list of causes for pet parents to file claims for dogs with Healthy Paws.