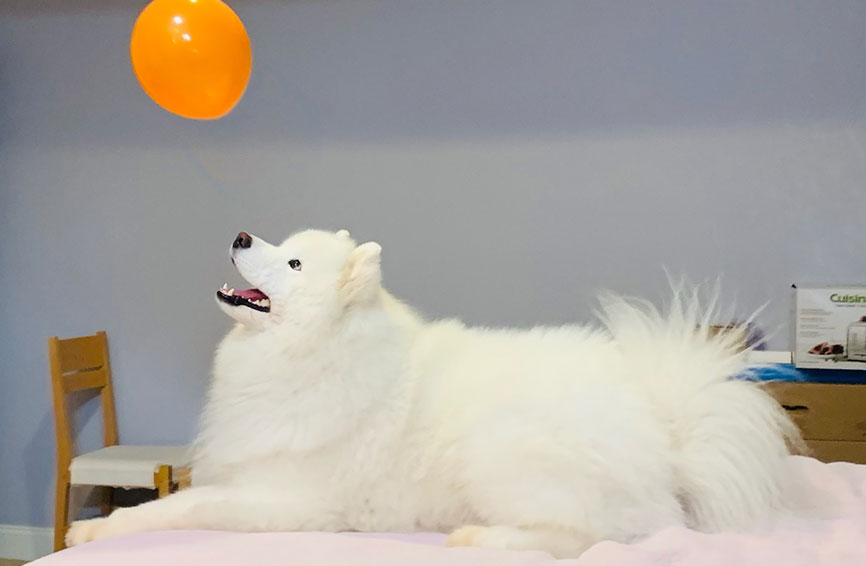 Sometimes, it’s not the common health issues that pet parents expect with dogs – stomach troubles, allergies, broken bones, or torn ligaments – but the thing that they never saw coming. That was the case with Winter, a beautiful 60-pound Samoyed who came down with a rare but treatable condition.

Winter, who got her name from her long, luxurious white coat, has been a loving, devoted, and super-friendly companion to pet parent Paul and his family. She had been healthy since her adoption as a puppy four years ago, but then suddenly Paul noticed there were inexplicable puddles of urine throughout the house in Ashburn, Virginia.

“At first, we thought maybe it was from our friend’s dogs that were marking the house when they came over, but after cleaning up all the puddles and with no other pets in our home, the puddles would reappear,” Paul said.

Thus began a painful journey for Paul and his family, figuring out what was wrong with Winter. At first, they thought it must be a urinary tract infection (UTI), a common condition that can usually be cleared up with antibiotics. UTIs are typically found in middle-aged female dogs but can appear at any time in a dog’s life.

The vet treated her for a UTI, but the urinary incontinence continued. Then a new symptom emerged – Winter’s appetite waned, and the family could not get her to eat anything.

“As she became more lethargic, panic really set in, and we made repeated visits to the emergency vet where they continued to assume it was a UTI,” Paul said.

A correct diagnosis of Faconi syndrome

Finally, a vet said she should remain overnight so an internist could evaluate her. Thankfully, that specialist diagnosed her correctly with a rare ailment known as Faconi syndrome, where there is an abnormal function in part of the kidneys. If left untreated, it can lead to kidney failure.

The internist took the time to research all the symptoms. By ruling out Winter’s treatments, they used diagnostic testing and blood lab results to identify Faconi syndrome as the primary cause of her distress.

With the proper diagnosis, the vets started Winter on the correct medications to begin her recovery.

After three months, she had nearly fully recovered. She remains on minimal medication, and the vets monitor her blood labs until they can be sure she has healed completely. Dogs who recover from Faconi syndrome generally live a nearly normal life span.

“She is doing fantastic – full of energy, wants to play, and is just as loving and devoted as ever,” Paul said.

Before this incident, Paul was not sure he had made the right decision to buy pet insurance.

“Over the first four years, Winter’s health was fantastic, and I started to wonder if pet insurance was actually worth the cost since my routine check-ups would never meet the deductible nor necessitate ever having to file a claim,” Paul said.

With the onset of Faconi syndrome, Paul was grateful that he had a Healthy Paws policy on Winter. All the vet visits, lab tests, and medication amounted to more than $7,000. And he has been impressed with the customer service and quick claim processing time.

“Throughout this entire ordeal, Healthy Paws has been absolutely amazing. The online portal makes submitting claims so easy and setting up a direct deposit to my bank makes reimbursement checks a thing of the past. Whenever I do have to call in to clarify a question or respond to a claim question, the staff have been professional, kind, patient and understanding. Their empathy is comforting because you know you are speaking with someone that really cares about our pet. The notification process regarding the status of your claim is immediate and the turnaround time to process is unbelievable. My most recent claim was submitted in the afternoon and the payment was processed for deposit that evening,” he said.

Before Winter joined their family in July 2017, Paul had spoken with friends with dogs and inquired if they thought pet insurance was worthwhile. Without question, most supported the idea of having pet insurance, so he thoroughly researched all the various options in the market.

“Each level of research always put Healthy Paws in the top 5 if not ranked #1, so I made the easy choice of enrolling Winter with Healthy Paws. I liked that there were no caps on coverage too,” he said.