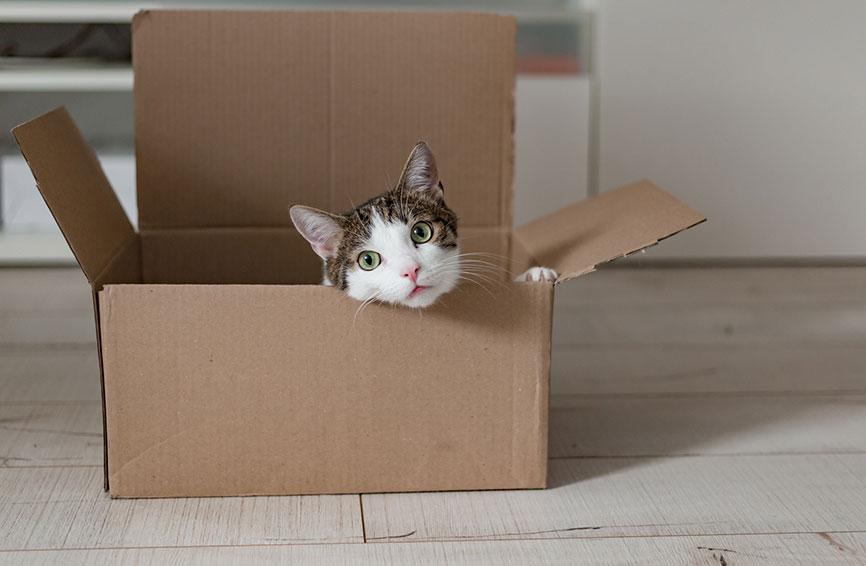 Most cat parents are well aware of the “If I fits, I sits” phenomena of cats love for sitting in boxes, or similarly shaped objects such as laundry baskets, drawers, bags, or other containers.

There was a recent viral story about a couple in Canada who were “unable” to use their new Vitamix blender because their three cats took turns sitting on the box it came in – for a month.

But would this tendency translate to a two-dimensional square shape, such as tape applied to the floor in the shape of a square?

Now scientists have studied the practice and have concluded that cats do prefer to sit in square shapes, even if it’s an illusion. The limited study, which appeared in Applied Animal Behavior Science, relied on citizen scientists, aka cat parents, to gather data.

“Cats are funny, cats are weird and quirky, and we love them for it. And that makes them hard to study in some ways, because we are often so reliant on training paradigms and cats aren’t very motivated to be trained,”  Gabriella Smith, the lead researcher on the study, told NPR.

Kits were sent to 30 cat parents to test the hypothesis at home, then they observed and video recorded their cat’s behavior over six days. The volunteers wore sunglasses to avoid inadvertently giving the cats any signals with their eyes.

The cat parents used tape to create squares on the floor and also pieces that look like four Pac- Man shapes that create the appearance of a square, known as a Kanizsa square illusion. Other randomized non-square shapes were also used for comparison.

Most of the cats chose to sit in at least one shape by sitting with all four legs within the lines (imaginary or otherwise) for at least three seconds. The study revealed that cats selected the Kanizsa illusion just as often as the square, indicating that cats may treat the illusion of contours as if they were real shapes. Most chose either the square and the illusion shape more often than the non-square shapes.

The question of why cats love boxes remains

The study didn’t conclude why cats seem compelled to sit inside boxes. Two informal theories are that cats crave a comforting pressure on their bodies that reminds them of when they were kittens, surrounded by their littermates. Another is that cats are attracted to potential hiding spots because of how they ambush prey while hunting, according to NPR.

However, those theories don’t explain why a cat will sit inside a square shape on the floor with masking tape.

When it comes to cats, maybe we’re just better off pondering the mysteries of why they do the delightful things they do and enjoy the ride.

Whether your cat prefers squares, circles or other shapes, make sure they are covered from those unexpected illnesses or injuries with no limits on payouts. Get a quote and make sure you’re covered for those cat and kitten mishaps and unpleasant surprises.