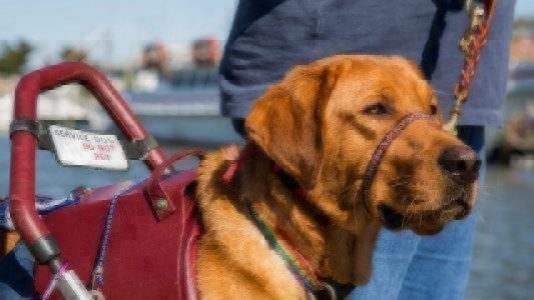 There’s no doubt about it…it’s a good time to be a dog! In our not-so-distant past, canines were often confined to solitude in a doghouse or yard, but today’s hounds do more traveling with their owners than before. Now more than ever, animals are accepted, even welcomed, in public due to an increased awareness of the bond they share with their human companions. In fact, a new classification of dog, Emotional Support Animal or ESA, came about as a result of the real difference a relationship with a pet can make in the life of someone suffering from a physical or mental disability. While both service dogs and emotional support dogs are entitled to certain rights that come with their titles, there are important differences to note between the two.

Service dogs not only assist people with hearing or visual impairment, but also perform an array of specific tasks for their owners. They can be trained to work with people who use a wheelchair, have balance issues, suffer from autism, seizure disorders, or a number of other conditions. These special dogs can be trained to retrieve dropped objects, open and close doors, or even bark to indicate help is needed, and these trained behaviors can vary widely within the service dog classification, depending upon the needs of the dog’s owner. Service dog vests are usually worn by these animals to help identify them as an extension of the handler and to prevent people from petting them, but they’re not required! Please Don’t Pet Me says: “Federal law, The Americans with Disabilities Act, does not require any special identification of service animals. Some service dogs need special equipment to perform their jobs correctly, while others do not.”

Rights of Service Dogs and ESAs

While the definitions of service dogs and emotional support dogs are different, both types of animals are treated similarly when it comes to their public rights, but there are a few key points of differentiation:

So while there are some key differences between a service dog and an emotional support animal, there are certain rights that owners of each are entitled to. These animals serve different functions in the lives of their owners, but the jobs they perform are equally important to the people they help each and every day.

Min S. Lee is the Senior VP of Business Development for CertaPet.com, a telehealth company. CertaPet is the leader in providing emotional support animal letters by internally connecting patients with licensed mental health professionals. Get your ESA letter at CertaPet.com.