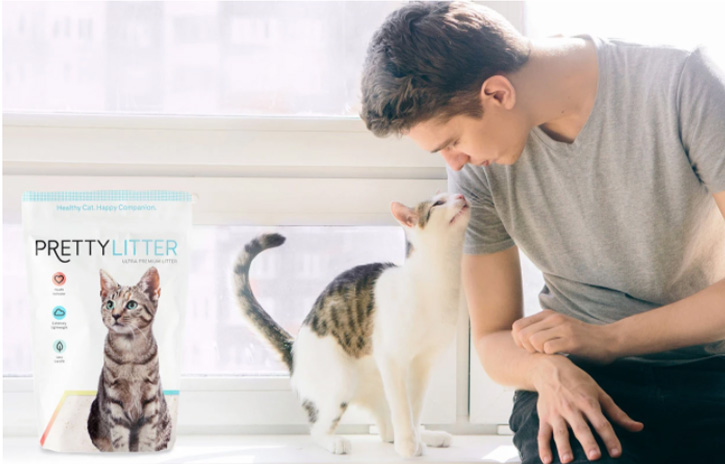 Imagine being able to tell if your cat might have a urinary tract infection (UTI) or bladder issue by simply looking at her litter after she takes care of business.

That’s the claim of a new kind of kitty litter garnering a lot of buzz in recent months. PrettyLitter is a silica gel crystal-based litter that is said to be 80 percent lighter, more absorbent, and less-clumping than traditional litters. That all leads to less cat waste smell, the company claims.

But the real game-changer is that the company says the product is “the world’s smartest cat litter” and that it will change color if your cat urinates and has a health problem related to elimination.

It’s a tool that could alert a cat parent to contact their veterinarian for further examination and head off a more serious issue. It would also prompt quicker treatment, reduce the amount of discomfort the kitty might experience, or even help them avoid pain altogether.

According to PrettyLitter’s website, the color of the litter after peeing can indicate different problems. For example, blue would indicate a high alkaline or pH level, pointing to a possible UTI or bladder stones. If the color turns red, it could also mean blood in the urine and bladder inflammation.

According to Healthy Paws Cost of Care report, UTI’s were the second most common issue that brought cat parents to the vet in 2019.

What do veterinarians think of PrettyLitter?

“I would recommend cat parents try this product. The science behind it seems to make sense, as a compound in silicone can show differences in acidity and alkaline levels, which may be indicators of urinary tract infections or other abnormalities,” he said.

Some of his patients who have used it say that it is non-clumping, easier to clean, and non-allergenic to humans, as the company advertises.

Dr. Zac says it would be best to treat the litter as a tool, along with observations of changed cat behavior. If a pet parent notices changes in color in the litter, they should note any other potential symptoms the cat may be experiencing, such as eliminating outside the litter box, which can point to a lower urinary tract issue. Then consult with your veterinarian, perhaps over video initially, to see if the combination of changes warrants further medical evaluation.

“This is where vet telemedicine can be quite useful – you can bring a veterinarian right into your home to see what you are seeing. Then the veterinarian can use that insight to help advise on next steps – specifically whether the situation can be diagnosed remotely or if the cat needs to be brought to a vet’s office for further evaluation and treatment,” he said.

The Healthy Paws Plan does not cover a telemedicine appointment, but any subsequent in-person veterinary diagnosis or treatment of any urinary tract or bladder illnesses would be eligible for coverage, as long as they are not pre-existing conditions.

Dr. Zac said the only negatives he may see with the product is that a handful of cats that prefer consistency are used to the texture of regular cat litter so they may not know what to think of it at first. The silicone particles also have a tendency to stick to a cat’s fur, more than traditional litter, a few of his clients report. If the cat accidentally consumes a bit of silica gel crystals, the company said it will not harm them.

How to buy PrettyLitter

PrettyLitter may only be purchased online, and it operates on a subscription model. Pet parents sign up on their website to have a new bag shipped once a month. The cost for one cat is $22 a month. To stop the shipments, the customer needs to unsubscribe. The Healthy Paws Plan does not cover the cost of kitty litter, no matter how beneficial it might be.

The company says the litter lasts longer because of its absorption qualities and that less is needed to do the same job as traditional litter. And, getting the litter delivered may save a trip to the store in a time when many people are trying to minimize shopping in person.

What are people saying about PrettyLitter?

Overall, the reviews of PrettyLitter by cat parents are quite glowing. A few customers complained about having trouble canceling their subscription, but the company responded quickly to them and seemed to resolve the issues.

A sample review on the Better Business Bureau site reads: “I love this litter! And more importantly, my cats love this litter. The fact that it also gives me information about my cats’ health is great, but even without that benefit, this would still be our (me and my cats’) favorite choice. I like it because it neutralizes odors and zaps even the messiest poops until they turn into dehydrated tootsie rolls, so scooping the litter box feels a whole lot less like I’m diving into a dust bowl of toxic waste.”

PrettyLitter has been around since 2016 and has also been the subject of a lot of positive press reviews, including well-known publications and websites such as National Geographic, Forbes, and BuzzFeed. A report by the strategist column in New York magazine was especially glowing, calling it odor-free and “the best thing I bought in 2018.”

For $22, it sounds like it’s worth a try for any cat-loving human.

If you are someone who shops for the best available cat litter for your furry friend, you are a candidate for cat or kitten insurance.  Get a quote and make sure you’re covered in case your fancy cat litter indicates a health issue.