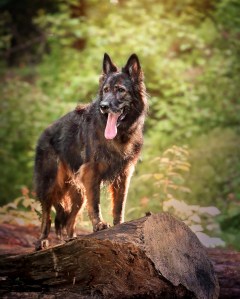 Heather has been pet parent to German Shepherd (GSD) Lupa for just about 9 years. “I’ve had her since she was just 9 weeks old, and over the years we’ve done a little of just about everything – hiking, swimming, agility, dock diving, lure coursing… and as she’s gotten older we’ve equally enjoyed quiet afternoons relaxing on the couch,” begins Heather. “She’s a happy, easy-going dog, loves balls and food in equal measure, and mostly tolerates her little sister, Quest, a three year old GSD who absolutely adores her.”

A few days before Christmas 2017, Heather noticed that Lupa was acting off – “in a hard-to-define way.” She was having difficulty eating and was lethargic; and “her eyes had a sunken look that I later learned was from dehydration,” says Heather. “She threw up some bile in the middle of the day, but ate her dinner that evening without throwing it up, so I wasn’t sure if that was an anomaly. She didn’t have a fever, she did have an appetite, she willingly ate and drank, and when we went outside she played.”

It was the next day that telltale symptoms of tetanus toxin exposure showed themselves: “her movements started to appear stiff, and I noticed her difficulty eating and drinking was because she wasn’t opening her mouth all the way, only cracking it a few inches. The bases of her ears were also stiff – at first I thought she had lost her hearing, but when I checked I found that she could still hear, but couldn’t swivel her ears to track sounds normally.”

Tetanus is caused by the clostridium tetani bacteria, and it can infect dogs much like it does humans: through an open cut or wound, usually from soil. It is a serious condition where the bacteria replicates, dies, and those cells act as a poison that block nerve signals and produce severe contraction of the muscles, lockjaw, and dehydration. It is not that common in pets, and most pet parents don’t know dogs and cats are at risk.

“I had no idea at that time that dogs could get tetanus, but even if I had known I would have had no reason to suspect that’s what it was – Lupa hadn’t had any injuries or surgeries that could have gotten infected,” says Heather.

The first sign that your dog has tetanus is usually a stiffening of the neck, jaw, and hind legs. As the poisoning progresses, the entire body can stiffen, spasm, and produce quite a bit of pain. Dogs have a natural resistance to the bacteria that produces tetanus, so symptoms can take weeks to appear and the initial wound can already be healed. These include: 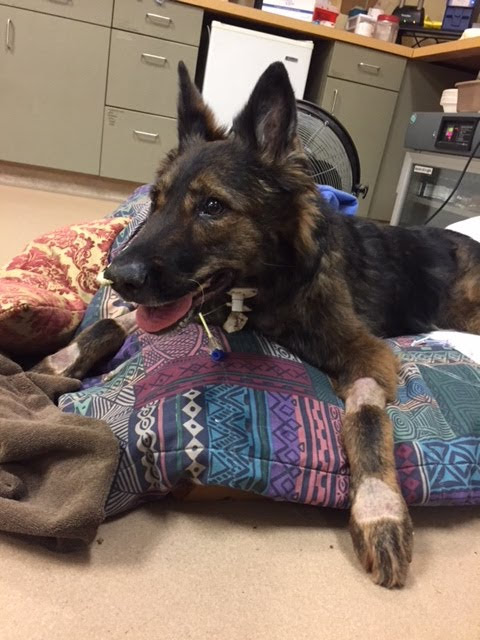 “We were extremely fortunate that our local ER has a neurology department – the vet looked at Lupa, watched some of the videos I had taken of her at home, and immediately diagnosed her with tetanus,” says Heather. After a series of tests (there is no tetanus-specific diagnostic, but vets still look for abnormalities in blood and urine and administer an electromyography, which records the electrical activity of the muscles), Lupa was admitted to the hospital and administered IV fluids, antibiotics, and tetanus antitoxin.

Vets recommend getting your pet to a pro as soon as you notice stiffening symptoms because the progression can be devastating, as the toxin may eventually spread to the rest of the muscles, and you will need the tetanus antitoxin. For Heather and Lupa, “I had gotten her to the vet just barely in time. Less than 24 hours later, the tetanus toxin that had already permeated the muscles of her entire body started causing convulsions,” she says. “The antitoxin eliminated the tetanus toxins that were in her blood, but there was nothing to be done about the toxins that had already bound to her nerves – the only way to get rid of those was to wait until the nerves themselves regenerated, a process which takes weeks.”

Treating tetanus includes stabilizing your dog with IV fluids and oxygen, medicating with the tetanus antitoxin, antibiotics, anticonvulsants and muscle relaxants, and possibly a strong sedative to keep your pup calm. Most dogs will need round-the-clock care, a feeding tube and ventilator, and hospitalization for at least 7 to 10 days.

Heather says that had Lupa still been at home, she would not have made it. “Her temperature skyrocketed to 108 degrees, she had to be put under anesthesia to stop the convulsions and rinsed with cool water for over an hour to bring her temperature back down.” Once she was stable with a lower temperature, she was transferred to a veterinary specialist and admitted to the Intensive Care Unit (ICU). “The vet was concerned that if the tetanus toxin had already gotten into her diaphragm, she wouldn’t be able to breathe and would need a ventilator, and the specialist was the closest office with a ventilator (and an hour away). Fortunately, she didn’t end up needing it, but the specialist office was much better equipped to handle the intensive level of care she needed anyway.” 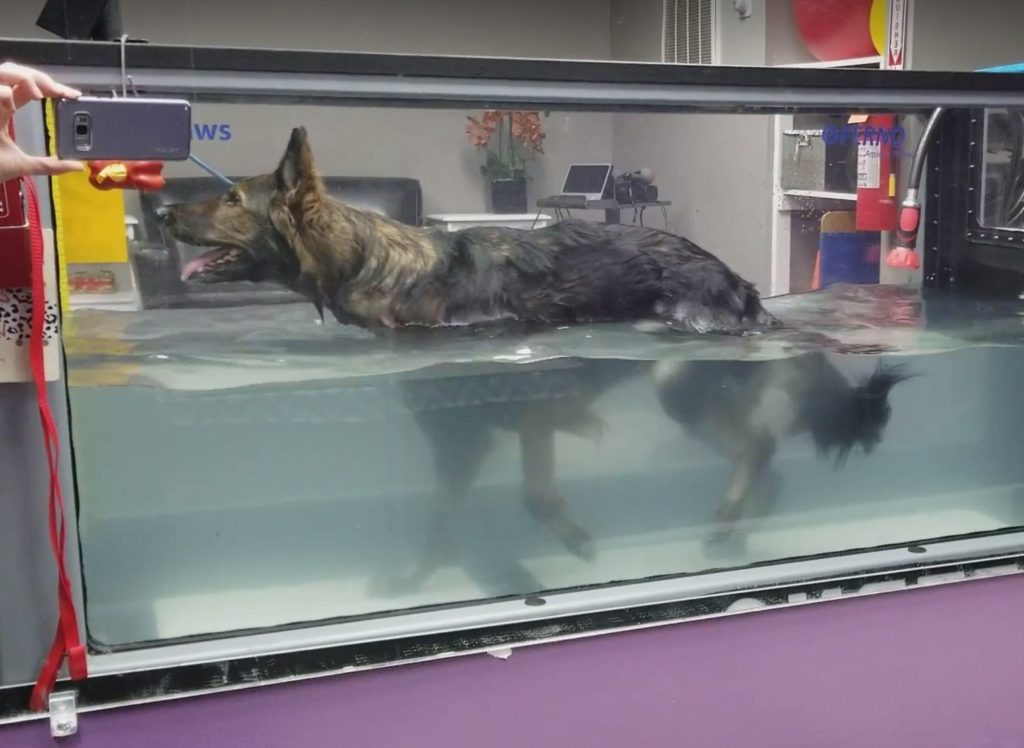 Lupa in the hydrotherapy tank

Lupa ended up staying in the ICU for almost 3 weeks. For the first 10 days, she was kept in an induced coma to prevent convulsions and had her own personal vet tech assigned to her to monitor vitals, maintain a half dozen IVs (fluids, antibiotics, anticonvulsants, and sedatives), keep Lupa clean, and do passive range of motion exercises for her legs and head. She developed pneumonia from her long bed rest and they had to switch her to different antibiotics to fight it. They kept her ears and eyes plugged and covered to reduce stimulation, and when she was finally able to come out of the coma without convulsing, she was then slowly weaned off the sedatives.

“Slowly, she started getting to eat real food, and started physical therapy to strengthen her muscles so she could walk again,” says Heather. During this time, she still suffered from violent twitching episodes while she was sleeping, which were believed to be possible seizure activity, so she was kept on anticonvulsants. “Other than that, her health continued to improve, and she finally came home almost 3 weeks after she had first been admitted to the ER.” 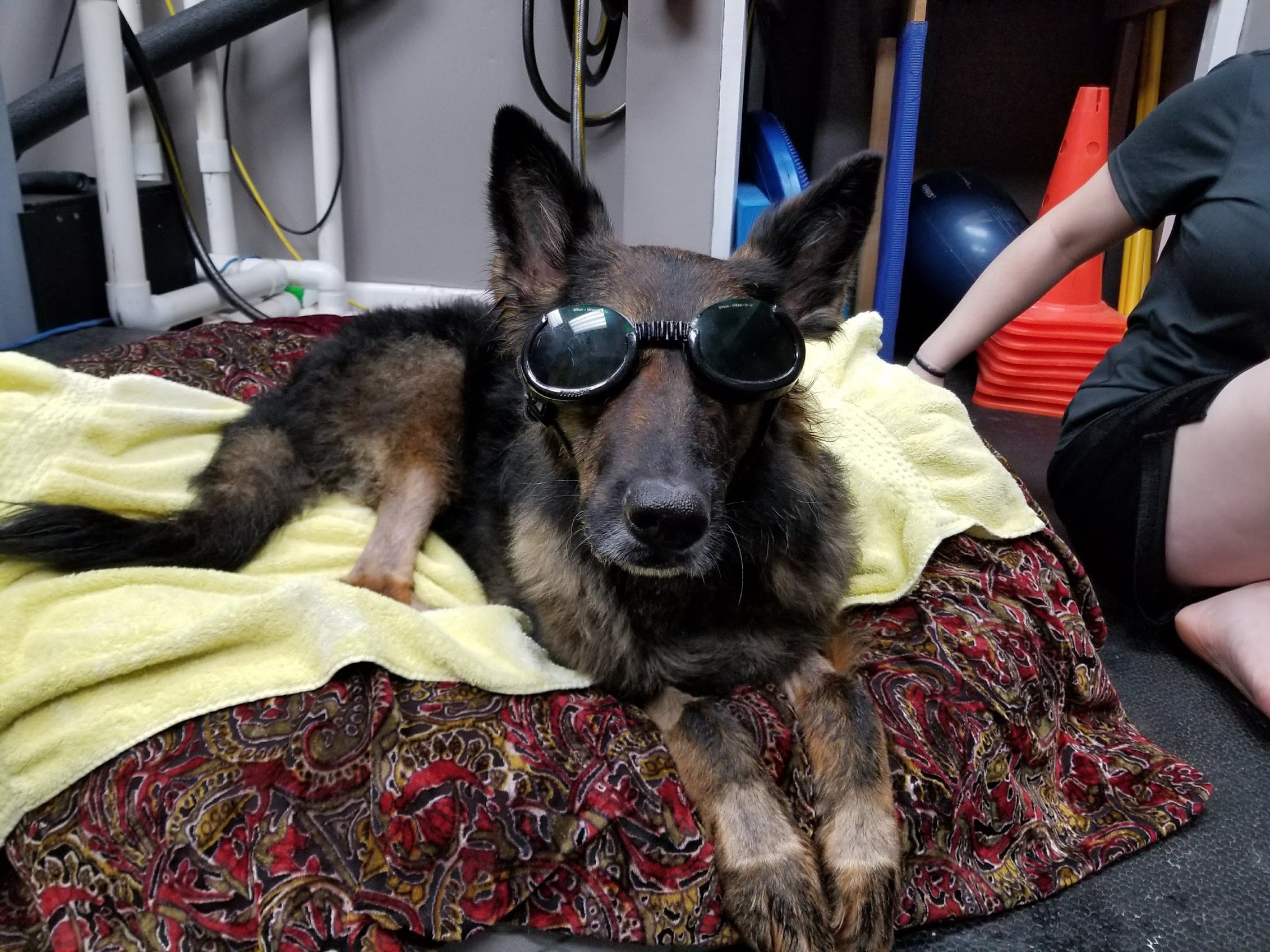 When a neurologist confirmed Lupa was no longer having seizures, she was weaned off the anticonvulsants and then began several months of physical therapy in order to rebuild her strength and agility. “She worked out on an underwater treadmill and got laser therapy for pain management three times a week for six weeks, then twice a week for about a month, then another month of once a week,” says Heather. “Progress was slow and she was constantly sore, but at the same time she was more alert and wanting to play, so we had to strike a balance between what her mind wanted to do and what her body could handle.”

Since December 2017, Lupa’s 18 claims for tetanus toxin exposure have totaled $52,021 and Healthy Paws has reimbursed Heather $46,569 (90% reimbursement rate; $250 deductible), which includes the initial emergency procedures and all follow-up care over those stressful months. “It was almost 5 months before Lupa was back to her normal self. Tetanus is always a serious disease, but her case was on the severe end of the spectrum, and her recovery was far from certain. Tetanus is so rare in dogs that most of the vets had never seen a case before, and relied a lot on whatever research they were able to find. But with the intensive care of a dedicated team of specialists and a lot of time, Lupa made a complete recovery.”

Tetanus is not a chronic condition, but rather an “occasional disease,” meaning it occurs once and will not reoccur unless your dog is exposed to the toxin again. By enrolling in pet insurance, the hospitalization, antitoxin and medical treatments will be covered up to 90%. Find out more by getting a free quote.