Tips For How to Find a Lost Dog Explained By Experts 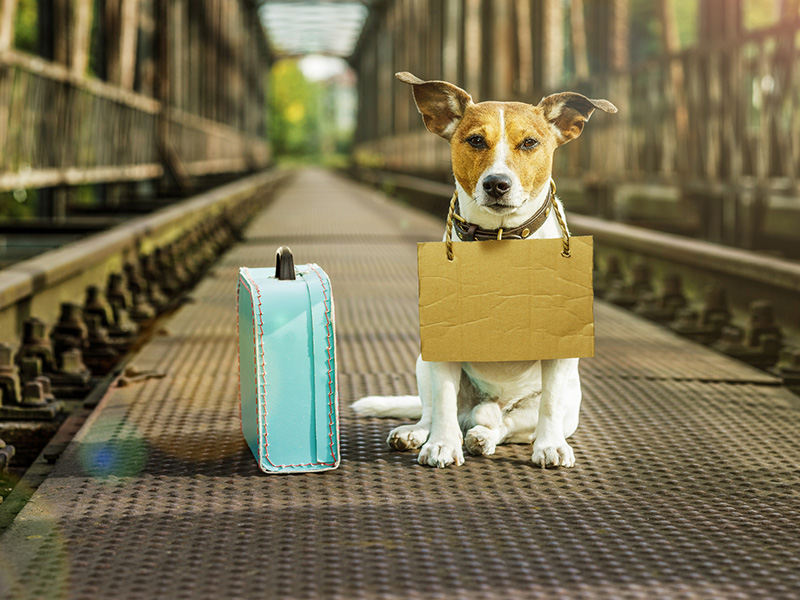 Pet parent Carl had the scare of his life this summer when his shepherd-border collie mix Mollie suddenly took off while he was visiting his brother in a wooded part of New York state.

One day Carl turned his back on Mollie in an open area and she was gone. Carl was surprised because usually Mollie stayed with him, even off leash, and always came when called.

He spent much of the next week looking for her to no avail. They asked neighbors if they had seen any sign of her, but no one had.

“For that whole week I was a mess ‘cause she was my baby – it was just her and I,” Carl wrote.

At the end of the week, Carl needed to return home to Pennsylvania, so he left with a heavy heart. But once he got home, his son insisted they go back and keep looking. The next day, they made up flyers and went door-to-door to ask if anyone had seen her. One woman said there had been a black dog hanging around another neighbor’s house.

Carl approached the house, which had a lane leading to a little farm. They went up the driveway and talked to the homeowner who confirmed she had seen a black dog on her property. She gave them permission to look around for Mollie.

Carl called for her, but there was no response. Then his son’s girlfriend spotted her at the end of the lane. Carl said “come baby” and she ran as fast as she could to get to him.

“Her tail was wagging so hard and she was crying and I was crying while I was hugging her. I never expected to see her again,” Carl said. Thankfully, Mollie was in good condition.

“Now she is back home and doing great. She does not take off like she used to. She is happy,” Carl said.

Carl did several things right in finding his lost dog, according to two experts who specialize in finding lost pets. He didn’t give up, he searched the area surrounding where she was last seen, and he talked to everyone in the area that he could.

Carl’s experience is not uncommon. In fact, more than ten million pets get lost each year, according to the American Animal Hospital Association (AAHA). And it’s not always the pet parents who lose the dog. A fair number are lost by pet sitters, boarding facilities and animal hospitals.

If it happens to you, don’t panic; be methodical and make a plan.

“The biggest problem we have when we lose a pet to us is that we temporarily lose our mind and use up valuable time doing the wrong things or we do things inefficiently because our nervous energy gets the best of us,” said Robert Smith, a founder of helpfindlostpets.com and a Missing Animal Response Technician. “Often finding your pet can be best handled by stepping back, making a plan, becoming organized, utilizing proper techniques, and attacking the situation logically.”

Before we offer tips, we want to acknowledge that prevention is obviously preferable to having to deploy these tactics. View some prevention tips here.

Tips for finding a lost dog

Tips provided by Annalisa Berns, pet detective and owner of Pet Search and Rescue, and Smith.

The first step is to try to get a confirmed sighting of your pet, preferably multiple sightings.

The first step will be to create flyers or posters. Not small black-and-white signs on regular paper though. The point is to get noticed.

“You want giant, eye-catching neon posters in high traffic areas. Or even billboards or banners,” Berns says. You can also put the posters in your car windows for more visibility.

You should include a large photo of your missing pet and a phone number. Other text is less important and should be minimized. Include “Shy – Do not chase!” if this is the case with your pet, Smith said.

Here are some ideas for creating a colorful, well-designed poster.

If your pet has been missing for a few hours, you’ll want to check with the local shelter or animal control department. The website Pawboost also has a database of lost pets by zip code, so that’s worth checking.

2. Pinpoint the area your dog is likely to be

The first 24 hours are crucial so you’ll want to act fast. The radius you will be searching depends on a variety of factors. Start with one to three miles. Identify greenspace areas such as golf courses, canyons, fields, schools, along freeways, railroad tracks, hiking trails, parks, open spaces and sometimes industrial areas and construction sites, Smith advises.

Besides posting your signs, use a high-powered spotlight at night to shine a beam in target areas. Smith said this technique is useful because the animals’ eyes will shine and reflect back.

3. Try to get a visual of your pet

Even if you’ve spread the word about your lost pet, seeing it for yourself will tell you it’s the right pet and help you narrow the search. You might be able to get a photo or video from a wildlife camera (see below). If you do see your pet but are afraid they might run, be patient and try to get them to come to you. Use some smelly food and wait for them to catch your scent.

Set up a feeding station with smelly bait such as sardines, baked chicken or a heated meal with safe ingredients for your pet. Place the food on a paper plate in the center of a layer of sand or flour so you will get a footprint. Re-bait the stations once a day, usually in the evening at the same time. The scent of the food will carry about 20-250 feet depending on wind. 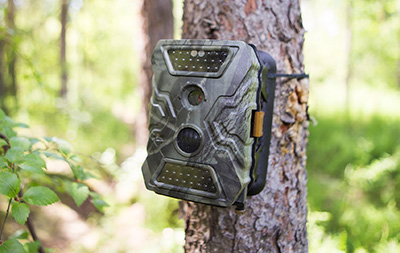 Wildlife or game cameras are now inexpensive enough to consider using one or more in your search. You’ll want to position the cameras in areas where your dog was sighted and pointing at a feeding station. Use a timestamp option on your camera and check the pictures frequently.

6. Use a humane trap or trapping service

Humane traps are like big dog crates, but with a trip plate that locks a pet inside safely. Before setting, test it completely, including the door when sprung to make sure it can’t be pushed open from the inside. Never leave a trap set and unsupervised for a long time. The trap should be placed on even ground away from people and cars. And have a wildlife camera trained on it.

If you’ve tried all these tactics with no luck, it may be time to call in an expert – either a pet detective or an animal behaviorist. Getting help could be anything from a phone consultation to hiring a pet detective to conduct a search with specially trained hounds.