Blog / Community / Pet News / War Veterans and Dogs: How They Help Each Other
Pet News

War Veterans and Dogs: How They Help Each Other 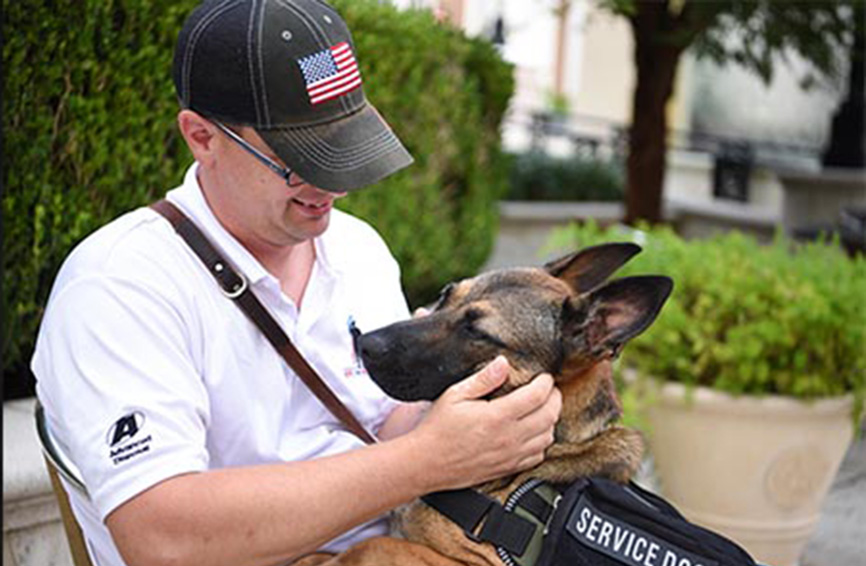 For Veteran’s Day 2020, we note two themes that have emerged in recent years – we know more than ever that returning military soldiers have often suffered physical and psychological damage that can linger for years or decades, and that pets are extremely helpful for people coping with trauma, depression and anxiety.

According to the U.S. Department of Veterans Affairs, Post Traumatic Stress Disorder (PTSD) affects more than 250,000 (30 percent) of war veterans returning since 2000, with an alarming 22 suicides per day reported.

Military members and veterans with a service dog displayed lower levels of anger and anxiety, better sleep, and increased wellbeing compared to those without a dog, according to the Human Animal Bond Research Institute.

To meet this need, a number of animal rescue groups have cropped up to tackle the dual issues of military trauma and homeless animals in a way that benefits both. The groups rescue shelter pets, mostly dogs, and train them to provide emotional support to returning military members. The veterans also participate in the training and rehabilitation of the dogs, giving them a sense of purpose.

“We like to say that every adoption saves two lives, that of a person and a pet,” says Pets for Patriots on their blog. The charity has orchestrated 3,141 veteran-pet adoptions to date.

A returning soldier named Rebecca who adopted a dog through K9s For Warriors described the impact the adoption of a dog named Bobbi had on her life.

“K9s For Warriors gave me back my confidence, and most importantly, my smile. It’s given me a reason to get out of bed, excited about facing my fears and challenging myself. I know Bobbi will always be there for me to lean on. It’s given me a reason to be grateful, instead of carrying around my usual grudge. It gives you a purpose and a responsibility, and of course, a battle buddy,” she wrote.

In honor of Veteran’s Day on Nov. 11, 2020, the Healthy Paws Foundation is donating a total of $15,000 to three rescue groups ($5,000 each) that unite military veterans with shelter dogs who help them cope with depression, stress, and PTSD. They are:

The Rescue Dogs Rescue Soldiers Sanctuary, based in Cherry Valley, N.Y., shares one story about how a dog and veteran are being rehabilitated together.

Gavin is an Air Force veteran who was coping with seizures, depression, PTSD, and other setbacks. As a case manager for children in the foster care system, he is a shoulder to lean on for many people.

Evie is a mixed-breed stray with a traumatic past that no one seemed to want. The staff of the sanctuary saw potential in her and took her in. Now she’s living at the sanctuary and training to become a certified service pet. Gavin came to the shelter one day where he met Evie. He was immediately taken with her, and they started training together. Soon, Evie will go to live with Gavin and his wife Tomisha.

The rescue furthers their good work for veterans and dogs by utilizing teenagers who are in juvenile detention to help train the dogs. That aspect of the program has been suspended because of COVID-19.

With donations also down as people have lost income during the pandemic, the donation couldn’t have come at a better time, said Liz Keller, the rescue’s Executive Director.

“It takes 6 months to a year to train a therapy dog, so this donation will go to training, and all the dog food, treats, and supplies needed in training,” she said. “We also help veterans who have dogs and can’t afford veterinary care. We don’t want someone already traumatized to lose their best friend because they can’t afford vet care.”

Want to help the Healthy Paws Foundation raise more money to help homeless pets? We make a donation anytime someone requests a quote or refers a friend who signs up for pet insurance.