What Do You Do When Your Pet Has Cancer? 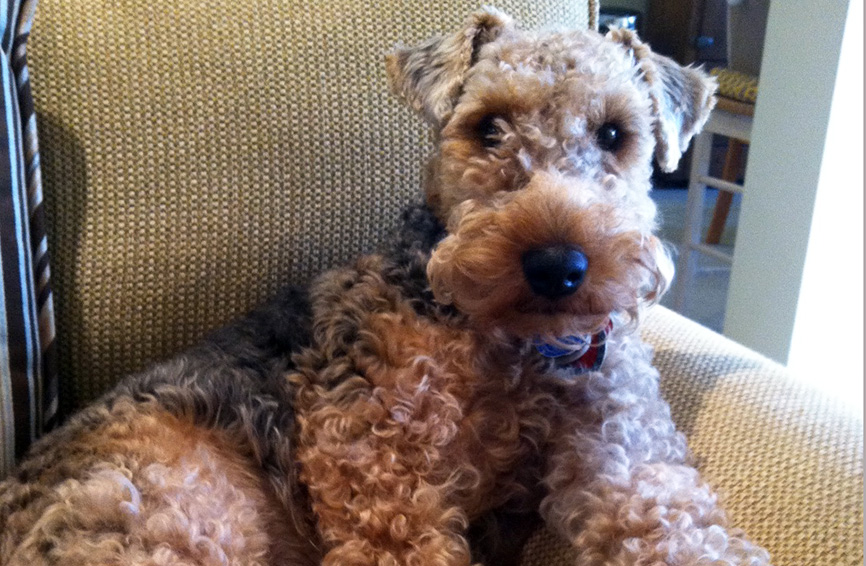 A longer version of this article was first published in Old Naples Living magazine.

Miss Kirbie is an 11-year-old Welsh Terrier and the whole world to CAT Tieger and her husband Elliott Brown, who live in Naples, Florida. “Kirbs”, as they sometimes call her, is a strong, joyful and loving companion and a therapy dog to Elliott.

In recent years, she’s been treated for Cushing’s disease, a malfunction of the adrenal glands; and pancreatitis, an inflammation of the pancreas. Miss Kirbie was diagnosed with lung cancer when under treatment for pancreatitis.

Here is a detailed account of Miss Kirbie’s medical treatment for lung cancer in 2019 and the decision-making process CAT and Elliott went through:

October 4 – Miss Kirbie seems to have another case of pancreatitis, an ongoing concern when a dog has Cushing’s disease, a problem when the adrenal glands produce too much cortisol.  Veterinarian Dr. Carin Corbo checks Kirbs for pancreatitis.  It is positive.  The same drill, as usual, is recommended, intravenous fluids and meds for the vomiting and diarrhea.  While there, Kirbs has a tiny coughing spell, which I raise concern about.  “I hope she doesn’t have cancer,” I said to Dr. Corbo.  She responded, “I can’t imagine, but she could have something caught in her throat.” We agree to do a chest X-ray at her follow-up appointment.

October 7—Back to the vet for follow-up.  Dr.  Ben Palmer, Kirbie’s primary vet, is on duty.  “She looks great,” he said, “I think the pancreatitis is resolved.”  He performs the chest X-ray to make sure nothing is stuck in her throat. Ten minutes later, he enters the exam room where Kirbs and I are waiting.  “Come back here, I want to show you something,” he said in a very calm voice.  As I walked to the X-ray room, I thought if this is a toy squeaker, how in the world do we get it out.  I’m standing, as he showed me the X-ray.   Dr. Palmer circled something on the film with a pen.  I looked at it for a few seconds and then said, “Is that what I think it is?”  Dr. Palmer replies “Yes, it’s a tumor in her lung.”

My world went upside down and so did my balance.  I had to sit down.  I felt faint.  I wasn’t expecting that.   Not lung cancer.  Not in a dog.  Not in our precious Kirbie.  God, help her, is all I could think.  Then, like with anyone, whether human or animal, the next question is ”why, and why her?”

A cancer survivor myself, I wasted no time between tears asking what’s next and can this be fixed?  Dr. Palmer said he did not see any metastatic involvement anywhere else in the lung if there was any good news to this. He also noted that lung cancer in dogs is very rare, less than 1% of all cancer.

What are our options?

October 10 – Three days later we are in the office of oncologist Dr. William Ratterree.

Dr. Carrie Kosarek and Dr. Ratterree, who are married, are the founders of Cancer Veterinary Centers, a state-of-the-art cancer center, which they started in 2016. My husband Elliott and I immediately felt confident in the entire operation.

Like Dr. Palmer, Dr. Ratterree believed it was likely a primary tumor, but to make certain, he recommended a full body scan of Miss Kirbie to determine if there were any tumors elsewhere in her body.  He agreed to do it that same day and also do a biopsy to see how bad it was.

Several hours later, we received some good news and some bad.  He found no other visible evidence of tumors or metastases.  The bad news…he couldn’t get a biopsy.  The tumor is too deep in her lung and is very near her aorta.  Next question: “Okay, what are our options?,” we inquired.  Dr. Ratterree responded calmly and compassionately: do nothing, highly targeted radiation therapy, or surgery to remove a lobe of the lung (lobectomy).

I had to ask him the most important question: “What would you do if this were your pet?”  He did not hesitate, “If it is operable, surgery would give her a much better chance of a prolonged life.  However, there are always risks and it is a big surgery.  I think you should have Miss Kirbie evaluated by a surgeon before you make a decision.”  I knew then we were dealing with a doctor who puts the best interests of his patient first.

Shortly after that visit, the final verdict from the body scan report came back.  There was a well-defined mass in the right lung lobe.  If nothing is done, she may have only a few months to live.   Elliott and I decide to meet with a surgeon, so we can make the best decision for Kirbs. 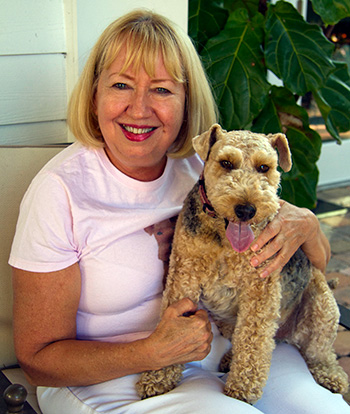 October 15 – Next stop, Dr. Christopher Potanas, a veterinary surgeon, who performs all types of surgeries, especially advanced orthopedic and oncology.

We liked him immediately.  When he talks about your pet, you know exactly why he got into the field.  He’s about making pets whole again, if possible, and quality and longevity of life.  After discussing the risks involved, the potential complications and the best outcome, we asked, “So what do you think?”  “There are risks involved in terms of where the tumor is,” he said. “Plus, at this point we don’t even know the type of cancer, but if we are successful and there are no complications, this will give Miss Kirbie her best chance.”

We asked Dr. Potanas how many of these surgeries he had done? Around 250 open-chest surgeries and between 50-60 lung surgeries, he responded.  We were not expecting that many, especially in terms of lung surgery.  “And what is your success rate?”, I asked. “I’ve never lost a patient,” he said humbly.

As we left, Dr. Potanas said, “Just know if you decide to do the surgery, she is your little girl now, but when she comes in here, she is mine for at least 72 hours.”  We were so touched by that and knew if we went forward with surgery, he was our guy.  I cried all the way home.

For the next few days we debated all the pros and cons.  Kirbs is only 10.  She’s not an old dog, but she does have other health problems.  Can she make it through surgery?  Radiation is less invasive, but what if it only gives her six months.  Plus, without knowing the type of cancer, it will be difficult to develop a treatment plan.  One decision was easy: Doing nothing was NOT an option.  Kirbs is too strong, too joyful, too loving to let her go without giving her the best chance.  We decide on surgery.

With her pancreatitis still flaring, we schedule surgery for October 21.  Dr. Palmer, Kirbs primary vet, and the staff at Animal Medical Hospital of Naples, where Kirbs has been a patient for almost 10 years, swing into action to get it cleared up before surgery.

October 21 – Up at 7 a.m. to get Kirbs to Dr. Potantas for surgery.  He will do an evaluation to determine if she is strong enough and his colleague will do a cardiac assessment to make sure a small heart murmur is not connected with any underlying cardiac disease.  Later in the day, he declares a “Go” for the surgery, and he and his team begin to prepare.

Of course, we had alerted every family member and friend and asked for prayers for our baby girl.  We were so grateful to everyone for all their support and love, including lots of Old Naples friends and neighbors.

The surgery lasted about two hours, as we sat patiently, but prayerfully, in the waiting room.  Finally, Dr. Potanas emerged and said it all went well with total removal of the lobe.  The tumor will be sent to pathology, which will determine whether further treatment is required, likely in the form of chemo.

Post-surgery – Kirbs came home three days later.  She kept us up all night with little grunts and whimpers until about 5:30 a.m. when she finally settled down and we all got about four hours of sleep.  Four days later, I didn’t like the way she looked so we rushed her back to the hospital.  As I suspected, pancreatitis had raised its ugly head again.  This time it was likely brought on by the anesthesia, according to the hospital.  Hospitalized again for pancreatitis, she gets the same treatment again, fluids and meds for nausea and diarrhea.   Sunday, October 27, she comes back home. 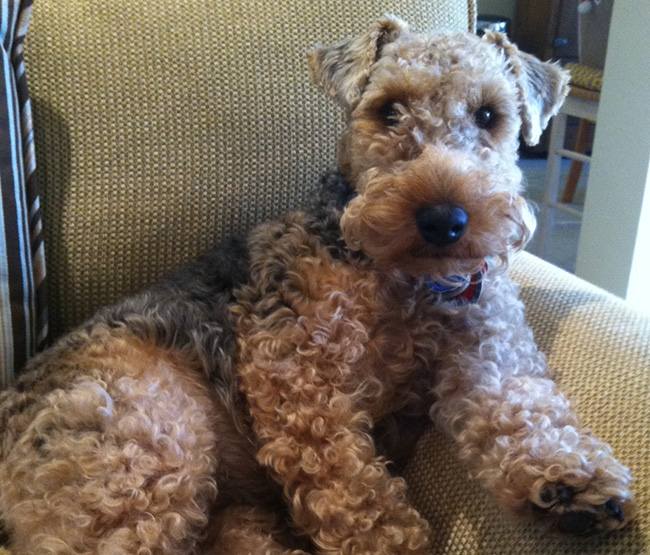 Now, nearly a year later, Kirbs is doing well, walking, eating, and even smiling again.  She is an amazing animal, so tough, brave, and resilient.  She is our “Tiny Warrior,” and we cherish each day we have with her.

Almost 50% of all dogs over 10 will get cancer, according to the American Veterinary Medical Association.  As for lung cancer, the incidence in both cats and dogs is very rare, and less than 1% for both.

I’ve written this for all pet parents to let you know what it is like when your pet is diagnosed with cancer and the decision-making process we went through.  Hopefully, you will never have to go through a situation like this, but should it happen, everyone’s decision will be different, given the type of cancer, whether it has spread, the pet’s age, and the costs involved.  Pet cancer is expensive, and we feel blessed to be able to afford the best care possible. We are incredibly fortunate to have such outstanding pet health care professionals in our community.   They did an amazing job of using their special skills, collaborating with one another in the best interests of Miss Kirbie, and giving us hope that she will be with us for years to come.

Pet insurance was a great investment

Having a policy with Healthy Paws Pet Insurance also made the cancer journey so much easier.  We were so fortunate to be able to go through this difficult experience and not have to think about the costs involved in assuring our little girl had the best care.  Healthy Paws covered 90 percent of the medical bills, minus a $200 deductible. We are so grateful and believe pet insurance is one of the best investments a pet parent can make.  You just never know when you need it, and when you do, it is invaluable.  In our case, it was life-saving.  High fives to everyone at Healthy Paws!

Protect your pets from a potential cancer diagnosis, which the Healthy Paws plan covers. Get a quote and make sure you’re covered for any future injuries or illnesses.