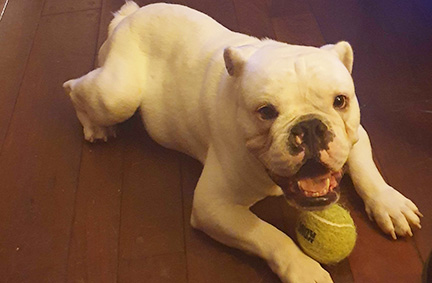 At one-year-old, Walter White looks like a normal bulldog and is healthy and happy. You would never know that he was born with a number of defects, most notably a fifth leg trailing behind him.

Walter was adopted by Andrew Ton, a dog lover with a soft spot for bulldogs, who has rescued several special needs dogs. The “Breaking Bad” namesake is probably the most unusual of his pets.

Walter is believed to have absorbed his twin in the womb and was born with five legs in addition to a mixed bag of organs, Ton said. He only has one kidney, but came with two extra intestines, and both male and female organs. Surgery has been performed to remove the fifth leg and extra intestines. He’s been spayed and neutered.

Walter was featured in a video from The Dodo, a company that makes lovable animal videos with a wide reach. In the video, which nearly 1.5 million people have viewed, the tiny puppy then known as Max Ellery is shown struggling to eat, walk and even open his eyes after he was taken in by Road Dogs and Rescue, a Southern California-based rescue that specializes in disabled bulldogs.

In his early weeks, his development was delayed as he dragged his fifth leg behind him, but eventually he grew into a pretty normal puppy and became beloved by the foster family and the other puppies in the household. The rescue group had his fifth leg surgically removed when it started rubbing against his other legs.

“He was just kind of on his own schedule,” said his foster mom in the video. 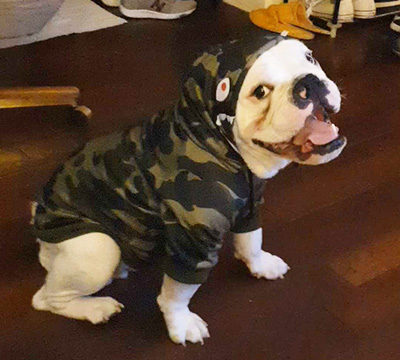 Walter’s condition is reminiscent of Narwhal, the so-called “unicorn puppy” that was found this past fall in Missouri with an extra tail growing on his face. He also “absorbed” another puppy in the womb, resulting in the oddly placed tail. His story also went viral.

Pets with disabilities or chronic medical conditions are often surrendered by their owners or are not adopted from their litter due to a desire for a perfect looking pet or concerns about taking care of them. Some animal rescues have formed specifically to keep these pets from being euthanized and help them find forever homes.

Ton, a new Healthy Paws customer, had arrived at the right time in his life to adopt a new bulldog after his last pet passed away. He saw the awkward puppy featured on the rescue’s website and his “heart just melted,” he said.His surgeries behind him, Walter is now perfectly healthy and moderately active, Ton said. His only special need is a raw food diet.

“Walter is the most well-behaved dog I’ve ever owned. He’s also much more active than your typical bulldog and loves playing tug-of-war and fetch. He has a great personality and is always up for an adventure. I’ve rescued other special needs dogs before but Walter has been the easiest so far by a large margin,” Ton said.

Walter’s YouTube fame had nothing to do with Ton becoming interested in adopting him, he said. He didn’t even know about it until a couple weeks after he adopted him. Ton said he’s not interested in keeping Walter in the spotlight.

“I’m happy with him just living a normal life,” he said.

Ton urges anyone looking to adopt to consider a special needs pet.

“Ultimately, they’re still dogs at heart and can be worked with and trained to live healthy and happy lives. Any dog can be a great pet, given the right environment,” he said.

He also said people should adopt from a rescue and avoid unscrupulous breeders. His last bulldog, George, was rescued from a puppy mill where the dogs were horribly mistreated. The poor pup was skittish around other humans and even after six years, George preferred to be alone most of the time.

Purchasing from such breeders only encourages the behavior, Ton said.

He also adopted Herra, an Australian Kelpie puppy, who had been hit by a car and was recovering from two broken legs. She had behavioral issues because of the accident.

“Ultimately, both dogs became great pets despite their issues, as the result of persistent work,” Ton said.