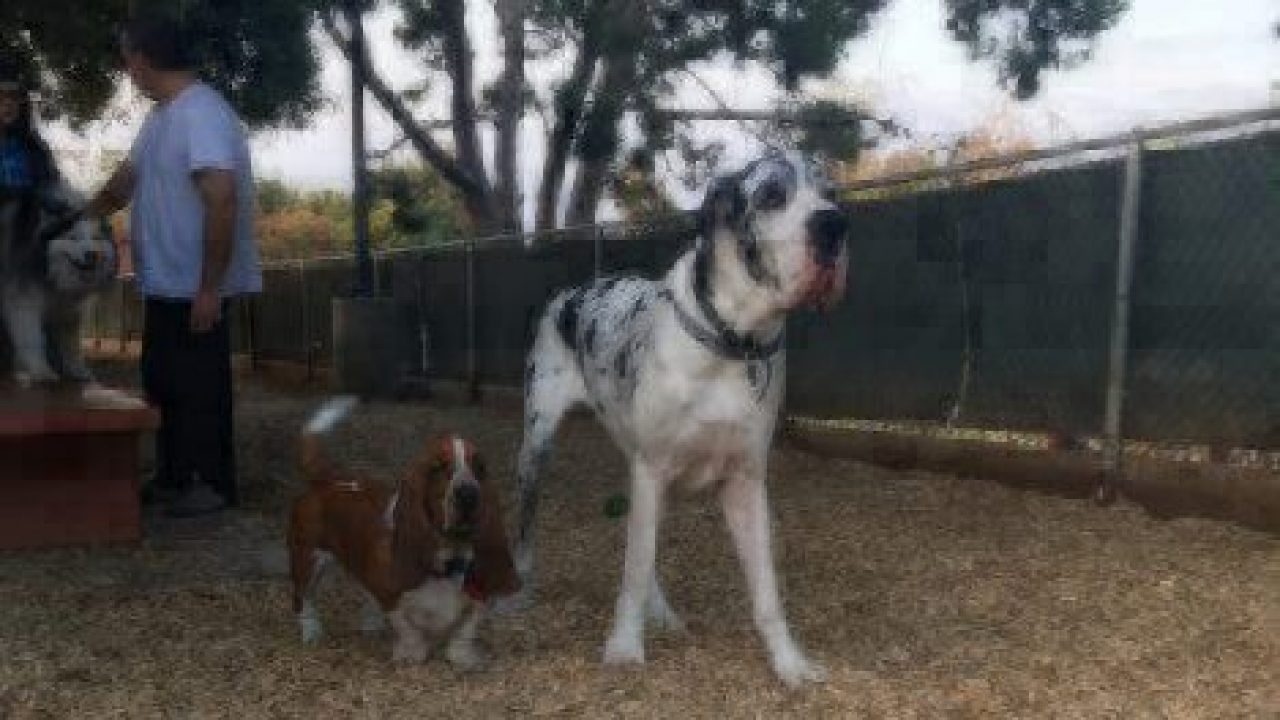 Got a big, busy f 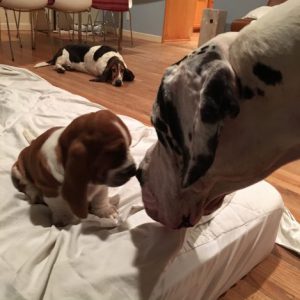 urry family? Many Healthy Paws pet parents have enrolled multiple pets, from partners-in-crime cat duos to a trio of Labs (one in each color!). One of our customers has two dogs enrolled with us: a Great Dane named Tank and a Basset Hound named Chubbers. Sweet but mischievous Chubbers has stayed true to his name – he’s clocked in two foreign body obstruction surgeries totaling around $12,000 – but Tank, he has been through the ringer. 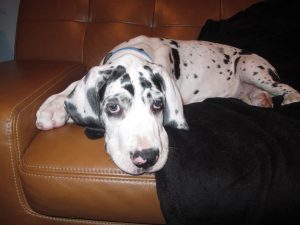 At four and a half months, John noticed that Tank was having trouble walking, specifically with his back legs. A visit to the vet lead to the diagnosis: Tank had compression of the spinal cord by the vertebrae in his neck area, consistent with Cervical Spondylomyelopathy (CSM), or Wobbler Syndrome – a disease of the cervical spine that is commonly seen in large and giant-breed dogs. It’s a condition usually in the neck, and the casual terminology “Wobbler Syndrome” is from the way a dog will walk when affected by the disease.

“We went in for surgery and it worked. But after Tank grew from a little puppy into his much bigger self, gaining 80lbs., he had the same issues, so we had a repeat surgery. Again, it was successful,” John explains. But when Tank’s back legs showed some of the symptoms once again, a MRI showed residual damage from the first instance of the disease. John and his family were stricken with concern; what could they do to help Tank’s quality of life?

The resolution would require constant management and care, and it wasn’t going to be easy or inexpensive – they went through chiropractic care and discovered laser therapy. They also began a regimen of acupuncture and various daily medicines to help with Tank’s spinal fluid, some of which are OTC and others that are prescription only, and covered by the Healthy Paws plan.

“He’s not agile like the other Great Danes at the dog park, but we’re out there every day and he’s doing great,” says John. “He’s just the best dog you could imagine! He’s incredibly loyal and follows me everywhere. We would do anything for him.”

Tank and his partner-in-crime, Chubbers have been back to their old tricks.

“The surgeries on both Tank and Chubbers have been incredibly expensive and Healthy Paws has never challenged one penny of any bill. [We often feel like] insurance companies in human medical care are not this easy to deal with, nor this prompt with payment,” John says. “The claims have always been paid within a week of filing. We tell our friends that to avoid any preexisting condition exclusions, get the policy as soon as you bring your puppy home.” To date, Healthy Paws has reimbursed John $39,085 for Tank’s claims that totaled $44,539, and $10,797 for Chubbers, whose claims have totaled $12,446.

Over the years, our pets go through birthdays, obedience school, moving cross-country (or just down the block), and then, some pups, like Tank, go through it all – emergencies, chronic conditions and accidental scares. For those pets, pet insurance can be life-changing. Find out how to protect your pet and be prepared for the unexpected by getting a free quote.