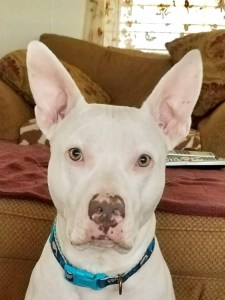 Pets with allergies can show a broad range of symptoms which can be caused by a myriad of culprits, both environmental (seasonal) and food-related. But what if your pup seems to be allergic to well, everything? Pet parent Deb knows all too well the struggles of a dog with major allergy problems – he’s not just allergic to chicken or pollen, he’s also allergic to people. Yep, that means her dog Finley is even allergic to her.

Finley, brother to the pup Rosie, came to Deb from a rescue in Delaware. “It was love at first sight!” says Deb. “He is a wonderful loving dog that is tolerant of anything and anyone.” He easily worked his way into his family members’ hearts, and shortly thereafter they were exploring the world together: “That first spring was a great experience – I took him out to the beach, on the boat – he loved swimming so much! But I did notice after our outings, he would be a darker shade of pink in his ears and around his muzzle.”

Deb didn’t think it was cause for concern; perhaps it could be sunburn or a mild irritation that wouldn’t pop up again. “Then out of the blue on a July day, I noticed after swimming in our community’s lake that he was scratching. Within a few short days, he started to show signs of scabbing on his neck and back.” Deb assumed it was his kibble, and after six months of food trials and vet visits, she was referred to a canine dermatologist. “In November, we went to the dermatologist and it was the start of finding out what was bothering him.” 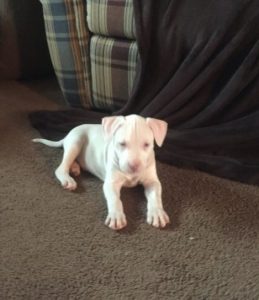 Finley as a puppy.

It was after a series of 64 shots that they finally pinpointed Finley’s condition. “We found out that Finley was allergic to everything you might find in your home – feathers, dust mites, wool… and even human dander. That’s right, he was allergic to me!”

The vet started Finley on allergy injections that Deb would need to administer at home; he needed two different vaccines that would be alternated every 10 days. Finley began to improve, but still had some skin conditions that wouldn’t heal, so they began a new vaccine called Cytopoint, which helps dogs with dermatitis issues find relief.

Additionally, Deb discovered that Finley was also allergic to chicken and chicken by-products. After a nutritional overhaul, they discovered he could eat a strict diet of kangaroo kibble – “with ground venison or salmon mixed in for a little extra flavor!” The new food, along with the allergy injections every ten days and the Cytopoint injections every 8 – 12 weeks as needed, has helped Finley find relief.

Allergies of all kinds account for a ton of pet health insurance claims – from the initial diagnosis to ongoing medical treatment. Allergies are the eighth most common reason why pet parents see the vet, so it’s no itching matter. Just like humans, airborne and food allergens can make cats and dogs miserable – but instead of affecting the respiratory system, they usually play out as extreme itchiness (which can result in redness, sores, scabs and alopecia). Overall, Finley’s condition has required a lot of maintenance, and Deb is a dedicated pet parent that has taken his ailment seriously. From the first claim to the most recent, Finley’s vet bills have totaled $4,909 and Deb has been reimbursed $3,427. 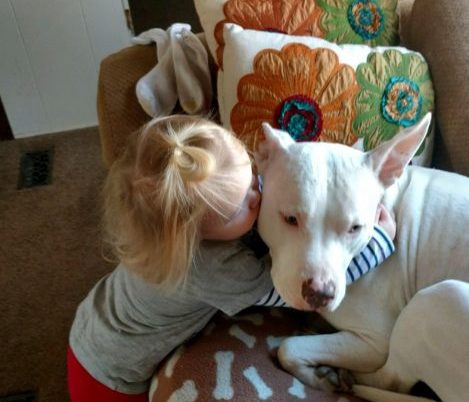 While there aren’t many things you can do to prevent allergies in pets, there are some tips that can help alleviate their symptoms:

Ultimately, food intolerance and allergies aren’t influenced by gender, breed, size, or even age; dogs and cats (and people) may develop them at any point in their lives. Insuring your pet before allergy symptoms are present means that this chronic condition can be covered for the lifetime of your pet’s policy.

Chronic conditions mean your pet will need continuous treatments over their lives. Enroll your pet in health insurance before symptoms arise, so your furry family member and your wallet are protected. Start by getting a free quote.