Blog / Animal Rescue / Who Rescued Who? One Couple Set Out to Save Dogs. The Dogs Saved Them.
Animal Rescue

Who Rescued Who? One Couple Set Out to Save Dogs. The Dogs Saved Them. 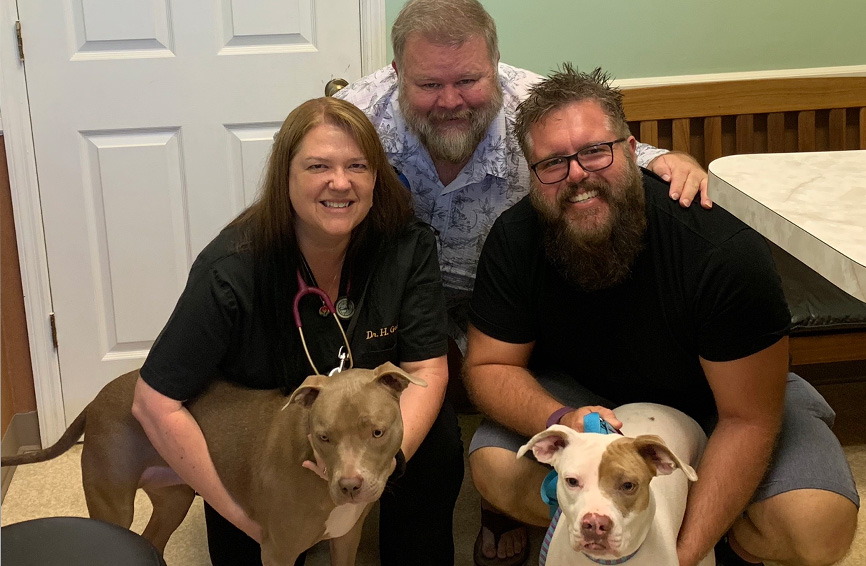 Healthy Paws customer Ryan and his husband Mike adopted both of their dogs – Mocha and Macchiato (they’re fans of Starbucks) from shelters in the Nashville, Tenn. area. Mocha is a timid mixed-breed terrier with light brown fur. Macchiato is also a mixed-breed dog with a brain condition that causes her to be a little off-balance.

Like so many people who don’t think they need a dog in their life until it happens, Ryan was at first reluctant to adopt a dog.

“I was NOT an animal person (when I met my husband),” he said. But Mike had a rescue dog that Ryan came to love until that dog passed away in 2015. Still, he was firmly against getting another pet. His husband kept trying to chip away his reluctance until Ryan finally said they could get a grey pit bull, thinking Mike would say “no.”  Instead, Mike suggested they go to the Metro Animal Care and Control (MACC) shelter “just to look.”

“Well, there was this shy little baby with the most beautiful green eyes. There was just something about her.  We took her out for a meet and greet and I fell in love,” Ryan said.

The dog was on a “stray hold,” which means the organization was waiting to see if someone claimed her as their lost pet, and that gave the couple a little more time to make a decision. Ryan was still unsure but he called every day to see if the pup was still there.

“One day, I finally told my husband to go get her.  And the rest is history,” he said.

One rescued dog leads to another

Soon Ryan’s resolve to not have pets eroded further when he saw a Facebook post about a dog that had been rescued from a neglect situation where she was chained up out back and mostly forgotten. This dog had a little tremor that was later diagnosed as cerebellar hypoplasia, which means the part of her brain that coordinates movement is small and does not work perfectly.

The brain condition can be genetic, and the poor pup was likely born with it. Ryan learned that the condition can remain stable or it can progressively get worse.

“We do not know if she will live a normal life expectancy or leave us in a few years.  We decided immediately that it simply did not matter how long we had her, she needed the rest of her days in this life to be filled with love, happiness, and a full food bowl.  I knew she needed to become a member of our family because my husband also has serious balance issues from an ear condition he has. Macchiato is literally his spirit animal,” he wrote.

Happily, a year later, the condition does not seem to phase her at all.  She has no health issues besides an occasional tremor, and she is content. She will often tumble and roll a bit, but it doesn’t bother her much, Ryan said.

Having dogs in his life has been nothing short of life-changing for this former “not-an-animal-person.” Before the dogs, he was always on the go, always needing to be busy. Now, he’s happy to be home and just spending time with the pups.

“Now I just really appreciate a brisk walk with the girls, cuddle time on the couch and I sleep so much better having one of them or both pushed up against me all night,” he said.

And for his husband, the dogs have actually been life-saving. Mike underwent a surgery that was expected to fix his balance issue, but the procedure made it worse.  Their hopes of Mike having a normal life again were dashed, and they went through a dark time. But the dogs have been there to comfort them.

Mocha, in particular, seems tuned in to the dizzying episodes he suffers. One night, Mike fell out of bed. Once he got back in, Mocha pushed him in towards the middle of the bed and slept on the edge to protect him from falling again.

“She just did that on her own. No training, no direction from us, just an instinct,” Ryan said.

‘Shelter pets are the best’

Ryan urges anyone considering a pet to seek out a local shelter.  He chose to rescue because he knew “there are a lot of dogs that have been through hell and back and just want a good home,” he said. He believes that potential pet parents can actually learn more about a dog or cat in a shelter than they would from a breeder because shelter staff and volunteers have worked with the pets and can share personality traits with adopters.

He also believes that his dogs appreciate them more as pet parents than a dog from a breeder might, because they have seen abandonment or abuse and they are grateful for a loving home.

“Shelter pets are the best. They are so loving and appreciative. You may think you are changing the life of the pet, when in fact, you are the one whose life will change.  The unconditional love of a shelter pet is unparalleled,” Ryan said.

It’s Clear the Shelters month. Learn more about the issues shelters and rescues face in the COVID-19 era and how adopting a pet is different now.