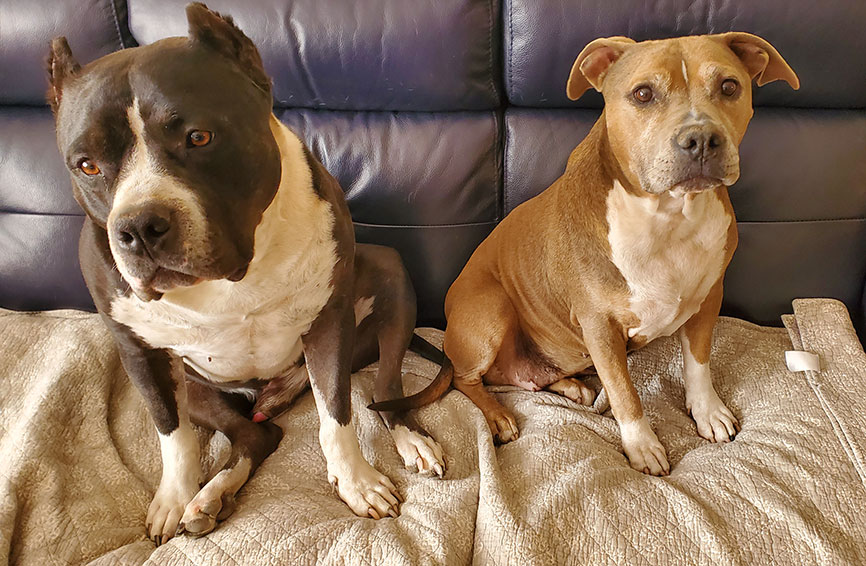 Megan of Albuquerque, N.M. has two dogs – Daisy and Elwood, both rescue American bully breeds about eight years old. Elwood is a big boy at 90 pounds, and Daisy is medium-sized at 55 pounds.

“Elwood is goofy and sweet and has no prey drive. He runs away and hides from conflict. If I’m sad, he lays on top of me like a giant weighted blanket. Daisy is the sweetest, and one of her favorite activities is to stare into people’s eyes. She radiates love at people,” Megan said.

Both dogs have Healthy Paws pet insurance plans, and Megan has been reimbursed more than $20,000 in the past two years due to multiple conditions affecting both dogs.

Megan signed up for pet insurance in 2019 when she lost her savings in a divorce and was worried about being able to afford care for the dogs should something unexpected happen.

Little did she know there would be a flurry of medical issues with each dog, especially Daisy, in a short time. She couldn’t be happier about her decision to sign up for pet insurance.

“The only thing Healthy Paws hasn’t paid for is prescription food. I would have had to take a second mortgage on my house to pay for all of this,” she wrote. “It turned out to be one of the best decisions I have ever made.”

Elwood started dripping bloody urine around the house in May 2020.

The vet performed an ultrasound which found an enlarged prostate. A biopsy found benign hyperplasia, a condition that generally only affects unneutered, older male dogs. This was strange since Elwood had been neutered before Megan adopted him at six months.

Megan had to do some detective work to figure out what was happening.

“He came with a certificate of sterilization and lots of belly staples from his neuter. It said he was cryptorchid (retained testicle) and presumably, the staples were from the original vet removing his retained testicle. I called his current vet and asked if it was possible he still had a testicle remaining. She thought it was highly unlikely but humored me by doing a blood test for testosterone levels. He had plenty of testosterone in there still,” she said. The high testosterone level indicated he did still have a retained testicle.

Elwood underwent exploratory surgery to find and remove the testicle. That left him with a 12-inch scar and countless stitches. The removed testicle was found to have a seminoma, a cancerous tumor. That meant an array of expensive chest x-rays and ultrasounds every three months to ensure it hadn’t spread. After 18 months, Elwood remains clear of cancer and is a healthy and happy boy.

Elwood’s health scare was just a warm-up for medical issues to come with Daisy. In January 2021, Daisy sustained a partial tear of her cruciate ligament (like an ACL tear in people).

Megan decided to outfit Daisy with a brace and do physical therapy to see if the leg would heal up, and it did. Now, a year later, her leg is functioning well.

But during her recovery from that, it was discovered she had two mast cell tumors. The tumors were surgically removed and fortunately turned out to be low-grade and less harmful.

Just two months later, Daisy killed a diamondback rattlesnake in the backyard – Megan believes she was protecting Elwood and another dog –  and received at least seven severe bites on her face. She spent three days in the intensive care unit, where vets administered five vials of antivenin.

She went home to continue her recovery, but it did not go smoothly. Some of her wounds became infected, and others were necrotic, which means the skin died and fell off.

“She was so sick and miserable,” Megan said. “Our amazing physical therapy vet came in on her days off and did cold laser therapy on her wounds, which I truly think halved her healing time. It was amazing.”

Even as her wounds were healing, she was not clear of trouble. A week after her release from the hospital, some follow-up bloodwork found she had developed immune-mediated hemolytic anemia from the snake bites. This condition causes the body to attack its own red blood cells.

“This is a terrifying diagnosis. She was immediately started on high doses of a drug to prevent blood clots and a steroid (Prednisone),” Megan said. “She started responding, but not enough, so a human immunosuppressant (mycophenolate) was also added.”

While her blood condition was stable and near normal for three months, Daisy had overall not improved. The steroid made her sick and she lost all of her muscle mass.

“She had no energy and was a shell of her former self,” Megan said.

Megan wanted an internal medicine specialist to look at Daisy. The only one in the Albuquerque area was booked out for four months, so she drove nine hours to a specialist in Phoenix, Ariz., to get her in the following week.

Getting another opinion turned out to be another great decision. The specialist ran a battery of tests and found that Daisy also had pancreatitis, a swelling of the pancreas, and Inflammatory Bowel Disease (IBD), a condition resulting from infiltration of the gut wall with inflammatory cells.

The specialist started stepping her off the Prednisone immediately. Daisy’s bloodwork improved, and her energy returned. She is now completely off Prednisone and will be off the immunosuppressant in a couple of weeks. Then Daisy will take a B12 supplement and prescription food for pancreatitis and IBD.

Recently, Megan found some spots and a new bump on Daisy’s lip that she thought might be another mast cell tumor. Fortunately, this time, the biopsy came back negative, and it turned out to be a treatable infection.

Insured pet parents providing testimonials in this report have not received compensation for their statements.